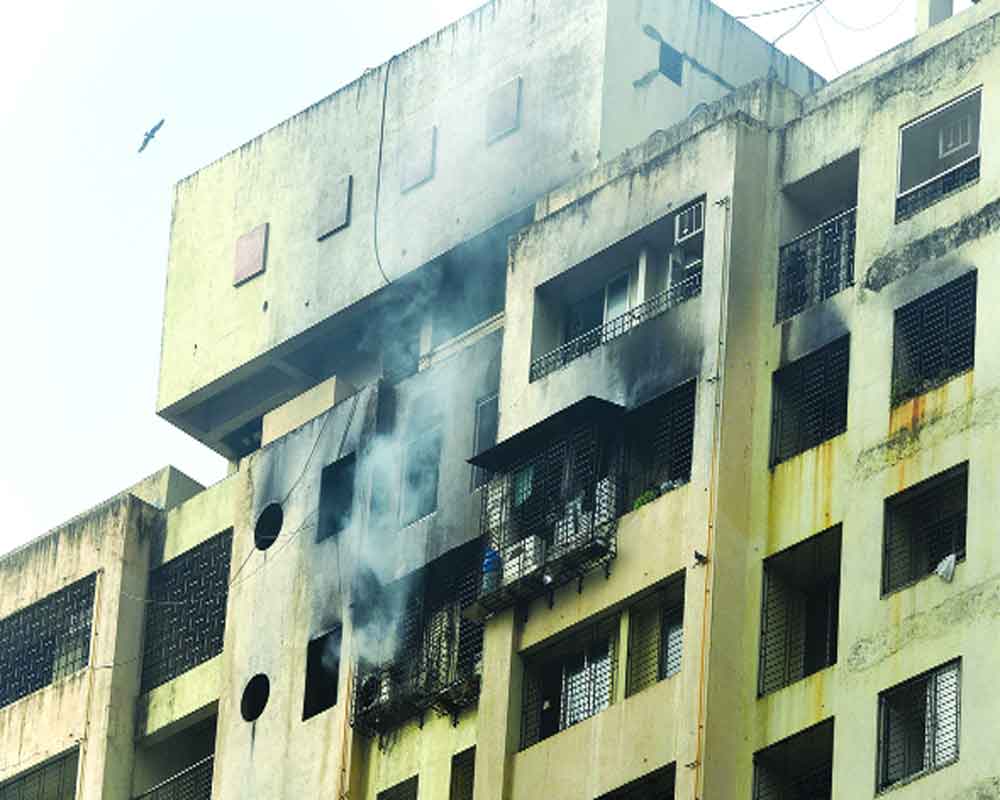 At least seven persons were killed and 23 others injured when a massive fire broke out in a 20-storey Kamala building located in front of Bhatia Hospital at the bustling Nana Chowk-Gowalia Tank area of Grant Road in south Mumbai on Saturday morning.

The fire erupted on the 18th floor of the high-rise building around 7.15 am. Of the 30 persons injured in the fire, seven succumbed to burn injuries, while the condition of six persons was reported to be “critical”.

While six persons, including two women, died in the early part of the day, one person succumbed to burn injuries in the evening. The injured have been admitted  to Kasturba, Nair, Masina, Bhatia and Reliance hospital. Of the injured, seven were treated and allowed to go home.

The Mumbai Fire Brigade designated it as a Level-3 (major) fire. In all, 13 fire tenders, seven water tankers, and snorkel ladders were involved in the fire fighting operations. The fire brigade extinguished the fire at 12.20 pm.

Though the cause of fire has not been established, the massive plume of smoke emanating the fire-hit building enveloped south Mumbai skies, causing considerable anxiety among the residents in the neighbourhood.

In a related development, Maharashtra’s Deputy Chief Minister Ajit Pawar announced that the cause of the fire mishap would be investigated.

Mumbai Suburban district guardian minister Aaditya Thackeray and Mumbai City District Guardian Minister Aslam Shaikh also announced that the incident would be looked into. “In touch with the authorities regarding the fire outbreak at the Kamala building in Tardeo. The fire brigade and the police are on site. Rescue and cooling operations are underway,” Aadirtya tweeted.

Mumbai mayor Kishori Pednekar visited the affected and hospitals to inquire about the injured. Locals claimed that some of the private hospitals refused patients.  “We would look into it. This is a serious issue,” she said.

“I am shocked to know nearby hospitals refused admissions to the injured persons, which resulted in more deaths. If it is true then, BMC and State administration should fix the responsibility for these deaths and take action against those who are responsible for the d*eaths,” leader of opposition Devendra Fadnavis of the BJP said.

Aaditya, however, said: “There were reports about two hospitals refusing treatment. However, both the hospitals informed me that they have admitted and treated some of those injured in this fire.”

The inquiry ordered by the Maharashtra government will among other things look into whether the internal fire-fighting systems were operational at the time of mishap.

Saturday’s was the sixth major fire mishap in Maharashtra in less than a year. Earlier on November 5 last year, as many as 11 Covid-19 patients died and six others sustained burn wounds after a massive fire broke out at the Intensive Care Unit (ICU) of a civil hospital in Ahmednagar district.

On June 7, 2021 at least 15 workers were killed and 20 others rescued, when a massive fire swept through a chemical factory at an industrial area at Urwade in Mulshi tehsil of Pune district.

Earlier on April 29, four patients were killed when a major fire broke out at Prime Criticare Hospital at Mumbra’s Kausa area in Thane district. On April 23, as many as 14 Covid-19 patients died in the early hours of Friday, when a fire swept through an Intensive Care Unit (ICU) of a pandemic hospital at Virar in Maharashtra’s Palghar district.