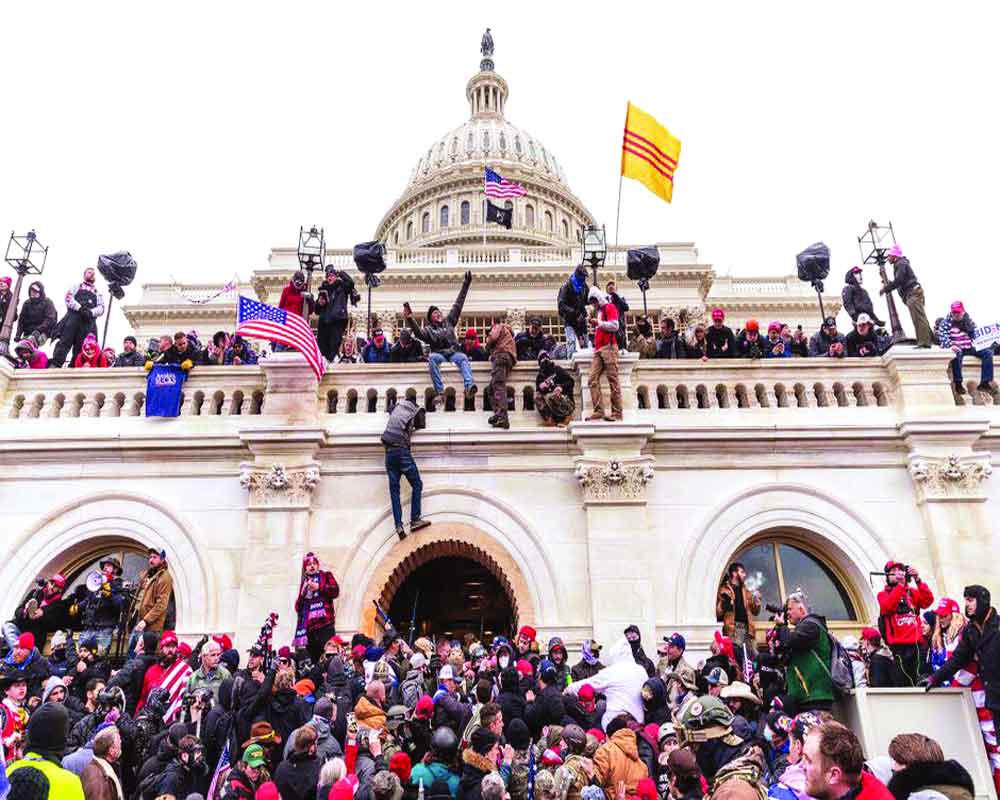 Most of the global observers, analysts, media commentators and mandarins are taking a long view of the insurrection which occurred at the Capitol Hill on January 6, 2021. The key motif was that former President Donald Trump refused to accept the electoral victory of candidate Joe Biden who had won at the hustings. Now, the quizzing of Trump’s aides at the White House, along with the abortion debate, has touched a raw nerve in the larger political vortex of the US.

Personages such as Steve Bannon, Meadows and former Governor of New York City Rudy Guiliani have been interrogated and have deposed before both the Senate Hearings Committee and a historical enquiry undertaken by the US Justice Department. Interestingly, the US Justice Department states that the enquiry initiated by it has no precedence in the US keeping in view the nature and scope of the posers on the aggrieved ethos of democracy in the US.

After the enquiry in the case study of President Nixon’s impeachment, it is the first instance of both the Senate and the Justice Department taking up the task of quizzing the highly seated perch of Trump. Even his daughter Ivanka and Jared Kushner, her husband, have not been spared the exigencies of the Justice Department enquiry. Such is the high pedestalled mandate of the hearings on the Capitol Hill insurrections, which brings yet another tumult in the political circus in the US.

Does the dictum of “no one will be spared if found guilty” work so effectively in the American homestead?

Donoghue showed handwritten notes he had taken during a call with Trump, in which the former President said, “Just say the election was corrupt and leave the rest to me and the Republican congressmen.”

The recent outreach by the Senate and the Justice Department hearings pinpoint the complicity at the highest level at the White House as far as the mayhem which ensued in the Capitol Hill is concerned. Also, as an attendant fact, the entire nation and the world are looking askance at a daze as one of the sacrosanct symbols of democracy in the American nation was pillaged upon and it has found in the subsequent hearings that the several key officials fled the scene of the insurrection as the protesters ruthlessly stormed the heady portals of the Capitol Hill. How they managed to breach the security establishment has stirred up a hornets’ nest for the conspiracy theories to churn out their versions of the ghastly and deplorable incident.

The current tirade is targeted at Trump as he corrected and re-corrected the notes which he had given to his White House aides and nowhere did he completely belittle the insurrections as he had been informed in advance by some of his aides that the public and shameful carnage was expected in the Capitol Hill. The debate, accusation and counter accusations are being bandied about, and the relentless search for truth goes on as a stately continuum in the Capitol Hill’s insurrections enquiry. The US Senate releases inform us that even in the past, the ilk of Vice Presidents and even the Presidents have been brought to the cage and interrogated which pinpoints the stately and traditional ideal of “no one is above law” as has been dexterously and assiduously adhered to in the establishment’s fray in the US.

One can cite a US Senate source which pithily informs us that how the process dates back to the 19th century when President Abraham Lincoln was quizzed about a ticklish matter pertaining to the fourth estate. The Senate’s portal informs us that, “President Lincoln today voluntarily appeared before the House Judiciary Committee,” reported the New York Tribune, and gave testimony in the matter of premature publication in the Herald of a portion of his last annual message.

Lincoln’s message to the Congress in December 1861 had been published in the New York Herald on the same morning that it was sent to Capitol Hill. The House Judiciary Committee, chaired by John Hickman, investigated the leak and called Herald correspondent Henry Wikoff to testify. Wikoff refused to divulge his source, citing “an obligation of strictest secrecy.” It can be argued that when the American nation was creating its own “self” through invention, innovation and experimentation through territorial purchases, reviews of the political process and further external inventions in nations such as Spain and the Philippines, then at that point of time the nation spared no one and the posers are a part and parcel of the general narrative of the grandiose march ahead of the American nation and civilisation.

The United State’s Senate Resolution number 60 spawned the Senate select Committee on the election campaign activities of President Nixon and it came to be popularly known as the Senate Watergate Committee which shook the entire soul of the American population as the US had just emerged out of the military and diplomatic debacle in Vietnam and the grandiose notion of the entrepreneurial and rules-based America had taken a beating.

The allegations on the American President ranged from campaign finance procedures and the practice of state espionage which cast a dreary shadow at the one-upmanship of the American political system. Sam Ervin chaired the Watergate Committee and indicted around 40 State department officials and its findings played a key role in ushering in the impeachment proceedings of President Nixon in the stupendous seventies when questions were being asked for the first time and the city on Mount Sinai had to look inwards and a stately and timely delving in exercise was comprehended as the political need of the hour.

In the case of the January 6 insurrection, the testimony of Cassidy Hutchinson proves evidence of the complicity of the White House when the secret service guards in and around the Capitol meticulously ignored the scare signals for the portending disturbance at Capitol Hill. Though, those days will historically go down as a blot on the zeitgeist of the grandiloquent American “way”, such scuffles and hiccups come and go and are never indelible in nature as America and the rest of the nations steady themselves in the rumbustious lurch of the Ukraine war, the pandemic and other internal challenges asking questions at the American “way.”