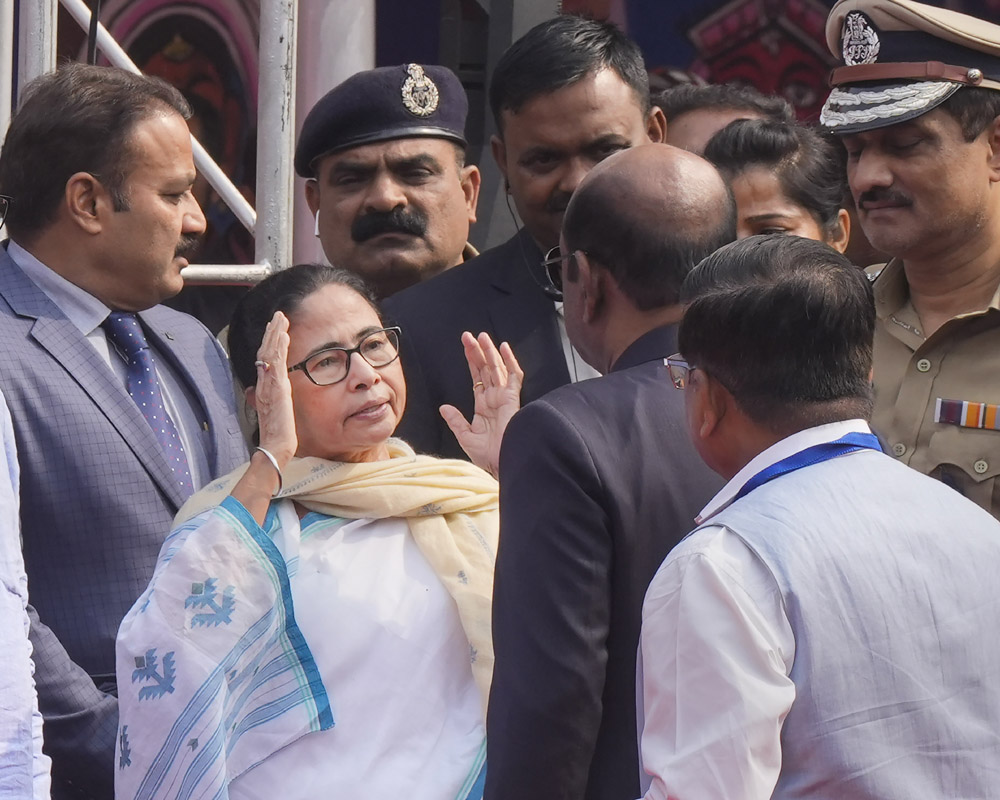 A controversy erupted at the inauguration ceremony of West Bengal's first Vande Bharat Express on Friday morning as irked by 'Jai Shri Ram' slogans on her arrival Chief Minister Mamata Banerjee refused to share the dais.

Instead, throughout the programme she sat on a chair adjacent to the dais. From here she expressed her condolences over the demise of Heeraben Modi, the mother of Prime Minister Narendra Modi.

As soon as the chief minister arrived at the inauguration venue at the Howrah Station on Friday morning, the BJP supporters present there raised 'Jai Shri Ram' slogans.

Union Railways Minister Ashwini Vaishnaw, who was present on the dais, then tried his best to control the BJP supporters and requested them to refrain from shouting slogans.

The chief minister however refused to come on the dais. The railways minister was seen pleading to her again and again to get on the dais, which she refused.

Soon the state governor, C.V. Ananda Bose reached the venue and was seen interacting with the chief minister. Initially, she even refused to deliver her speech on the occasion. However, following repeated requests from the governor she agreed to deliver the speech, which she did without getting on the dais.

This is not the first time that the chief minister has expressed her objection to raising the 'Jai Shri Ram' slogans on her arrival. On January 23, 2021, on the occasion of celebrating the birthday of Netaji Subhas Chandra Bose at Victoria Memorial Hall in Kolkata, the BJP supporters shouted slogans. Prime Minister Narendra Modi and other Union ministers were present on the occasion. Expressing her grievance over the development at that point of time, the chief minister said that any government programme should follow certain decorum. "It is unwise to insult any invited person at such a function. So, in protest I refuse to say anything here. Jai Hind. Jai Bangla," she said on that day.

Meanwhile, a political slugfest erupted over the development on Friday morning. State municipal affairs & urban development minister and the Mayor of Kolkata Municipal Corporation, Firhad Hakim said, "Jai Shri Ram should be said in a temple or house with a pure mind. But the BJP supporters are using this slogan to irritate our chief minister. Had we wished we could have stopped them immediately. But we believe in political courtesy," he said.

The BJP Lok Sabha member, Locket Chatterjee said that the Jai Shri Ram slogans were raised when the Prime Minister appeared online to inaugurate Vande Bharat Express. "The slogans were not raised to irritate the chief minister," she said.