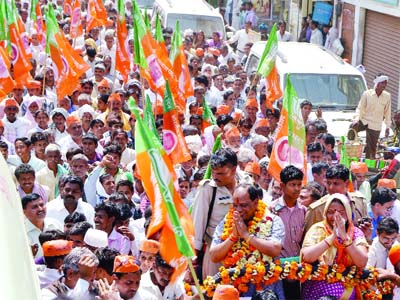 An intense proxy battle is raging between the two powerful OBC stalwarts of the BJP and the Samajwadi Party (SP) in one of the most backward regions of Uttar Pradesh. While former Chief Minister Kalyan Singh’s son Rajbir Singh is the BJP candidate here, SP chief Mulayam Singh Yadav has placed his prestige at stake here by fielding his close aide Devendra Singh Yadav.

Not long ago, both Kalyan and Mulayam addressed joint public rallies by criss-crossing the State in the same helicopter. Then Kalyan was part of the SP bandwagon. For the politically aware residents of Etah town and village, the constituency, which was represented by Kalyan in 2009 before he resigned to join the BJP in March this year, has become a political akhara where Netaji (SP chief Mulayam Singh Yadav) is determined not to succumb to the heat of Modi wave that has gripped the State.

Kalyan Singh returned to the BJP fold at Modi’s “Vijay Shankhnad Rally” in lucknow early last month after resigning from the lok Sabha. He could not join the BJP earlier due to possible disqualification from Parliament as the outfit he had formed after quitting the BJP, during 2009 lok Sabha elections, merged with the BJP in January 2013. At the time of the merger, his party was headed by his son Rajbir.

After the 2009 polls, Kalyan and Mulayam parted ways as Muslim voters could not swallow the presence of the former in SP, forcing Kalyan to launch his own political outfit. In the 2012 Assembly polls, SP wrested six of the of eight Assembly seats of Etah Parliamentary constituency held by BJP while Kalyan’s Jankranti Party faired badly. Repeating the performance of the Assembly polls will be a major challenge for Yadavs (Mulayam and his son Chief Minister Akhilesh Singh Yadav).

The voters of Etah are, however, caught in the midst of high-profile campaigning. Dominated by lodh, Yadav and Rajput voters, the region is a stronghold of both Kalyan and Mulayam. Mulayam was elected to Nigholi Kalan in Assembly seat under this lok Sabha constituency in 1993. “We have seen the duo making helicopter sorties umpteen numbers of time in the company of their sons.  We remember a rally in 2009 when Netaji asked the electorates of Etah to make his jigdi yaar (Kalyan Singh) victorious by record number of votes. But this time, the voters are faced with a powerful Modi-wave and Kalyan’s return to BJP,” said Prahlad Singh of Awangarh, a political activist in the main town of Etah where development and caste politics are divergent poles.

Prahlad’s companion reminded extract of the same speech “Main (Mulayam) Kalyanji Ka Saarthi Hoon. Agar Yeh (Kalyan) Nahi Jeetey To main daagdar ho jaunga”. However, in larger perspective, the battle hers is between two powerful individuals where there is no place for ideology. Few would forget the “compromise” the two leaders made to work together.

“Ideology seems to have taken a backseat. Both the enemies joined for a common cause and again drifted. In the wake of Modi wave one would be seen as an opportunist, the other a sympathizer of other religion,” summed up Aadhar lodh, a youth from Umargarh in Etah doing his higher education from Kanpur.

In a very brief interaction with The Pioneer during his hectic public meeting in the main town, Kalyan Singh said that ‘Modi’s leadership and workers’ action would help the BJP emerge victorious.” When asked about his relationship with Mulayam Singh Yadav and whether Etah will be a litmus test for both, Kalyan Singh quipped, “ “there is a Modi wave as of now which would turn into a storm till the voting day”.