Bloody welcome for the new Governor

Bloody welcome for the new Governor 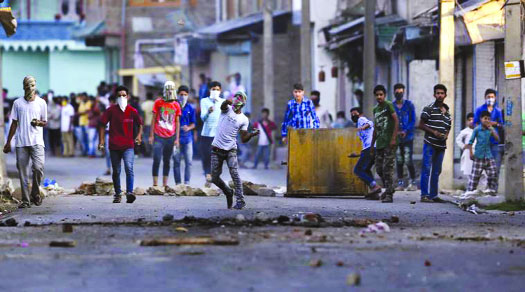 Forces inimical to the return of peace in the Kashmir Valley have succeeded in their intent of signalling the many challenges the new Governor will face during his tenure. Patience is a virtue but procrastination in taking on radicalisation is not

Last month, Kashmir witnessed one of its most violent and bloodiest Bakrid in the recent time; just a day after the announcement was made of the appointment of a new Governor in Jammu & Kashmir. Was it a coincidence or a planned effort to send a few signals to the new Governor? Violence after Eid prayers is not unusual in Kashmir but this time its intensity and audacity was definitely different from the past. There are a few deductions from the happenings of this Bakrid which may ultimately emerge as new challenges for new Governor, Satya Pal Malik.

Hizbul Mujahideen claimed responsibility for most of the killings. Sayeed Salahudeen, head of the terror outfit and chairman of the United Jihad Council (UJC), continues to live in safe-haven in Pak-occupied Kashmir under the patronage of the Pakistan Army and the Inter-Services Intelligence (ISI). Thus, a clear-cut connection exists between the killings and Pakistan’s hand behind it. A change of regime in Pakistan is not going to make any difference as far as violence in Kashmir is concerned. New Pakistan premier Imran Khan does not have the mettle and political experience to challenge the ‘K Policy’ of the military-mullah-militant troika.

Pakistan has no respect for religion or Islam. Bloodshed in Kashmir on the occasion of Eid-ul-Zuha does not perturb the troika over there. In fact, it emboldens the troika since it suits their sinister design of keeping Kashmir on the boil. The troika does not want the Kashmiris to live in peace and enjoy the dividend of development and progress in the rest of the nation. The troika’s aim is to keep Kashmir in a constant state of conflict so that it can tie down the Indian Army in counter-infiltration and counter-terrorism operations and make sure that it does not pose a major threat on its western borders.

Brutal killings of a political worker and a couple of policemen is a serious cause of worry. The jihadists are motivated by an IS ideology. The IS may not have a footfall in Kashmir, but its ideology has penetrated other jihadi terrorist groups active in the Valley. The ideology justifies the use of violence as a necessity to defend Islam and as an obligation for a true Muslim believer. The IS believes in the concept of the ‘Caliphate’.

Democracy and the nation-state are not compatible with the Salafi-jihadist ideology. Anyone serving the nation is an enemy of Islam as per this ideology. This is the reason for targeting the members of the police, Armed Forces and political workers. The IS is no threat to India but its ideology is, which is also responsible for the spread of radicalisation.

The IS ideology also threatens the Kashmiri society. Kashmiri culture is a mix of three religions — Hinduism, Buddhism and Islam. Kashmiri culture, that was once proud of its oneness, irrespective of religion, is in danger of being overshadowed by Salafi-jihadist ideology that preaches a return to true Sunni Islam and justifies use of violence and terror to realise political objectives. It is a major challenge the civil society in Kashmir has to accept and unite to fight against.

Another fallout in Salafi-jihadist ideology is radicalisation. It is spreading in Kashmir like poison. Stone pelting on police personnel on duty, display of IS flags and Musa Army banners, attack on Army posts and heckling of Dr Farooq Abdullah at the Jama Masjid are all manifestations of radicalisation. Zakir Musa is also emerging as the new cult and poster-boy of terrorism in Kashmir. His message on the eve of Eid to the terrorists was full of hate. He warned of Ghazwa-e-Hind (the final and last battle for the conquest of India), a threat which re-emerges year after year for reasons not understood.

The entire concept of Ghazwa-e-Hind is nothing but a religious fantasy to raise the morale of Sunni Muslim jihadists. Radicalisation promotes a thinking process of transition from true Islam to the Islamic State. Zakir Musa is spreading this concept in Kashmir which the youth appears to be attracted towards. Was it a signal intended at the incumbent Governor? To me it appears so.

Fiery speeches were made on Article 35A and other anti-national issues prior to and after Eid prayers. It aroused the sentiments of the youth who were motivated by paid goons to move out and indulge in a show of force (using pre-dumped stones) against the police personnel deployed there. It goes to the credit of the policemen that they did not get provoked and retaliated with non-lethal weapons of crowd dispersal, despite instigations.

Lack of adequate knowledge about religion or distorted knowledge of religion amongst the youth also leads to radicalisation because a ‘vacuum of knowledge’ leaves them ill-equipped to reject extremist ideologies. This is the reason that hate speeches delivered by the maulvis after the Friday prayers or during other religious congregations and also the ideologies spread by the them in certain madrasas act as catalysts to radicalisation.

The IS has deliberately tailored its propaganda to appeal to those with little religious knowledge. Radical preachers and hardcore Salafi-jihadists, when kept together in prisons with juvenile stone-pelters, radicalise them beyond redemption. Therefore, to give amnesty to such youth and return them to the mainstream is like playing with fire which has proved unsuccessful time and again because the same youth gets recycled into sangbaazi (stone-pelting).

In a society that has been engulfed by a state of conflict for the last three decades, paternal absence and exposure to the messages of radical preachers could also lead to radicalisation. Keypad jihadists spreading radical ideology can be another source of radicalisation.

In Kashmir, a perceived sense of discrimination, false promises by politicians, denial of justice, harassment by security forces and fear of losing their monolithic culture are also driving the youth towards radicalisation. What the new Governor can do immediately to counter radicalisation is to have a check on the maulvis and other religious preachers. Majority of them are non-locals who spread Salafi-Wahabi ideologies using the precincts of religious places and madrasas. Local preachers, who follow and preach Sufism, have been sidelined by them through the power of petro-dollars. The Salafi-Wahabi preachers need to be replaced by Sufi preachers and the former must be ordered to return to their respective native States.

The heckling of Dr Farooq Abdullah, a sitting MP and four-time Chief Minister of the State and preventing him from offering Eid prayers at Jama Masjid because a couple of days back he had shouted, “Bharat Mata Ki Jai” and “Jai Hind” at the top of his voice in a gathering at New Delhi, is also an act of defiance. To shout slogans, and hoot while prayers are being offered and khutbah is being delivered, is against the basic tenets of Islam. The behaviour was completely un-Islamic. But who cares when it is being done at the behest of somebody else, as a part of the larger agenda.

A section of misguided people were also shouting azadi slogans. Seekers of azadi need to understand that they are living in an utopian world, much divorced from reality. Misguided youth are being exploited by self-seekers whose own children are studying in posh schools and universities outside the State and abroad. It is a dream sold to the youth to motivate them to pick up the gun. It has not been achieved in the past seven decades and would never be achieved — this is the hard reality the youth need to realise. Radicalisation has hardened and brainwashed the local youth to the extent that they are not ready to accept the reality of Jammu & Kashmir being an integral part of India, as enshrined in Article 1 of the Constitution of India and Article 3 of the State’s Constitution.

Dr Farooq Abdullah rightly asserted that these misguided people need ‘counselling’. All nationalist voices in Kashmir have condemned this unruly behaviour of a section of the people. Dr Farooq called them as “enemies of the state” and said that he knew who were the people behind it. “You will pay a very heavy price for this one day. They don’t want peace and they are thriving on violence,” he said.

The forces inimical to return of peace and normalcy in trouble-torn Kashmir have succeeded in their intent of according a “bloody” welcome to the new Governor and also signalling him of the challenges he will face during his tenure. To my mind, radicalisation is the major challenge which the Governor or any other Government can ill afford to ignore anymore. It needs to be tackled on war-footing along with counter-terror operations. De-radicalisation is time-consumingand lustreless akin to de-addiction. Patience is the main virtue that will pay in the end but it cannot be brushed under the carpet anymore.

(The author is a Jammu-based political commentator and strategic analyst. The views expressed are entirely personal.)