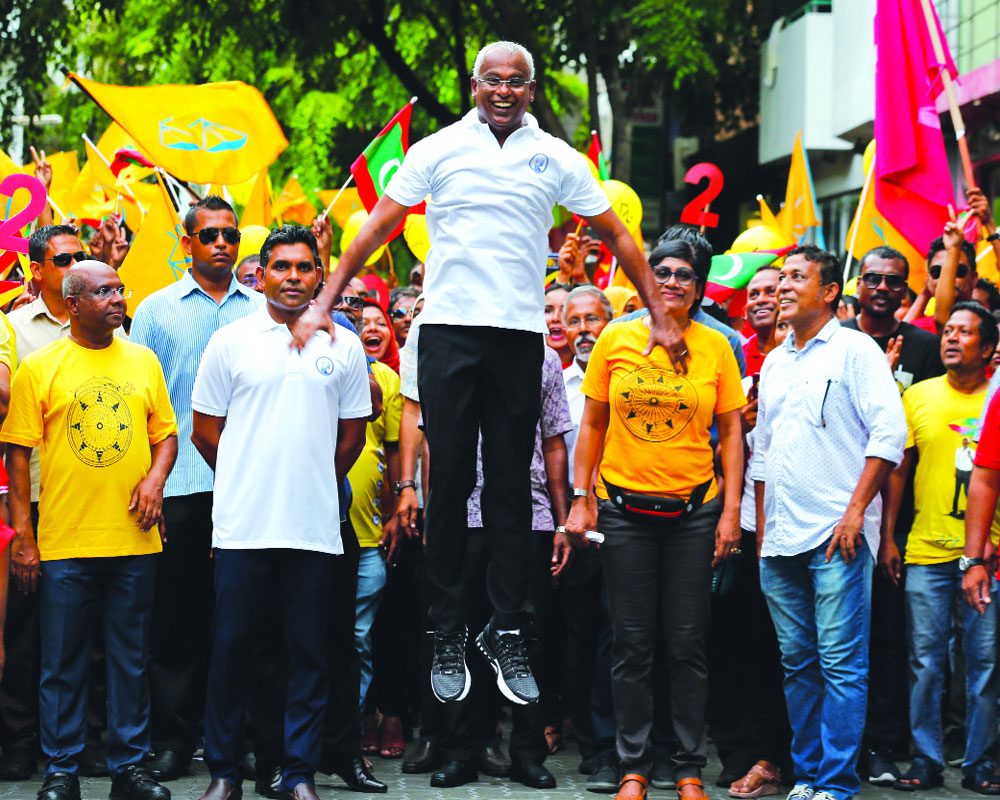 The Maldives, the Indian Ocean archipelago, heaved a sigh of relief last Sunday. Much talked about presidential election in the island nation has heralded the new phase of democracy. Opposition candidate Ibrahim Mohamed Solih’s triumph over iron-fisted incumbent President Abdulla Yameen has reflected the age-old Latin adage Vox Populi, Vox Dei (Voice of the people is the voice of the God) in the popular mandate.

Truly speaking, the voters have shown indomitable courage and conviction. The majority of them demanded an immediate recall of Yameen as they accused him of extending the shadow regime of Maumoon Abdul Gayoom. But then Yameen was also more paranoid and disturbed by the fast growing Opposition unity in the country.

What has really propelled the victory of a candidate of an Opposition alliance against an all-powerful Yameen? Succinctly, the 2018 presidential election was symbolic for the political community and for the populace of the Maldives. Solih is no political novice anymore. He was elected to Parliament at the age of 30 by defeating a ruling party candidate. He was one of the founding members of the MDP, which came into being in November 2003. And, he served as an MDP MP for three five-year terms. He was made the leader of the MDP in the People’s Majlis (Maldivian Parliament) in 2011, a unicameral legislative body, even when Nasheed was the President of the country. However, Solih’s political clout among the masses grew with the absence of Nasheed from the political firmament — first ouster from power, imprisonment and later exile. But, Solih received a political breakthrough when he was named a joint presidential candidate for an Opposition alliance in July 2018 by the MDP, the Jumhooree Party and the Adhaalath Party. This also happened when Nasheed formally relinquished his plan to contest the presidential poll. Besides, what finally shepherded Solih to victory was his clean public persona against the exposed façade of a recalcitrant, corrupt, authoritative and boisterous Yameen. People longed for a change at the establishment in Male. It culminated in the unexpected rise of an unlikely ‘hero’ Solih, who was able to upstage Yameen.

This is the third multi-party election held in the Maldives since 2008, when the international community recognised the first ever democratically elected head of the Maldives — Mohammed Nasheed, a young progressive leader who took over from seasoned dictator Gayoom and signaled a gradual transition towards a full-fledged democratic Government.

However, the island’s history is replete with the history of one-upmanship. Troubles in the Maldives politics started even during the early days of its first president Gayoom’s rule since 1978 to 2008. His three decades of reign was reinforced by a corrupt autocracy, accompanied by his proverbial iron-fist. The first spell of native rule, after its transition from the British colonial yoke, set the tone for future autocrats in the country. Though there was relative calm in the archipelago for 30 long years, Gayoom had to shrug off multiple coup attempts in his long and eventful rule. But being a wily tactician, he managed to survive till the last day of his rule. Despite being a ruthless ruler, he found it difficult to ignore incessant waves of democracy hovering around Maldives. Precisely, the credit for introducing multi-party democracy goes to Gayoom only. It was he who brought a new Constitution that provided a system of multi-party electoral competition. Eventually, this unique provision in the Constitution gave an opportunity to Nasheed, a former political prisoner, to inflict a historic defeat on the longest serving President of the island. But, it was an uphill task for the newcomer to match the political tactics of Gayoom to survive in power for long. Actually, it happened and he could not complete his five-year term. By 2012, Nasheem had to resign after a police mutiny and weeks of demonstrations against his Government around the country. His supporters and the MDP considered it as a coup against the first democratically elected President of the country. Gradually the political scene of the country changed in Gayoom’s favour. He won the run-off election against Nasheed in 2013. Later, Nasheed was arrested on terrorism charges and sentenced to 13 years in prison, and afterwards, he managed to leave the country for London for medical treatment in January 2016. Since then he is in exile.

By March 2017, the Maldives was about to see another role reversal as the Opposition lawmakers tried to wrest the control of the Government from Yameen. But, it failed and since then the President became more sensitive towards the activities of all Opposition groups, including local media, social activists and a section of foreign media outlets. The worst came for the Yameen regime when the country’s top court ordered his Government to release all convicted politicians including ex-President Nasheed. He promptly refused to enforce the court order and declared a ‘State of Emergency’. Subsequently, the Armed Forces arrested two judges and the most daring and unbelievable act performed by the Yameen establishment was the jailing of Gayoom, his son Faris Maumoon (a legislator) and son-in-law Mohamed Nadheem. He curtailed Press freedom in entirety. The crackdown exposed his demeanour as to how log he can go to save his regime. All these were viewed as cruel attempts by Yameen to stay in power for longer, and he made it clear that he would not tolerate any challenge or Opposition to his rule. Around the same time, exiled Nasheed called for an intervention by the Indian military to restore normalcy in his country. In fact, some sections in India also advocated for an early intervention in the island neighbour.

During the course of his five-year ignominious rule, Yameen distanced himself from India and inched towards China. Nasheed had developed cordial relations with India and the relationship went to seed when Yameen took up the reins. He even asked India to take back its Army choppers, restricted the number of work permits for Indians and drifted towards the Xi Jinping regime. He went on to ink a free trade agreement with China. The Maldives soon became part of China’s “One Belt-One Road” initiative; and Yameen posed himself as big nationalist.

However, Solih declared that his party is interested in rolling back or reconsidering Chinese infrastructure projects signed during Yameen’s presidency. In the past, Solih accused Beijing of “busy buying up the Maldives”, but how he will turn his presidency towards an India-centric route will be worth watching. Meanwhile, Beijing has reacted cautiously, saying, “We hope that the Maldives side can preserve continuity and stability of the relevant policies”. Many regional experts are of the view that China’s massive investments may leave the island nation into a debt trap in the near future.

Whatsoever it may be, the country lies at the heart of a much bigger strategic power play in the Indian Ocean. Its more than 1,000 islands stretch 800 km into the Indian Ocean. All these islands straddle critical sea routes, prosaically named bottleneck known as “One and a Half Degree Channel”. That is why this tiny nation has become a pawn in the regional power game. But, Solih’s Government at Male has potential to change the course for the mini-Cold War between Delhi and Beijing in the days to come.

Yameen’s admission of defeat in the presidential polls was strange in the background that there was suspicion that Yameen may delay his departure from power on some or the other reasons. Even Nasheed, who had predicted mandate against the incumbent President, doubted Yameen’s reactions to he poll result and hence even before the results were declared, he had appealed to the international community to reject the outcome of the rigged polls.

Latest media reports say that Yameen is trying to cling onto power despite conceding defeat in public immediately after the declaration of the poll results. It is disturbing not only for the country, but also for the entire South-Asian region. By now provisional election results have been declared. The formal election results are not yet declared by the Election Commission. When Yameen completes his five-year term on November 17, he is supposed to hand over power to Solih.

Meanwhile, rumours were rife that Yameen may postpone the declaration of the formal results. And, this he could do by filing an election petition seeking the delay of the announcement. The chief of the Election Commission already said that Yameen’s party has brought to notice many instances of voting irregularities in this poll. The speculation was emboldened by no release of high-profile political prisoners such as Gayoom.

“There were accusations... Against all five members of the commission, and we received death threats via phone calls... But we didn’t consider the threats at all because the security forces are providing all five members with security,” said Shareef.

However, what had reassured the common Maldivians about a possible fair play are the two strong statements released by the chief of the Military and the Election Commission. Major General Ahmed Shiyam aired his view through a private TV channel saying, “I want to assure the Maldivian people that the military will protect the will of the people.” And, the chief of the Election Commissioner said there were no grounds for Yameen to delay the announcement of the formal results.