No place for minorities in Pakistan

No place for minorities in Pakistan 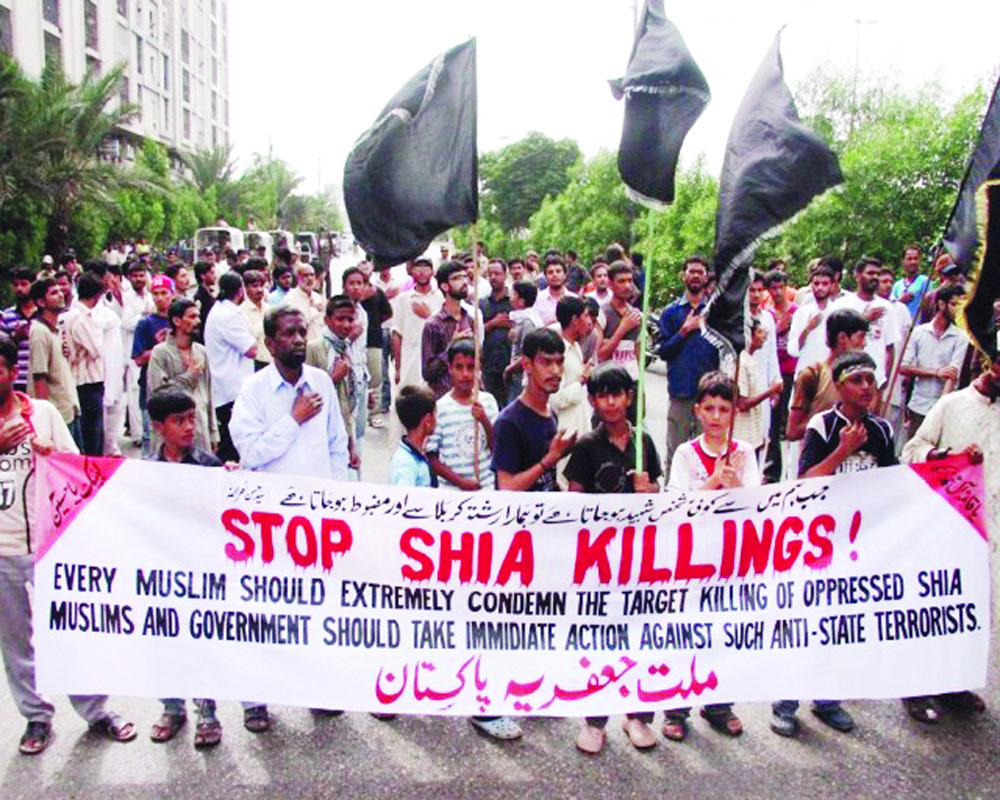 Soon after his appointment to the Economic Advisory Council, Pakistan Prime Minister Imran Khan Niazi was induced to remove Dr Atif Mian because he is an Ahmadiyya, which is a Muslim 'sect' considered blasphemous by mainstream Sunnis. Two other economists, although Sunni, namely Dr Imran Rasul and Dr Asim Ijaz Khwaja, disapproved of the action and resigned. Ahmadiyyas believe themselves to be a sect of Islam, but in Pakistan, orthodoxy had them expelled some 50 years ago. The concept of a minority does not sit well in Islam and Pakistan was created as a Muslim holy land or Darul Islam. Anyone who is not a Muslim is looked down upon as a non-believer or a kafir who can theoretically be made to pay jizya and is de facto a dhimmie or a ‘protected’ or inferior citizen. S/he may, of course, be offered conversion to Islam, or alternatively enslaved or exiled or killed according to doctrinal law. No minority, therefore, has a future in Pakistan.

If there was any doubt whatsoever on this score, it was removed by the cruel and expeditious manner in which Hindus and Sikhs were killed or chased out by early 1948. In East Pakistan, the process was slower but equally callous. This religious cleansing was consistent with what Justice MC Chagla wrote in his autobiography entitled, Roses In December: “To Pakistan everything is communal. She cannot understand how Hindus and Muslims can live peacefully and have the best of relations. Pakistan’s philosophy is that in the very nature of things Muslims must hate the Hindus and the Hindus must hate the Muslims. If Hindus and Muslims constitute two separate nations, then the inevitable result must follow that the 50 million Muslims in India are aliens in their own homes.”

Following the disposal of Hindus and Sikhs, the next round of minority purging was inaugurated against the Ahmadiyyas or Qadianis. During the late 19th century, a devout Muslim called Mirza Ghulam Ahmad of the Qadian township in Gurdaspur district of east Punjab reportedly saw a divine vision. A significant number of people followed his leadership. The orthodox clergy, especially of the Barelvis and the Deobandis, saw in this development a phenomenon of apostasy. How could anyone dare experience a divine vision after Prophet Muhammad had seen a series and, based on them, delivered the final message of God? Thereafter, there could only be khalifas or his representatives or imams. There cannot be another divine vision. Nevertheless, the followers of Ghulam Ahmad continued to consider themselves Muslim and pressed for the creation of the holy land or Pakistan as vociferously as any other member of the Muslim League.

Sir Muhammad Zafarullah Khan, an eminent lawyer, single-handedly drafted the League’s Pakistan resolution of March 23, 1940. In 1931-32, he had been President of the Muslim League, and from 1935 to 1941 he sat on the Viceroy’s Executive Council. When Partition happened, he was a judge of the Federal Court of India (the apex court in New Delhi). Sir Zafarullah was appointed the Foreign Minister of Pakistan. He also represented the country at the United Nations. This gentleman is only one example but any number of his sect identified themselves in the service of their new holy land. Yet, in 1952, virulent riots were ignited against the Ahmadiyyas and Sir Zafarullah’s house was set on fire at Lahore. He soon transferred himself out and joined the International Court of Justice at The Hague. In the wake of another agitation in 1977 when Zulfikar Ali Bhutto was the Prime Minister, the Ahmadiyyas were declared non-Muslims. Soon after, President Zia-ul-Haq had the Constitution amended to formalise the Bhutto declaration. This particular amendment read, non-Muslim means a person who is not a Muslim and includes a person belonging to the Christian, Hindu, Sikh, Buddhist or Parsi community, a person of the Qadiani group or the Lahori sect, or a Bahá'í, and a person belonging to any of the scheduled castes. After the Ahmadis were officially declared non-Muslim in 1947, a new campaign began to subject the Shias to similar prescriptions.

On August 11, 1947, Quaid-e-Azam MA Jinnah gave his presidential address to the Constituent Assembly of Pakistan. He observed: “You are free to go to your temples, you are free to go to your mosques or to any other places of worship. In this state of Pakistan, you may belong to any religion or caste or creed that has nothing to do with the business of the state. Now, I think we should keep that in front of us as our ideal and you will find that in course of time, Hindus would cease to be Hindus and Muslims would cease to be Muslims, not in the religious sense, because that is the personal faith of each individual, but in the political sense as citizens of the state.” The statement was an affirmation of what Jinnah had told a Reuters correspondent in 1946: The new state would be a modern democratic state with sovereignty resting in the people and the members of the new nation having equal right of citizenship regardless of their religion, caste or creed.

In this context, Farahnaz Ispahani observes: “This vision outlined by the founder remains unfulfilled. At the time of Partition in 1947, almost 23 per cent of Pakistan’s population, which then included Bangladesh, comprised non-Muslim citizens. The proportion of non-Muslims has since fallen to approximately three per cent in the western wing. Furthermore, the distinctions among Muslim denominations have become far more accentuated over the years. Groups such as the Shias, who account for over 20 per cent of the population, are often targeted by violent extremists. Ahmadis, barely one per cent of the population, have been declared non-Muslims by a writ of the state. Minorities such as Christians, Hindus and Sikhs have been the victims of bomb attacks on their neighbourhoods, some of them have been converted to Islam against their will. Houses of worship have been attacked and bombed while filled with worshippers. Pakistan has descended to its current state of religious intolerance through a series of political decisions by Jinnah’s successors.” (Purifying the Land of the Pure: Pakistan’s Religious Minorities by Farahnaz Ispahani, published by Harper Collins, India, 2015.)

The descent began in 1949 with the Constituent Assembly declaring the objective of Pakistan’s Constitution to be the creation of an Islamic state. It reached a nadir with the ‘Islamisation’ drive under General Zia during the 1980s.

At the time of Partition, Christians thought that the division of India had taken place on the basis that Muslims could not co-exist with Hindus. Moreover, Christians thought they were   (people of the book), and therefore, would not be harassed in Pakistan. Unfortunately, with the demise of Jinnah, the so-called tolerance for even Christians vanished. General Zia introduced Islamic laws which were openly against the minorities. The military rulers of Pakistan did nothing to control the violence of the fundamentalist outfits. Since then, Christians have been prosecuted and killed mainly on grounds of blasphemy. Salman Taseer, a Minister in the Sharif Government in Punjab was assassinated. His crime, according to fundamentalists, was that he asked for a fair trial of Christians charged with blasphemy.

Hindus and Sikhs were the first to be driven out of Pakistan during 1947-48. A very small proportion of them stayed behind. Their population, according to estimates, is about 14 lakh. A majority of them are based in Sind. Many among them are agricultural labourers. In the last 30 years, women from the community have often been kidnapped, forced to embrace Islam and married off to Muslims. When parents of these girls have tried to get the state through police and law courts to return their abducted children, the reply they have got is the women embraced Islam voluntarily and married Muslims of their own volition. The suffering of the  Shias should not be overlooked. The number of times they have been bombed while praying in their mosques is becoming difficult to keep track of. Extremists like the Wahabis have expressed a desire to expel the Shias from Islam; what was earlier done with the Ahmadiyyas. Serious intra-Islamic ‘cleansing’ efforts began at the time of Zia. The obvious target of brutalisation were the Shias. Sunnis were provoked to look upon the Shia community as ‘a worm in the Muslim apple of Pakistan’. The required poison was manufactured in madrasahs associated with the Deobandi and Ahle-Hadith traditions. As written by the distinguished Shia scholar Vali Nasr in his book, The Shia Revival: How Conflicts within Islam Will Shape the Future: “The Pakistan ulema began to share Saudi Arabia’s perception of the Iranian and Shia threat.” The extent of the establishment hatred is such as that a Sunni Muslim terrorist group called Sipah-e-Sahaba Pakistan targets and kills only Shias and is alleged to enjoy the covert patronage of the state. Whither minorities?