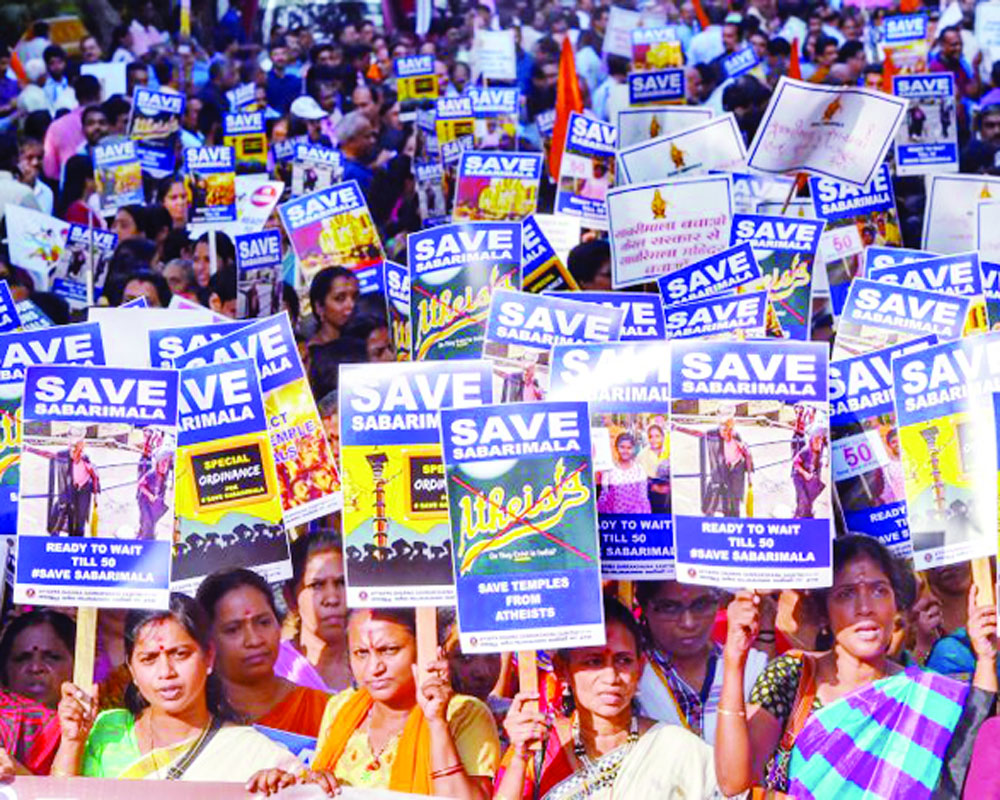 Rather than scrutinising Ayyappa Swami’s rites of pilgrimage, the Supreme Court may better serve the public interest in trying to recover the degraded ecology of the Western Ghats on which the shrine rests

Concerted attempts by mischievous non-believers to defile the Sabarimala precincts and undermine its hallowed traditions highlight the urgent necessity to recover Hindu temples from Government control and uphold dharma as understood and practised by believers. With each passing day, it is becoming obvious that the majority decision of the Supreme Court, while it has to be respected, does not do justice to the faithful. Justice can be done only by recognising the Ayyappa Swami panth as a religious denomination, or Section thereof, under Article 26 of the Constitution. The shrine can then manage its affairs in peace.

The State-run Travancore Devaswom Board has denied the Mala Araya tribe its traditional rights at Sabarimala, which were always respected by the Pandalam royals and Thazhamon Thantri family. These include the right to light the Makaravilakku (perform arti at a temple in Ponnambalamedu, not open to the public); bathe the deity with forest honey (abhishekam); and enjoy puja rights at sub-shrines, like the Karimala temple along the way.

Sabarimala’s major customs, including 41-day vrat and restriction (not ban) on women in a specific age group, derive from tribal culture and traditions. The Akhila Thiruvithamkoor Mala Araya Mahasabha plans to approach the apex court to protect its age-old customs under the Forest Rights Act. The community, which claims to have established the shrine before it came under the control of the Pandalam royal family, also plans to file a review petition against the verdict allowing women of all ages to enter the hill shrine after the State Government refused to do so.

The Communist regime’s eagerness to facilitate entry of women from the hitherto barred age group, even as review petitions are pending before the Supreme Court, was intended to humiliate the faithful. As genuine devotees gathered for the pilgrimage when the shrine opened on October 17, they encountered unseemly attempts by ineligible persons to gatecrash the temple. Mercifully, the temple closed without violation five days later.

In a major provocation on October 19, a team lead by a tearful inspector-general S Sreejith escorted Rehana Fatima (of Kiss of Love campaign fame), and Kavitha Jakkal, a reporter from Mojo TV, Hyderabad, to the shrine gates. They were forced to return after being recognised by devotees, despite wearing bulletproof jackets and helmets given by the police (a possible violation of the Police Act). Later, Mary Sweety also returned midway after being challenged by vigilant bhaktas.

Realising that the State Government may have bitten off more than it can chew, Devaswom Minister Kadakampally Surendran urged activists not to make the holy precincts a place to prove their strength and lambasted the police for escorting the women without verifying their credentials. Sabarimala is a huge revenue earner and the State could lose crores if Tantri Kandararu Rajeevaru, backed by Pandalam palace, closes the sanctum for purification if the temple is defiled. Just five decades ago, barely 5,000 pilgrims managed the arduous 61-km trek to the temple; now four crore come in the winter season alone as new roads have shortened the route.

An ideal solution would be to close the shrine for a decade and allow passions to cool down. Simultaneously, the degraded ecology of the Western Ghats could recover, especially after the recent floods, the worst Kerala has faced in decades. The 777 sq km Periyar Tiger Reserve, where the shrine is located, hosts 20 tigers, elephants, and other wildlife. Even after the floods receded, there were torrential rains in Sabarimala, and no one has taken stock of how the wildlife fared.

The National Tiger Conservation Authority is concerned that the rising numbers of devotees disturb the area’s fragile ecology. Virtually nothing has been done to implement the Sabarimala Master Plan of 2007. A review by the Kerala Government and Devaswom Board on October 9, 2018, found evidence of deforestation and major deviations from the plan. At Nilakkal base camp, trees were cut to make parking areas, while driver shelters, dormitories and hotels have been built, disregarding master plan specifications.

At the next stop along the sacred Pamba, several buildings have been constructed within 50-metre radius of the river, including a Government hospital. The green zone in front of the hospital has become a parking lot. The bio-toilets are inadequate; sewage treatment plant dysfunctional, and untreated faecal waste is being dumped into the river. The tree cover at Sannidhanam is less than 20 per cent, as opposed to 50 per cent recommended in the master plan.

A study by two expert teams has warned of landslips and tremors at the holy hillock due to extensive concrete flooring at the Sannidhanam, but the Devaswom Board is continuing construction works at Pamba and Sabarimala. While ordinary devotees merely desire clean and hygienic lodgings, a holy dip in a clean river, the Government and Board invariably start preparations at the eleventh hour and fail to serve the pilgrims.

Shops are auctioned at high rates at Pamba, Sannidhanam and along the route, and pilgrims are fleeced by traders even though many voluntary and religious bodies are willing to provide free food and beverages to devotees. Experts say pilgrims do not need multi-storey complexes, they need temporary shelters with proper sanitation and drinking water, which do not disturb the ecology of the sacred grove. The State Government is responsible for preserving wildlife and protecting rivers from environmental degradation under Article 48A of the Constitution. Under the Water Act 1974 (Section 24, 25), polluting river water is a punishable offence. But Pamba is being contaminated under the aegis of Government agencies, with impunity.

In 2005, thanks to the intervention of influential persons such as TKA Nair, principal secretary to the Prime Minister, the Ministry of Environment and Forests transferred 12.65 hectares of reserve land for Sabarimala’s Rs 1,000-crore development plan, which was approved by the Supreme Court. Environmentalists lament that the Devaswom Board has made Sabarimala a concrete jungle and commercial township. Less than 12 per cent of shrine land is used for public purposes; the rest comprises hotels, shops and guesthouses. The shrine stands in the low altitude evergreen stretch which is the Western Ghats’ biodiversity hotspot. Yet over 20 per cent of forest cover has disappeared in the past two decades. The Supreme Court should scrutinise this ecological desecration rather than Ayyappa Swami’s rites of pilgrimage.