The case against Article 370

The case against Article 370 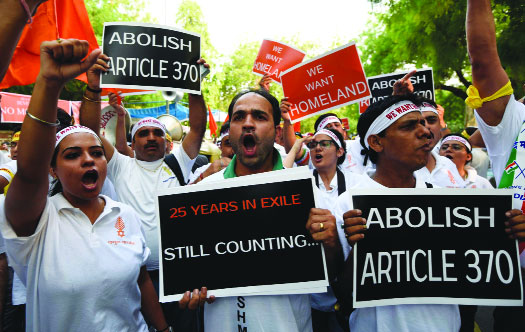 We must not allow this separatist demand. It’s time to end the ‘temporary’ nature of Article 370 through a Presidential notification abrogating it

Article 370 is a peculiar Article in the Indian Constitution. Its peculiarity doesn’t lie in the objective it seeks, powers it bestows or duties it casts. Its peculiarity is by virtue of being the only Article in the Indian Constitution which has the word “temporary” attached to it, making it the only Article incorporated for a limited time period. It states: “Temporary provisions with respect to the State of Jammu & Kashmir.” When the Constitution was being drafted, the chief architect of the Constitution, BR Ambedkar, was opposed to the said provision and refused to commit such treachery and stated: “You wish India should protect your borders, it should build roads in your area, it should supply you food grains, and Kashmir should get equal status as India. But the Government of India should have only limited powers and Indian people should have no rights in Kashmir. To give consent to this proposal would be a treacherous thing against the interests of India and I, as the Law Minister of India, will never do it.”

Due to pressure of the then Prime Minister, Jawaharlal Nehru, the framers of the Constitution had to incorporate it but did try to safeguard India’s interest by making it a “temporary” provision as it was never envisaged that a territory of India will be partly governed by laws of the country and not wholly governed by it. Post-independence, through tireless labour and valour, the Republic of India integrated more than 500 Princely States under the leadership of Sardar Vallabhbhai  Patel to form a union. An Instrument of Accession was signed by all Princely States, which stated that they form an undisputed and integral part of the Indian territory and governance. The very same Instrument of Accession was signed by Maharaja Hari Singh of Kashmir on October 26, 1947. No Princely State had been given individual powers or a separate Constitution like Jammu & Kashmir has at present.

Because of the allowance by Article 370, the State of Jammu & Kashmir has its own Constitution, which doesn’t render full protection of fundamental rights, and has no mention of minority, which is a fraud on the Indian citizens of Kashmir. There is a lot of discrimination on the basis of gender in property rights, where the women are deprived of an equal right to property. Besides, if a woman marries a non-Kashmiri resident, she is deprived of any entitlement to any property in Kashmir. Many more of such disastrously demeaning laws could be cited as examples of undermining the rights of Indians by Kashmir’s Constitution.

On December 4, 1964,  Congress Home Minister, GL Nanda, stated that Article 370 is a “tunnel in the power”. It was presupposed that the Centre’s power would slowly increase till Jammu & Kashmir became like any other State where the Centre had powers as per the Constitution. As opposed to that era, it is now unfortunate to see that driven by mere reasons of vote-bank politics, the Congress has taken a stand against the integrity of India.

The dominion of Article 370 with regard to the Indian Constitution is undisputed and has been reasserted by the Indian nation-state time and again — such that on November 21, 1964, the Head of the State, elected by the State Legislature, was replaced by a Governor, nominated by the Centre. Article 356 was applied despite the State’s Constitution already having provisions of the Governor’s rule. Again on November 24, 1966, the Governor replaced the Sardar-i-Riyasat after the amendment of the State’s Constitution, which was in violation of Section 147 of the same despite it being immune to amendments. This appointment was also upheld by the Supreme Court in Mohd Maqbool Damnoo vs State of Jammu and Kashmir. And then there were the years of 1990-1996, when mere executive orders enabled Presidential Rule to be imposed in Kashmir during the Congress regime.

There is also an argument that states that if Article 370 is repealed then Jammu & Kashmir will also cease to be a part of India, which is a baseless contention raised to misinform and create confusion. Article 1 of the Indian Constitution, which defines the territory of the country; and Article 3 of Jammu & Kashmir Constitution, which states Kashmir’s accession to India, iterates the fact that there is no debate regarding Kashmir’s alliance. The Constituent Assembly of Jammu & Kashmir was dissolved after the framing of the State’s Constitution. Post dissolution, an argument was made that now no modification or extension of Centre’s powers was possible. This was totally rejected by the Supreme Court in Sampat Prakash v. State of Jammu and Kashmir, wherein it upheld the Centre’s power to make orders despite the fact that the State’s Constituent Assembly ceased to exist.

The court laid down: “We must give the widest effect to the meaning of the word ‘modification’ used in Article 370(1).” This goes on to exhibit the overwhelming and unfettered power the Centre enjoys in the governance of the State of Kashmir. As a nation, we cannot allow this separatist demand and let this provision persist. It is time to pursue the intent of the Constitution and give finality to the temporary nature of this provision, which can be done by straight forward Presidential Notification under Sub Clause 3 of Article 370. The past application of the Presidential Rule for six years, the decisions of the Supreme Court, current non-operation of the Constituent Assembly and the temporary nature of this law permit a Presidential Notification to abolish Article 370. There’s never a wrong time to do the right thing. Now is the right time to abolish Article 370.

(The writer is advocate in Supreme Court of India)