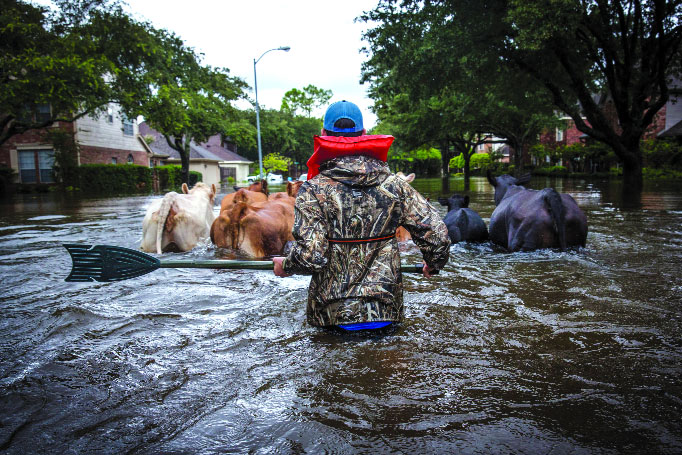 As many as 1.76 crore poultry, 46,000 cows and 20,000 goats were washed away in the recent floods in Kerala. The Home Ministry data shows the flood has ravaged a whopping 5.54 lakh acre (2,24,374 hectare) of agricultural land in Kerala, Karnataka, Assam, West Bengal and Uttar Pradesh. The Home Ministry data has not included the crops affected in Uttarakhand, Madhya Pradesh, Rajasthan, Bihar and several North-eastern States due to flood.

According to data, hundreds of farms and cattle sheds were destroyed and the livelihood of thousands of dairy farmers were destroyed. Kerala lost 57,024.31 hectare of crops in Kannur, Kollam, Kasaragod, Alappuzha, Thrissur, Kozhikode, Palakad, Malappuram, Pathanamthitta, Ernakulam, Kottayam, Idukki, Thiruvananthapuram and Wayanad districts.

Besides affecting cash crops such as pepper, coffee, the devastating floods washed away vegetables, medicinal plants and horticulture crops and hundreds of acres of paddy in the State. The deluge in Kerala has had a cascading effect on the cage fish farming and commercially valuable fish such as Pearl Spot, Sea Bass and Red Snapperwere.

Officials of the Kerala Agriculture Department said the department was able to rescue at least 50,000 cattle and house them in relief shelters across eight districts. “These cattle had been left behind by their fleeing owners when the water levels rose. There is also widespread fear about a breakout of communicable cattle diseases. There is a huge scarcity of roughage, including straw and green fodder,” said officials. Kerala has an estimated six lakh milch cattle requiring nearly 600 tonnes of feed, but produces just 30 per cent locally.

After Kerala, it is Uttar Pradesh which lost more crops during flood. As per the Ministry’s data, 50,873 hectare of crops in 23 districts, including Faizabad, Farrukhabad, Bijnor, Kanpur Dehat, Kanpur Nagar, Gonda, Barabanki, Behraich, Lakhimpur Kheri, Sitapur, Pilibhit, Mau, Kushinagar, Basti, Azamgarh, Badaun, Ballia, Balrampur and Moradabad, have been damaged. As many as 3,000 animals are affected here.

“In Odisha, 35,102 hectare of crops has destroyed in the floods. More details are awaited,” said officials.

As per the Home Ministry, over 1,400 people, which include 488 in flood-battered Kerala, have lost their lives due to rain, floods and landslides in 10 States across the country so far this monsoon season. As many as 254 people have died in Uttar Pradesh, 210 in West Bengal, 170 in Karnataka, 139 in Maharashtra, 52 in Gujarat, 50 in Assam, 37 in Uttarakhand, 29 in Odisha and 11 in Nagaland.