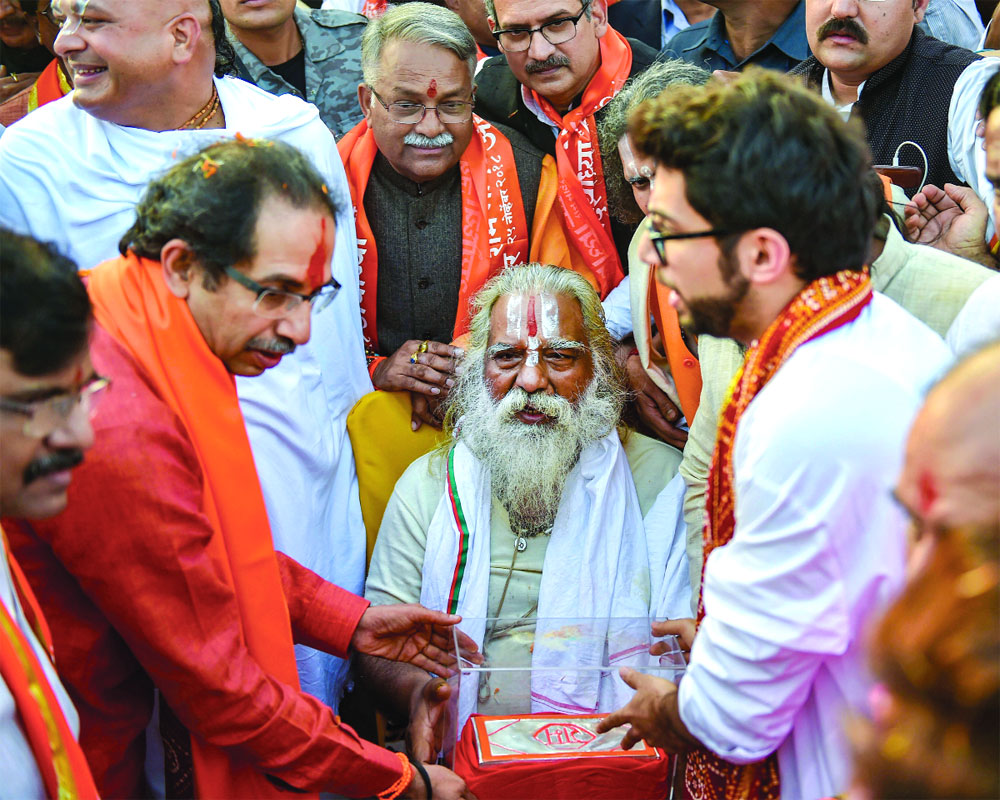 Making his first foray into the bastion of Hindutva identity politics — Ayodhya — BJP ally and Shiv Sena chief Uddhav Thackeray asked the Modi Government on Saturday to spell out the date when the Ram temple would be constructed.

Reaching Ayodhya for his two-day visit to the town ahead of a planned VHP’s Dharma Sabha on Sunday, the Sena chief said, “Days, months, years and generations have passed. Mandir wahin banayenge, par date nahin batayenge (You say you will make the temple there, but won’t tell the date),” he said.

“First spell out when you will construct the temple, the rest we will talk later. I have come to Ayodhya and will return only after learning about the date of temple construction. I have not come here for politics. The Government should either bring a Bill in Parliament or promulgate an Ordinance for the temple construction at Ayodhya,” Thackeray said daring the BJP-led NDA Government at the Centre, ahead of the 2019 Lok Sabha polls.

Questioning the delay in construction of the temple, the Sena chief said, “The BJP has a majority Government in Delhi and hence this inordinate delay in temple construction is beyond comprehension. Honouring the promise is real Hindutva,” said Thackeray, who is slated to visit the Ram Janmabhoomi temple at the disputed site at Ayodhya on Sunday.

Soon after landing at Ayodhya airport by a special flight on Saturday, Thackeray took part in rituals on Saryu river banks and performed Saryu pujan and Saryu arti with wife Rashmi and son Aditya.

The Sena chief was scheduled to address a meeting of Shiv Sainiks at Saryu banks but permission was denied by Ayodhya district administration. Thackeray has brought a pot of soil from Shivaji’s bastion Shivneri Fort in Pune, which will be handed over to the priest at Ram Janmabhoomi. His visit comes amid a clamour among Hindu outfits to bring an Ordinance to build the Ram temple at the disputed site at Ayodhya. Shiv Sena leaders Sanjay Raut, Eknath Shinde and Rajan Vichare and Mumbai Mayor Vishwanath Mahadeshwar have been camping in Ayodhya for the last few days to prepare for Thackeray’s programmes.

“All Sena shakhas across Maharashtra and party units across the country have been asked to perform arti at the same time,” a Sena leader said.

Earlier this week, Thackeray had said his trip to Ayodhya was to ‘remind’ the BJP of its poll promise. “Many are questioning why we (Shiv Sena) are remembering Ram now as the elections are nearing. Why should I hide it? I have taken up the issue because of the elections only. I am going to Ayodhya to remind the BJP about its promise,” he said.

The Sena chief belted out a new slogan: “Har Hindu ki yahi pukar, pehle mandir phir sarkar” (This is every Hindu’s call — first comes the temple and then Government).

On Friday, Shiv Sena MP Arvind Sawant said his party was pushing for the construction of a Ram temple in Ayodhya as it was promised by the BJP ahead of elections. “We have promised to the people of the country that once we come to power Ram temple will be constructed at Ayodhya. We are forgetting that promise. Therefore, Uddhavji has taken this initiative,” he said.