Imprints of shadows and water

Imprints of shadows and water 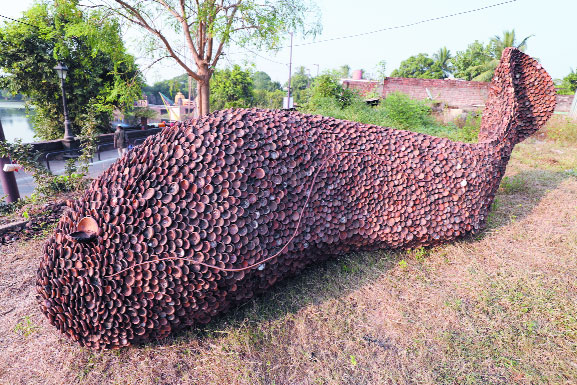 The Bhubaneshwar Art Trail creates an engaging dialogue between representation and abstraction through the works of Markus Baenziger and Cécile Beau. By Uma Nair

At the Bhubaneshwar Art Trail, curated by the brilliant Jagannath Panda and the enigmatic Premjish Achari, we have a French and an American artist presenting a unique and engaging dialogue between representation and abstraction. Both artists create works that draw our gaze inward as their installations speak of elegance and enigma even as they create a new signature in the dialectics of the environment and the large theories that are ingrained in us.

Tucked away on the terrace of an abandoned temple in Bhubaneswar with the sound of ducks quacking, the sculptural installation looks as if it’s an extension of an old tree. Brooklyn artist Markus Baenziger’s green leaves created by fabric and wire is a veritable treat and it speaks to us about the power of minimalism and the elegance of creating a work that can speak of itself even as it echoes an ecological evanescence amidst its own grace-filled gravitas.

Baenziger’s sculptures in the past have integrated his love of nature with his immersion in a gritty, imperfect and industrialised world. His installation at a tangential angle makes us gaze at the light that distills itself. “This installation is inspired by the simple beauty found in nature. A play of shadows, cast on the ground by the sunlight, is traced and materialised into a sculpture. It is a universal image that translates across geographic and cultural boundaries. As a new visitor to this culture, I present it as a shared experience and reflection on a shared environment. I am drawn to its ephemeral quality,” says the artist.

Approaching the work from a distance, one realises that these naturally rendered forms are actually made of a simple fabric that is thin and lets the light in, perhaps in a veiled fashion. The work calls attention to the continuum between decay and new growth, neglect and care, even as it dwells on the power and language of craftsmanship. Baenziger is a veritable master both in design and attention to detail. He has the capacity and experience to produce works that appear both familiar and emblematic of larger forces of nature both man-made and otherwise.

Dulcet-voiced, he explains to us, “It is an image that plays out countless times. Hidden from our attention, these moments are everywhere in nature. They persist against our intrusions into the delicate balance of the natural environment and often manifest themselves in the most unexpected places. Oversized and fabricated in metal, these traces of shadows intend to draw the eyes further and to experience the delicate beauty found in nature. I believe this is a shared experience, just as we are inevitably tied to a shared environment.”

On a raised mound opposite the Bindusagar sat  French artist Cécile Beau’s fish with scales. From a distance it looked like bronze, but on closer proximity it was evident that it was made from hundreds of tiny terracotta diyas. Cecile has been primarily interested in the notion of territory or landscape as mental appropriation of a place, as a tool to reach somewhere beyond the visible. Landscapes from which all human presence has disappeared or where it has perhaps never existed make these works austere.

“In different cultures, at different points on the earth’s surface, we have often given the role of ‘vehicles’ to animals living on the border between two worlds; air and earth for birds, the earth and the underworld for snakes, land and water for amphibians,” reasons Cecil. “This is apparently not the case for fish. Nevertheless, it is said that it’s one of the first forms of life, from which a branch  emerged to colonise the mainland.”

While each tiny terracotta diya offered so many stories, there were also sensory experiences that spoke of  multiple universes, both realistic as well as imaginary. But it’s a combination of poetic, fictional, mythic and zoological place in the environment that added to the magic and caprice of this installation. In the past in her travels and works around the world, Cecil has used vegetable/ mineral materials and given mysterious titles borrowed from foreign languages to add to the richness of her narratives. At once the fish (matsya) becomes both hybrid and enigmatic as it generates a seraphic atmosphere.

“It is also named matsya, when manifested as an avatar or incarnation in Hindu mythology,” explains Cecil. “Here, this fish with diya or lamps as scales comes out of the water. It is disseminating sounds that evoke the stars of our solar system. Between earth and cosmos, the matsya waves towards the water, the temple and illuminates with his eyes — slightly and literally, the darkness when night comes.”

As artists of deeper depths and sensibilities, both Cécile Beau and Markus Beanziger propose an aesthetic between life and art, between the environment and composite objects to generate conversation. Their creativity straddles different worlds but presents us with the truth that installations must weave local dimensions in time with a mapping of materials that power the dynamics of the past and the present.

The Bhubaneshwar Art Trail was inaugurated by Odisha Chief Minister Naveen  Patnaik on November 18 and runs for the entire month.