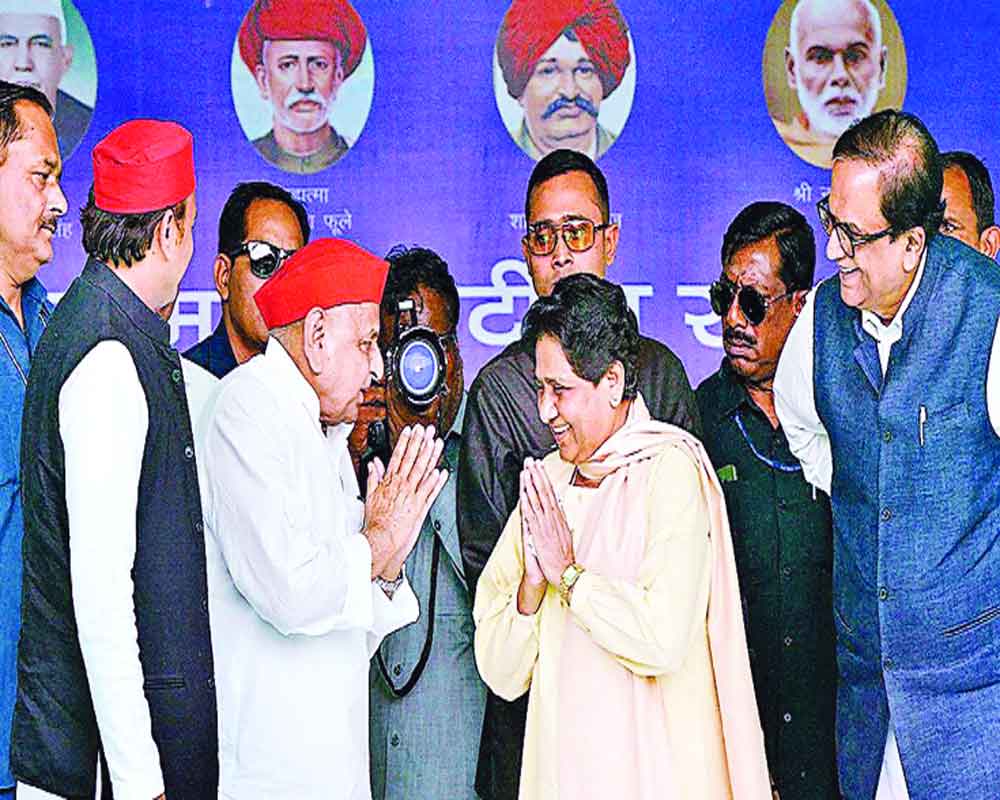 The SP and BSP chiefs shared a dais in Mainpuri making for a historic moment but can they stall national parties?

One may call it opportunistic but when is politics anything but? One may have doubted the possibilities of the mahagathbandhan but this is one alliance in Uttar Pradesh (UP) that has subsumed the hostilities, rivalries and egos of its partners to wage a counter dharm yudh, that of the oppressed, the backwards and Dalits, against the ruling raj of the privileged Thakurs. Or their representative arrogance in the Bharatiya Janata Party (BJP). So it is that Samajwadi Party (SP) founder Mulayam Singh Yadav finally shared the stage with Bahujan Samaj Party (BSP) supremo Mayawati in his bastion of Mainpuri at a joint election rally to appeal to their loyal voters to cast their ballot en bloc, end the rule of the BJP at the Centre and secure their say in the 17th Lok Sabha. You could also call it a revival of a proven formula, whereby Mulayam Singh Yadav and BSP founder Kanshi Ram had held back the BJP’s temple surge almost 26 years ago. And the bypolls at Gorakhpur and Phulpur have also proved that vote transference to each other could work on the ground.

In fact, it was Mayawati’s idea to go to Yadav strongholds and seek the Dalit votes for the combine. She even went so far as to justify the SP-BSP pact by quoting the backdrop of mutual alienation that caused the collapse of the alliance government in the State and led to SP legislators attacking her in a guest house on June 2, 1995. She plucked the thorn out of the flesh once and for all, saying she had forgiven that episode simply because “hard decisions” needed to be taken in the interest of the people and the party’s movement, given the present situation. She couldn’t have been further from the truth. Without an MP and just a handful of MLAs in the Assembly, her prized Dalit-Muslim formula is in shreds, the minority vote being completely appropriated by the SP and to some extent the Congress. Even her Dalit votepie is drifting to other parties depending on their ability to negotiate on the community’s behalf. More so, the Dalit component itself is split between the achievers or the creamy layer and those that are languishing below every known index. Her past tie-up with BJP has only helped the bigger party appear as an umbrella deliverer than the BSP’s own inclusion attempts of all castes. So overlooking a past hurt by a known frenemy is a little price to pay if Mayawati wants to be relevant both nationally and at the State level. Hence, she certified Mulayam as the bonafide leader of the OBCs and attacked both the BJP and Congress. As for the SP, now being helmed by the younger  Akhilesh Yadav, it realises that with a resurgent Congress focussing more on the UP Assembly elections of 2022 than the national polls, it cannot sit easy on existing loyalties of the MY (Muslim-Yadav) factor. Particularly given Congress leader Priyanka Gandhi’s aggressive outreach to the Most Backward Classes (MBCs) and Dalits, too. It has to hold the State if it wants to negotiate nationally. And so it is imperative for both SP and BSP to make a difference through the 80 seats in UP. Nobody understands this better than Mulayam himself, who despite criticising the alliance earlier, made amends by publicly acknowledging Mayawati. He even expressed gratitude towards the BSP chief for supporting him in his political journey and asked his constituents to “respect her”, clearly an appeal to SP voters to unquestionably support the BSP wherever its candidates have been fielded in the Yadav strongholds, elections for which are due in the next phase. By coming out, he also settled the debate on which side he is on, his son Akhilesh and not his brother Shivpal. He even asked an SP leader, who had bent to touch his feet, to accord the same respect to Mayawati seated next to him. But the final masterstroke was his announcement that this would be his last electoral outing, thereby setting off a sympathy wave of sorts that could seal the SP-BSP votebank. Historic it was. But can they make history again?