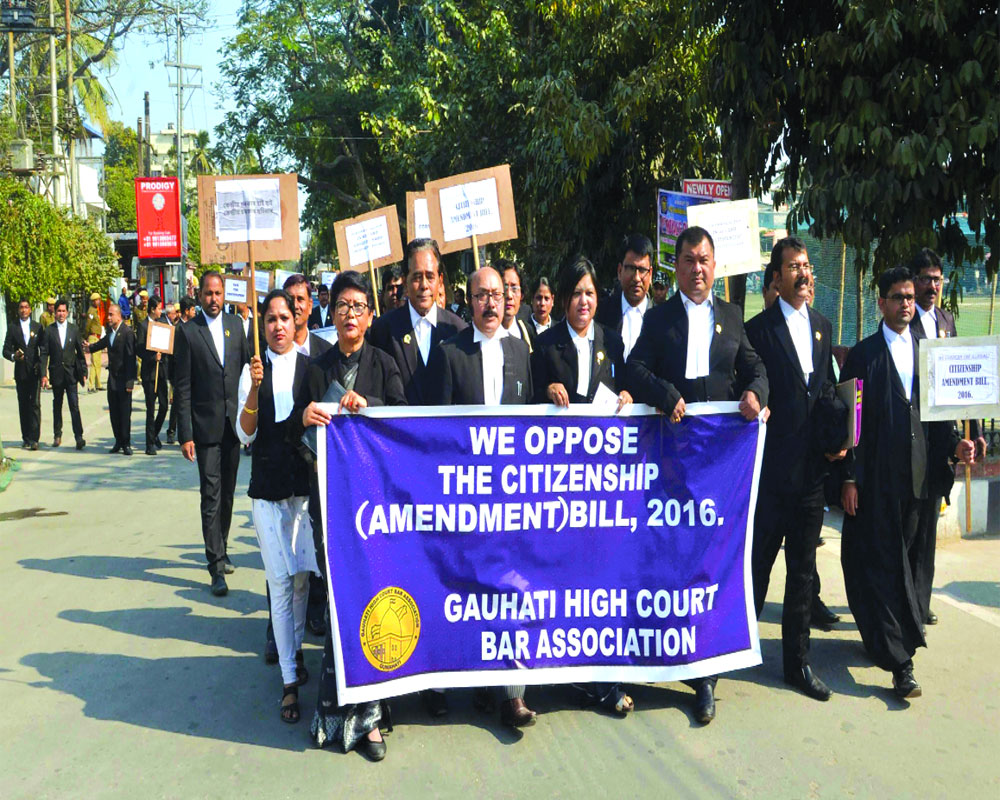 The influx of illegal immigrants from Bangladesh, after its independence from Pakistan in a 1971 war, spurred periodic public uprisings, ensuing in Assam Accord in 1985. If the new Bill fails to dispel fears among Assamese, it will reopen old wounds

The Lok Sabha passed the Citizenship (Amendment) Bill 2016 despite protest by the Opposition. Why this Bill has drawn so much controversy and opposition both from political parties and civil society groups within and outside North-East? The proposed Bill if passed in the Rajya Sabha will introduce an amendment in the original Citizenship Act of 1955. Once it becomes an act, it will make current illegal immigrants from Afghanistan, Pakistan and Bangladesh belonging to the Hindu, Buddhist, Sikh, Jain, Parsi and Christian communities eligible for Indian citizenship after six years of residency instead of 11 years as stipulated mentioned in the Citizenship Act of 1955. This was done by the NDA Government after considering a 400-page Joint Parliamentary Committee (JPC) report that thoroughly studied the concerns of the locals after touring the entire State of Assam. However, the Government clarified that it will ensure protection of Clause 6 of the Assam Accord which categorically demands the constitutional safeguards of the Assamese people. The JPC report states that the State and the Central Government should formulate rules and regulations under Clause 6A of the Assam Accord to ensure that the very ethnic identity of the indigenous people is not threatened at any cost. The Opposition, including the Congress, highlighted that the NDA Government is trying to dilute Clause 5 of the Assam Accord which sets the cut-off date as March 24, 1971 to detect and deport foreigners. In the new Bill, the Government proposed the cut-off date as December 31, 1971 which will not be applicable to Bengali Hindu foreigners only. Further, it also says that considering these communities as persecuted ones, they will all be eligible for citizenship whoever has entered India till December 2014. This has actually opened a hornets’ nest across Assam and the North-East region. That’s why the call for total revision and recall of the Bill was echoed with much unhappiness as of date.

When the times and events demand, political leadership, irrespective of their different ideological shades, must see to it that the indigenous people do not have to lose their identity in Assam. Today, what Assam has witnessed is exemplified in the writings of Myron Weiner (1983), who said: “Among the most precarious political systems in the world are those that seek to hold together a society containing at least two ethnic groups, one of which has a bare or near majority…Some form of power sharing is usually necessary or at least an arrangement under which one group wields political power, but provides some degree of economic security to others.”

But such arrangements are temporary as it is affected by demographic changes both due to immigration and emigration, further accentuated by gradual population growth among different groups of people. This has eventually disrupted the political system of Assam leading to large-scale political violence and public unrest.

Instead of demonstrating grandiloquence, the leadership of the State BJP-led Government Sarbananda Sonowal should have convinced and conveyed the disastrous impact of such a legislation way ahead both to the Central leadership of the party and the Government. Schooled at the centre of regional politics and student activism, especially in the historic six-year long Assam Movement, Sonowal should have been well aware about the ethnocentric sentiment of the locals.

Now, as the Asom Gana Parisad (AGP) has moved out of the coalition in Assam, it does not help the BJP espouse the cause of regionalism intertwined with its pan-nationalist image. At last voters in Assam will have no “right choice” left. The AGP, the regional flag-bearer of Assam, is indirectly making difficult the BJP’s task to reach out to the indigenous communities. The outgoing AGP Ministers in the Sonowal Government came out in public saying that they will not continue as Ministers at the cost of the interests of the indigenous people of the State. Indeed, what the AGP leaders have done rightly serves the party’s future. Else, the party would have seriously damaged its electoral prospects and relevance in State politics that is deeply enmeshed with ethnic, cultural and linguistic identity.

What the Speaker of the Assam Assembly, Hitendranath Goswami, said after the Lok Sabha passed the controversial Bill highlights the tension in the State, “As a citizen, my conscience cannot support any Act which is unacceptable to the indigenous people of Assam and detrimental to the unity and fraternity of the people of Assam.” He reiterated that views of the “people” should be respected. Meanwhile, former MLA and AICC Secretary Rana Goswami has lambasted the Speaker by stating that he has failed to take side of the public and not taking any concrete steps to express his opposition to the Citizenship (Amendment) Bill.

These events bring another pertinent question to the people: Will there be a danger for the survival of the North East Democratic Alliance (NEDA), a pet project of the BJP to muster support from like-minded political parties and groups to annihilate the Congress in the North-East? It seems, the NEDA will have to rethink its strategy to keep its continued alliance with the BJP. It is very clear that the regional parties across the North-East will really find it difficult to support the Citizenship (Amendment) Bill, though it directly affects Assam only.

At a time, when the AGP has withdrawn support to the Sonowal Government, the National People’s Party (NPP) Government, another constituent of the NEDA, led by Conrad Sangma in Meghalaya, has voiced his discontent over the Citizenship Bill. Even the NPP was the first party to raise the banner of protest against the Bill last year by passing a Cabinet decision. Sangma said it was one of the most aggressive manners in which their decision was conveyed to the Centre. What is shocking is that the lone BJP MLA in the Sangma Government, AL Hek, has stood united in its opposition to the Citizenship Bill. Equally concerned, he stated that he remains committed to protecting the interest of the indigenous people of the region. Apart from Meghalaya and Assam, rest of the States of the North-East such as Mizoram, Manipur, Nagaland, Arunachal Pradesh and Tripura too are affected by Bangladeshi migrants over the years. Politically, this move by the Centre to bring an amendment to the Citizenship Bill might be a smart move so as to create a “new vote bank” around the persecuted minorities, particularly the “Hindu Bengalis” coming from Bangladesh.

But, it does not augur well for North-East. Assam has been peaceful for over a decade, at least from terrorist-infested violence. But this Bill has once again given opportunity to numerous organisations such as the All Assam Students Union (AASU) and North East Students Organisation (NESO) to mobilise people. Though Union Home Minister Rajnath Singh is repeatedly assuring the country that Assam will not have to take the sole burden of the migrants, it is difficult to stop the inflow as once migrants settle at one place, it becomes next to impossible to move them out to other places.

One may recall that the people of the North-East, particularly the Assamese, are chauvinistic, parochial or xenophobic. The incessant influx of migrants from then East Pakistan, and now Bangladesh, since India’s Independence has seriously altered the demographic profile of all the North-East States. This has largely affected the population pattern of Assam. What Weiner echoed in the hey days of the Assam Movement in 1983 still holds true for the locals: “Large scale migration of illegal migrants from Bangladesh into the North-Eastern Indian State of Assam has disrupted a fragile political framework. The Assamese middle classes feared the loss of political control when the Central Government ordered elections after there was a marked increase in the number of migrants on the electoral rolls, while Assamese and tribal cultivators reacted against land encroachments.”

This had led to the birth of the Assam Movement which raised an alarm against the Bangladeshi migrants across the State. This was a defining moment for the Assamese people as the leadership of the movement called for an all-out protest to expel the foreigners from Assam. More significant aspect was that it was considered as one of the largest student-led Movement of the world. And this evoked much interest and attention from all quarters starting from the Central Government, media, and public. Indeed, this was one of the factors that had changed Assam’s perspective on Centre-State relations in subsequent years. Academic dialogues and deliberations that shaped various narratives in the post-Assam Movement years marked the emergence of such concepts like stepmotherly treatment, centre-periphery and India acting against itself in regard to the State. For late Indira Gandhi-led Government at the Centre, the Assam Movement was simply a “deterioration of law and order problem”, but for Assamese people, it was a question of life and death. Assam saw violence for years. After the assassination of Indira, when Rajiv Gandhi took over, he signed the historic Assam Accord with the AASU leadership on August 15, 1985, which has the very sensitive clauses 5 and 6. And this Clause 6 has envisaged that appropriate constitutional, legislative and administrative safeguards shall be provided to protect, preserve and promote the cultural, social and linguistic identity and heritage of the Assamese people.

This Citizenship Bill has created chaos across Assam and North-East. Let’s wait and watch how the NDA Governments, particularly the Sonowal Government, pull through this crisis. It’s a testing time for both these Governments and for the indigenous peoples of Assam.

(The writer is an expert on international affairs, and an independent researcher on contemporary issues)