New trade war in the East

New trade war in the East 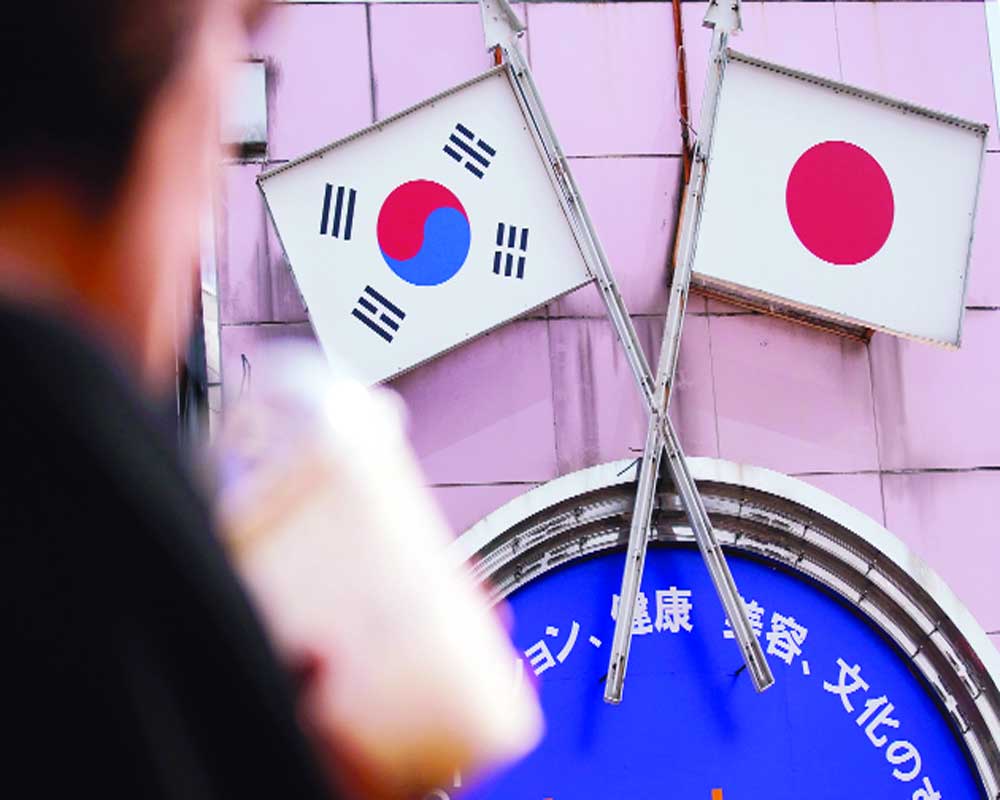 With the South Korea-Japan spat escalating, it is unlikely that the US can play a mediatory role. The fallout of such dispute will affect the world economy

At a time when both Japan and South Korea are expected to cooperate in addressing multiple economic and strategic challenges in the East Asian region, they are embroiled in a serious trade dispute, which threatens to escalate and even spill into other areas like security and regional supply chain.

That the bilateral relations between the two have long been plagued by historical and territorial issues is well-known. But this time around, it is not the usual historical wrangle but a more serious and substantive trade dispute that poses a challenge to their ties. The current issue, which has created a serious diplomatic row between the two, relates to the action taken by Japan to put restrictions on its supply of semiconductor manufacturing materials to South Korea.

On July 4, Japan started implementing a new policy of restricting its supply of three critical materials involved in the manufacture of semiconductors — photoresist, etching gas and fluorinated polyimides — to South Korea. Restrictions on more such sensitive materials are expected to follow once the policy gets into full swing. Under this policy, Japanese companies supplying these materials to South Korea will have to seek the Government’s approval for each contract — a cumbersome process that would take at least 90 days for clearance.

For a long time, South Korea has enjoyed a preferential treatment in the supply of these sensitive materials, which contributed to Korean companies like the Samsung Electronics and SK Hynix among others, to emerge as giants in the semiconductor field. Today, they make nearly two-thirds of the world’s memory chips, which are used in a wide range of products from smart phones to cars. If these companies go out of their stockpiles, it will cause serious disruption to the global semiconductor production.

On August 2, the Japanese Government followed up on its earlier action by removing South Korea from the “white list” of 27 countries, which enjoyed preferential treatment in the supply of sensitive materials from Japan. South Korea is the only Asian country which joined the list in 2004. The latest action of the Japanese Government will come into force by August 28 and is regarded as a serious threat to the Korean companies.

Expectedly, this has provoked sharp reaction from Seoul, which considers the Japanese action as politically motivated. Many in South Korea perceive it as a retaliation to the recent Korean court ruling, asking Japanese companies like Mitsubishi Heavy Industries, Nippon Steel and Sumitomo to pay compensation to Korean workers, who were not paid for their labour during the Japanese colonial period.

Japan strongly protested the court’s ruling  on the ground that this would undermine the very basis of the post-war bilateral relations. The Japanese Government further clarified that both countries had already settled all war-time labour disputes under the 1965 — $500 million was paid to South Korea in aid and loans at the time — Japan-South Korea normalisation treaty. Japanese leaders fear that the court’s verdict could open the floodgates of never-ending claims for compensation from different quarters.

But inside South Korea, the court’s verdict enjoys considerable support, particularly among the younger generation. There are even voices that doubt the legitimacy of the 1965 Treaty itself, which they claim was signed by a military dictator, Park Chung-hee.

The issue has already created a complex diplomatic row between the two countries. Basically, Japan has clarified that its measures to curb the export of the three materials are closely connected with regional security concerns as it doubts the effectiveness of the monitoring mechanisms of South Korea. It alleged that some of the sensitive technologies have reached North Korea, thereby raising serious security concerns.

But the same has been denied by the South Korean Government, which has given evidence to prove how Seoul has tightened its vigilance against any illegal diversion of these sensitive materials to North Korea. South Korean President Moon Jae-in has himself taken the position that Tokyo’s restrictive measures run “counter to the history of the development of bilateral ties” and called for their immediate halt.

Warning that these measures would be counterproductive as they would ultimately “cause great damage to the Japanese economy itself”, apart from “destroying the framework of South Korea-Japan economic cooperation accumulated over half a century”, he also complained that Japan’s action would “cripple the global supply chain and wreak havoc on the global economy.”

Anti-Japanese sentiments have quickly picked momentum in South Korea, resulting in the boycott of Japanese products, temporary closure of many Japanese business establishments, decline in the number of Korean tourists to Japan and cancellation of  many private air services

Undoubtedly, bilateral relations have now sunk to the lowest level since 1965 and to stem further decline, it is necessary for a friendly outside power like the US to intervene and mediate. One would like to recall the mediatory role played by the then President Barack Obama in 2014 at The Hague, in a bid to reduce tensions between the two countries. But current US President Donald Trump is different from Obama and he does not inspire the same degree of trust and confidence as his predecessor did.

Nevertheless, US Secretary of State Mike Pompeo met the Foreign Ministers of Japan and South Korea together in a bid to reduce bilateral tensions and to urge them to accept a “standstill agreement” to gain time to find a “pathway for dialogue.”

Analysts doubt the ability of   Washington to play any mediatory role given Trump’s strong push for “America First”, his transactional approach to South Korea and Japan on security issues, his obsessive anti-China postures and unsuccessful bid to denuclearise North Korea.

With no prospects of any truce in the escalating trade friction, more Japanese exports regulations will come into force from August 28 and they could virtually restrict any product on national security grounds to South Korea.

Faced with such a grim situation, the South Korean Government seems to be in a mood to take counter-measures against Japan.

First, it may consider terminating a military intelligence sharing pact, which is coming up for renewal by the end of this month. But the US is very much interested in its renewal and it remains to be seen whether it can persuade Seoul to renew.

Second, Seoul is also thinking of removing Japan from its own “white list” of countries that receive preferential treatment on trade and will

proceed to file a formal complaint with the World Trade Organisation (WTO).

Third, Seoul has already informed Japan that it may not consider it as a “friendly” nation for ignoring along “history of cooperative relations.”

(The writer is a distinguished fellow at the Observer Research Foundation, New Delhi. Earlier, he was a professor of Japanese Studies, Jawaharlal Nehru University, New Delhi)