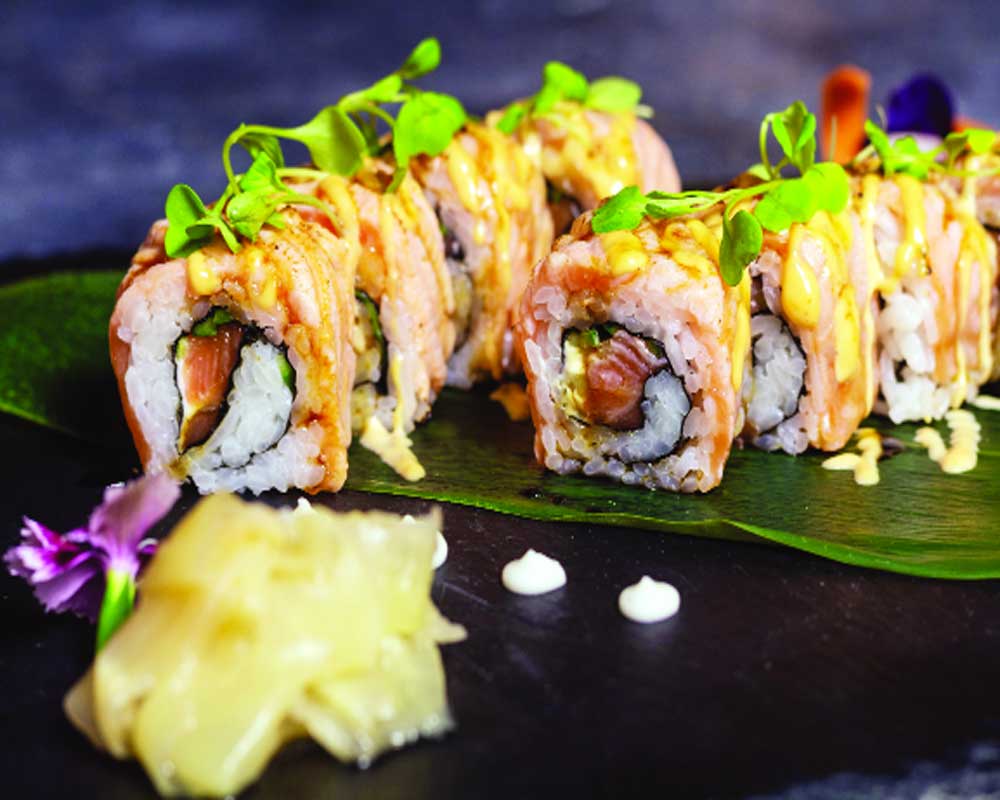 The clean yet delicious flavours of the small island country can be indulged in at Kampai. By Team Viva

Can you name a country where healthy eating meets culinary artistry? It’s Japan. Kampai, located in Aerocity, Worldmark 1 brought these culinary skills to the Indian table. An uphill alley leads you into a dimly lit, yet chic and contemporary restaurant. Looking around, it was difficult to contemplate that you’re sitting in an authentic Japanese eating place. However, small details such as the cherry blossoms false ceiling, decorated Japanese rack dolls and modern portraits from the country on walls gave the place a traditional touch. To experience the culture and traditions, there were private rooms with a sliding glass (Shoji) that suddenly transport you to Japan as if through teleporting. With Japanese style dining or Horigotatsu, the private rooms give you a cross-culture experience that ought to stay.

I was still mesmerised by the simplicity yet complexity of their culture when the first plate of food was served. From the summer specials, the seafood salad and the Edamame hummus with rice senbai was served. In terms of the presentation, the people of Japan have always seen their food as a work of art and their plate as an empty canvas. This was exactly the case with these two dishes. The seafood salad, was as colourful and complex as the plate looked and yet the taste was simple. Seaweed with fresh greens and sliced apples was all it had. The seaweed cleverly added the saltiness in the dish. The flavours were simple, clean but delicious. As for the Edamame hummus with rice senbai, the rice senbai was identical to a South Indian papadum however, when paired with the edamame hummus, this combination was a winner. The leafy, grassy flavour from the edamame and earthiness from the chickpeas and rice made the dish rich.

Next in was the Mushroom soup (Shiitake No Sumashi Shiru) and the MKM sushi. The mushroom soup filled the room with its tempting burnt garlic and butter smell. It was packed with the flavours derived from the mushroom, garlic and butter. Surprisingly, despite that, it was somehow really light on the stomach. The MKM sushi was rolled beautifully holding the red cheddar and tuna in the middle, finished with deep-fried panko breadcrumbs and topped with more of tuna. As they say, nothing could go wrong when things are deep-fried. With the comfort that deep-fried dishes give us, combined with the freshness of sushi, there has been no better creation than this.

Bringing the streets’ favourite to the table, we were served the Gyozas two ways. They were the Mushroom gyoza served with soy sauce and Duck gyoza with hoisin sauce. Flour dough, wrapped around mushroom and duck, first steamed off and then lightly pan-fried were the ultimate comfort food. It was served with the sweet hoisin sauce which added a bit of a glazy texture to it.

The next street favourites were the famous Chicken baos and tempura prawns. The Bao, traditionally a sweet bread sandwiched with thinly sliced cucumbers, fried tempura chicken, finished with a drizzle of some thousand island sauce, was undoubtedly breathtaking. The smack at the end of a chilli sauce elevated the whole dish to another level. The tempura prawns were deep fried, just simply classic and evergreen. For seafood lovers, this is a must.

With the Miso ramen, the main course was served. Miso broth, flooding the ramen, minced chicken and half a boiled egg was the ultimate culinary delight that one could ever have. The miso soup, high on the flavours of ginger, was soothing and made the dish super-addictive. It could leave one asking for more.

To end the beautiful Japanese journey on a sweet note, dessert was served. The cheesecake was drizzled with a strawberry sauce. Although it tasted like a basic cheesecake, the top was baked instead of being set. Finally, I got a chance to taste a chocolate tiramisu tea just like how the Japanese end their meal.

An afternoon spent in Kampai, living and experiencing life as simply the Japanese live it, is definitely an afternoon well-spent.