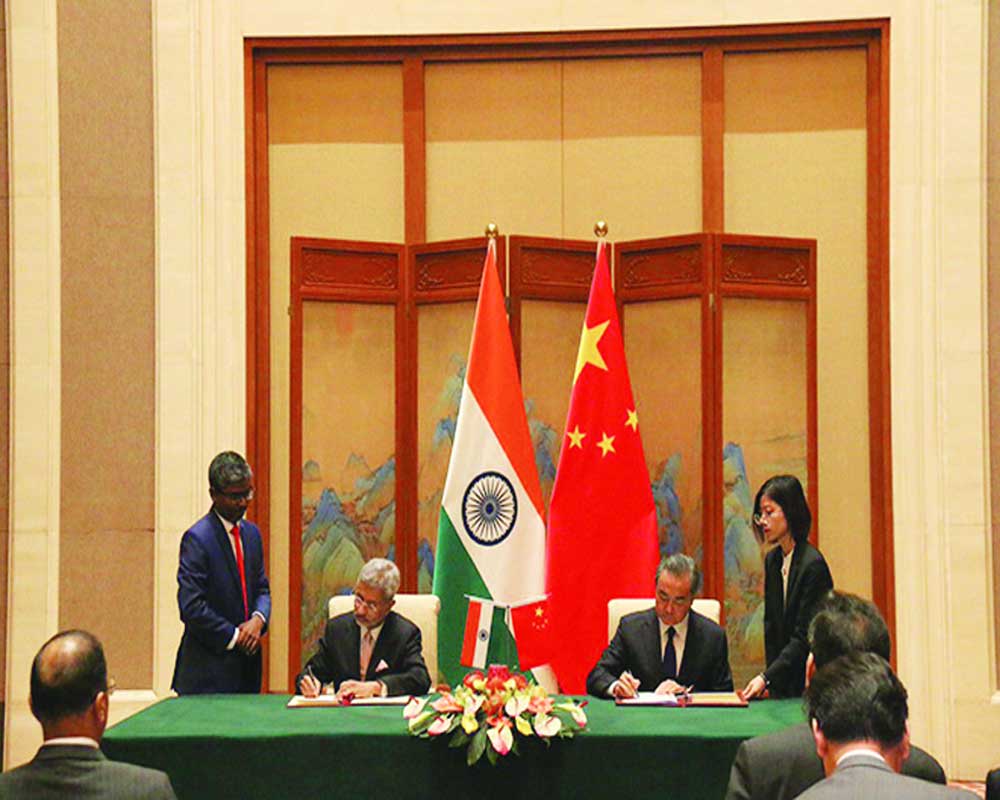 The time has come to provide new orientation to India-China relations. The two nations must come together and work towards the establishment of global peace and security

The outcome of External Affairs Minister S Jaishankar’s visit to China has been positive, not only in terms of India explaining its stand but also clearing the air for future exchanges. The External Affairs Minister is not only a distinguished diplomat but having been India’s Ambassador to China, he knows the system and personalities whom he has to deal with. One major point made by him to China’s Foreign Minister Wang Yi  was to emphasise that the future of the India-China relationship will depend on “mutual sensitivity” to each other’s “core concerns.” In return, Minister Wang Yi emphasised “the five principles of peaceful co-existence”, which have “fundamental interest and long-term interest of our two peoples and also contribute to world peace and human progress.” As an immediate measure, India and China signed four agreements covering cultural exchanges, healthcare, sports and cooperation in museum management. In particular, both Jaishankar and Yi emphasised the importance of cooperation in the field of traditional medicine, wherein both China and India, the two most ancient civilisations in the modern world, have cumulative knowledge.

The time has come now to provide a new orientation in China-India relations. In the economic field, bilateral trade between the two countries touched almost $90 billion in 2017-18 but trade deficit increased to $62.9 billion in China’s favour. China must follow Lao Tzu: “If you do not change direction, you may end up where you are heading.” It clearly has interests which are long term, given its ancient history and traditions and it is unlikely that it would think in terms of mere short-term benefits that could lead to friction and disputes. Our External Affairs Minister clearly mentioned that any bilateral differences should not become disputes.

China has major ambitions to emerge as the largest and most influential global power in the world. Its growth rate has been phenomenal and poverty, which was widely prevalent, has more or less been completely eliminated. This writer first visited China in 1981 and today, the country represents progress which most other nations have achieved in almost a century. Yet, China cannot ignore the fact that it shares a large border with India and the latter is a rising power in a complex world. There is every need for the two nations to come together and work towards the establishment of global peace and security.

One major area where the two countries must cooperate is in respect of promoting a pattern of sustainable development which deviates substantially from the Western model. Unfortunately, both nations have been following this model. China in particular has adopted it much too rapidly with major economic success but with some adverse consequences both at the global and national levels. Gandhiji was not in any way exaggerating when he predicted that for the civilised West “a time is coming when those who are in the mad rush today of multiplying their wants, will retrace their steps and say; what have we done…. Modern civilisation is such that one has only to be patient and it will be self-destroyed.” What we find across the entire world, which is mindlessly aping the Western model, is human-induced climate change resulting from the burning of fossil fuels, a loss of biodiversity and destruction of the earth’s ecosystems.

China and India are large countries, which are also suffering from the consequences of these disastrous trends. As the Intergovernmental Panel on Climate Change (IPCC) has projected and as is becoming increasingly evident today, the frequency and intensity of extreme events is rapidly on the increase. These take place in the form of heat waves, extreme precipitation events and several sea level related disasters. There are areas which are suffering from prolonged drought, which at the same time, witness floods during certain seasons.

China already has a major problem of water scarcity, particularly in its western region. India, too, is suffering from the consequences of global climate change, which clearly makes this a “core concern” for both societies. It is also important for the population of China and India to set a new path of development which is relevant not only for the two countries but also for the rest of the world. Together, China and India are close to three billion people in a world which holds today an estimated 7.7 billion. Clearly, therefore, whatever path is set by the two countries will have a major influence on the world as a whole.

An area in which cooperation is needed would be to develop and use renewable sources of energy. The IPCC has clearly assessed the reasons for the world to keep within the 1.5oC limit by the end of the century.  It has also defined the implications of land use, including massive consumption of meat, which is totally unsustainable. Today, China has increased its consumption of all forms of meat to a huge level. However, fortunately, it is one of the leaders in the use of renewable energy wherein both countries would derive mutual benefits from working together.

In Prime Minister Modi’s Independence Day speech, he emphasised the need for water conservation, including precision agriculture, rainwater harvesting and waste water treatment. He also highlighted the indiscriminate use of plastic. Additionally, he addressed the need for cutting down on the use of chemical fertilisers in agriculture by up to 25 per cent. He stated: “This would be a great service to the nation.  This would be a great step in saving our Mother Earth.”

China and India can work towards the use of bio-fertilisers, which would enable us to do away with chemical fertilisers.  “Saving our Mother Earth” is clearly a core concern for both societies. This writer has interacted with those responsible for conceptualising a facility called “Science City”, which is to be established outside Beijing over an area of 100 square kilometres.

The ambition behind this initiative is to see that China addresses global problems of a long-term nature. Perhaps India could also join hands with China, with delineation of principles governing intellectual property and clear areas of common endeavour to cooperate in “Science City” so that we work towards developing global solutions for a sustainable future.