Test of a United India

Test of a United India 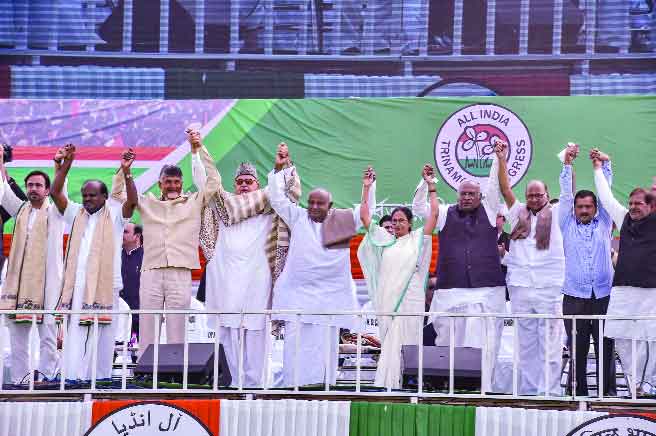 As the Lok Sabha election gets tantalisingly close, the season of mahagathbandhan or a grand alliance has started in right earnest. So has flexing of political muscles by what can loosely be called as the anti-Bharatiya Janata Party (anti-BJP) — a conglomeration of diverse regional parties, united by a single agenda of removing the Modi-Shah duo from national politics in the Lok Sabha election. Of course, BJP rebel and now architect of the “Save Democracy” movement Yashwant Sinha adroitly reminded everybody that the Modi versus Rest  narrative would only strengthen the former’s image and the Opposition needed to counter the BJP on ideological counts.

Raised hands and clenched fists of all leaders present in the Kolkata rally, organised by the Trinamool Congress (TMC), not only gave a perfect photo opportunity to Opposition leaders but somewhere down the line increased the frown lines of the defender — the BJP-led National Democratic Alliance (NDA). Many considered the rally largely as an exercise to project TMC chief and West Bengal Chief Minister Mamata Banerjee as a possible prime ministerial candidate of the grand Opposition alliance for the Lok Sabha poll even though the stated objective was to bring all anti-BJP parties on the same platform. But that’s just one aspect of the burgeoning index of Opposition unity.

Of course, all the 20-plus parties that participated in the Kolkata rally on January 19 had different agenda on their minds. Most of them were looking for a better outing in the Assembly polls with their respective alliances, where the BJP has become a force to reckon with since 2014. But given that the TMC hosted the first successful Opposition rally and managed to get on board almost all leaders and parties opposed to the BJP, it can now safely claim to be the leader of this Third Front. Banerjee also pitched herself as a sort of an arbitrator for possible disputes, whenever and wherever they arise, among this Front. Her diplomatic handling of the stage and giving importance to all the leaders present amply suggested her ease of managing diverse interests, her acceptability and showed her national ambitions.

But the fissures in such a loose formation are still too wide and its ability to pose as a united front before the election is still a matter of speculation. Telugu Desam Party (TDP) chief Chandrababu Naidu, who was present in the Kolkata rally, has practically abandoned the Congress with which he had sewed an alliance for the Assembly polls of Telangana.  Congress president Rahul Gandhi and Naidu had become the poster boys of this mahagathbandhan then, beaming as they were with hands raised in solidarity.

As an afterthought, the TDP supremo perhaps realised that he cannot give much space to the Congress to grow in his home state of Andhra Pradesh. An alliance with the Congress in the State would limit his chances to have a go at the chair of Prime Minister. He might have perhaps looked at the prospects of him somehow becoming a possible compromise candidate in the event of this Opposition grand alliance getting close to government formation.

Besides, Mamata Banerjee and Chandrababu Naidu, who are possibly looking at a national role for themselves, this anti-BJP Opposition front also has Dalit leader and Bahujan Samaj Party (BSP) chief Mayawati as the prime ministerial candidate. She has been endorsed strongly not only by her own party but also by her newly-found political partner and nephew Akhilesh Yadav of the Samajwadi Party (SP). The Bua-Bhatija alliance is the one which has set the tone and template for the general election and almost every political pundit now says that the road to New Delhi this time would go through the lanes and bylanes of Lucknow and Uttar Pradesh.

Days before the Kolkata rally of the Opposition, the SP-BSP alliance in Uttar Pradesh triggered a wave of anticipation among the anti-BJP front and threw open a wide range of political possibilities at the cost of the saffron party in the largest State of the country. The  TMC rally simply took the idea of unity ahead and sort of announced to the world that the neutral Third Front was alive and kicking  and both the BJP and the Congress should consider it as a possible contender for the throne in Delhi provided it gets the numbers leaders are hoping for. And if all parties do well individually, then the Congress can provide outside support if the situation so warrants.

Coming back to the SP-BSP alliance, even the Rashtriya Janata Dal (RJD) in Bihar, which has a vote base similar to the SP’s in Uttar Pradesh, is excited about  its prospects. This perhaps explains why Tejaswi Yadav, the de facto supremo of the party in the absence of the incarcerated Lalu Prasad Yadav, dashed to Lucknow to congratulate Mayawati on her birthday and tweeted pictures in which he touched her feet reverentially. It’s rare to see bonhomie between the parties representing the Dalits (BSP) and OBCs led by the Yadav community (SP and RJD), as they have not only been at political but also social loggerheads for decades.

Tejaswi knows for sure that keeping the BSP in good humour would only help consolidate and expand the vote base of the grand alliance in Bihar. Dalit leader and Lok Janshakti Party (LJP) chief Ram Vilas Paswan is firmly in the NDA fold, at least for the Lok Sabha election, and the RJD would be more than happy to get any incremental votes of Dalits in the State if Mayawati is on board even if the BSP does not contest a single seat as part of the grand alliance in Bihar. In fact, the RJD could go to the extent of offering a seat or two to the BSP even though the Mayawati-led party does not have any foothold in the neighbouring state.

In this season of anti-BJP posturing, photo ops and alliances ahead of the Lok Sabha poll, the only motive seems to be removal of Narendra Modi as the Prime Minister by working out sound electoral mathematics and ensuring a higher seat  turnout than the BJP did in the 2014 polls. The SP-BSP alliance is simply banking on the fact that if it gets a combined vote share, which is higher than the NDA’s in the state, it would be in the driver’s seat. Of course, chemistry and adjustment are equally important in alliances and it remains to be seen how firmly it is cemented at the grassroots  and booth levels.

Left out of the alliance in Uttar Pradesh — a move on expected lines — the Congress is neither happy nor unhappy at this moment, contemplating the different possibilities along with permutations and combinations ahead. Optimists in the party believe that at the end of the day, the SP-BSP alliance could be a part of the UPA if the numbers so demand and they are at a striking distance of forming the next government. Of course, Mayawati would throw her hat in the ring for a possible go at the chair of Prime Minister if the situation so warrants and the mahagathbandhan gets a respectable number of seats. This situation would be conditional on the Congress not doing well and remaining well below 100 seats, regional parties dominating the results and the BSP itself performing well and getting a reasonable number of the 38 seats it would be contesting out of the 80 in Uttar Pradesh.

But there is many a slip between the cup and the lip. Post-verdict electoral understandings, support and alliances could be quite different from the ones cemented pre-poll. In a possible scenario where the NDA is a little short of majority, the BSP could always spring a surprise. It has a history of aligning with both SP and BJP, and there has been no shift in BSP’s ideology even as it goes to polls this time around as a formidable force in alliance with the SP in Uttar Pradesh.

Similarly, the TDP, too, could go anywhere — from the NDA to the UPA, or to Third Front — in the post-poll political calculations. In the last six months, we have seen the party travelling all platforms. So there we are. It all depends on numbers after the polling and till then, all political parties would  be posturing and keeping their options open. Much water will flow till then.