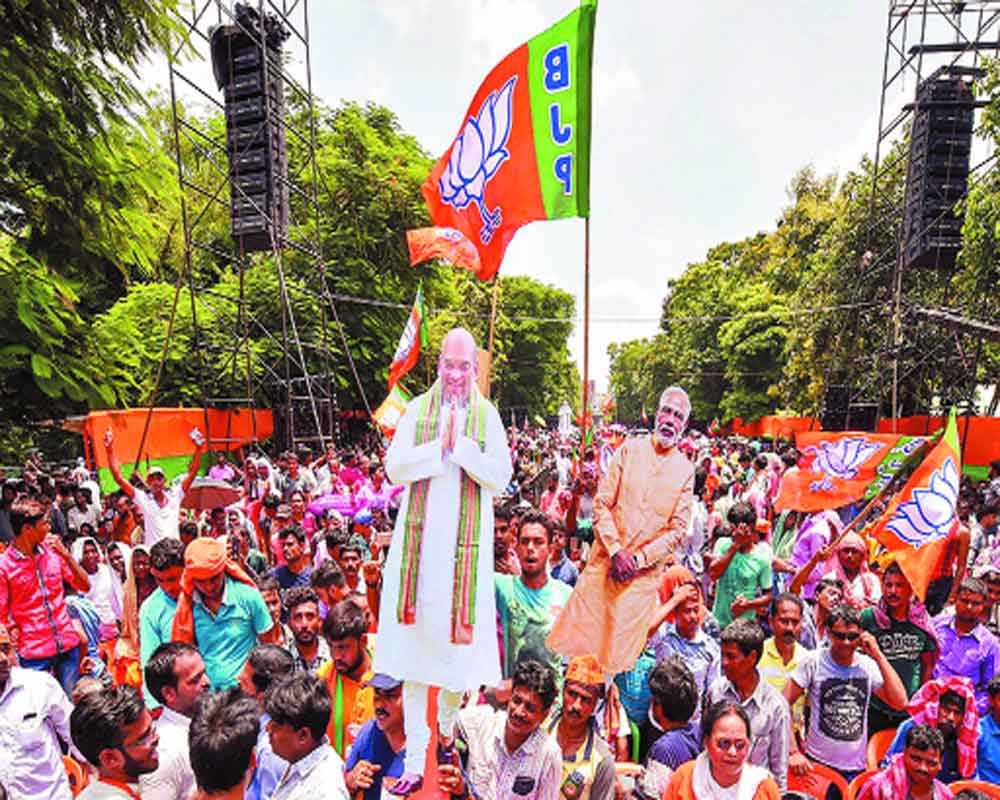 Though general elections are a few months away, the BJP and the Congress are simply attacking each other. Will they pull out a rabbit from their hats and bring a fresh narrative?

After Priyanka Gandhi Vadra’s entry into active politics, our grand old party, the Congress, looks energised, motivated and has the momentum on its side to face the 2019 Lok Sabha election. Of course, it has been helped in no small measure by the Bharatiya Janata Party (BJP), which now looks jaded, carries the disadvantage of anti-incumbency and is seemingly devoid of the same energy and enthusiasm that marked the party’s campaign throughout 2013 till the 2014 general election. Despite being on a roll — to an extent as Congress supporters would like to believe — after last year’s victories in the Assembly elections to Madhya Pradesh, Rajasthan and Chhattisgarh, this would be the first battle in recent years where the grand old party, which by default is the main challenger to the BJP, is yet to come out with a positive poll narrative or sound implementable promises. It needs a pitch, now.

Rather than projecting any positive agenda for the creation of jobs, to boost the country’s economy or putting forth any dynamic agenda which it might have for foreign policy vis-à-vis our neighbouring countries, all it is dependent this time around is on the “failure” of the Modi regime to fulfill promises it made in 2014. As of now, Rafale seems to be the single most important agenda for the Opposition, even as the ruling party is spiritedly defending itself and has been denying any wrong doing. Attack, attack and attack…seems to be the Congress’ mantra as it enters the last phase before the elections are formally announced by the Election Commission of India. But Rafale doesn’t have the ability to wash with the electorate as an emotional issue. Can the Modi Government’s alleged failure, therefore, become the trump card for the Congress? If the party’s think-tank believes it can take the electoral plunge without any positive agenda, or without any performance-oriented narrative, it is, perhaps, going through a delusional phase. There will be near unanimity among non-BJP parties and also a large section of the academia and economists that demonetisation was a blunder and that the implementation of the Goods and Services Tax (GST) could have been done in a better way, and perhaps, in a phased manner. There can be no argument on this front. But can this failure of the ruling party become the main weapon of the Congress fightback?

At present, all that the Congress has offered include loan-waivers to farmers in States like Madhya Pradesh, Chhattisgarh and Rajasthan, where the party won last year, triggering speculation that it would do well in the general elections too. But can loan-waiver alone be the panacea of all the ills that plague the farming community? No farmer, agriculturist or expert dealing with the farm economy and farm crisis thinks so. At best, it is a pill which can only remove the symptom but can never fight the cause of the disease.

So, what can the Congress offer to the farmers of the country? Farm distress is, perhaps, the single most reason to make the Modi Government unpopular among the rural votebase. Low farm prices have ensured that the farmers’ returns from investments in crop, seeds, fertilisers and land are reduced and have, in fact, come down significantly in recent years. But will the Congress implement the recommendations of the Swaminathan Commission report, which advocates a new mechanism for fixing Minimum Support Price for their crops? We have not heard much from the party on this front except some vague promises.

In fact, even in Punjab, where the party has been in power for almost two years now, and which is plagued by farm distress and farmers’ suicides for long, we are yet to hear much except that provisions for cosmetic loan-waivers have been made. Farmers continue to be stressed in the State even though the Congress under Capt Amarinder Singh took over the reins of power almost two years ago.

If you do not have anything concrete on the farm front, that’s fine, you can take a call later. But what are your plans about job creation and giving impetus to the economy? There is no denying that demonetisation, which was followed by GST in quick succession, affected job growth. In fact, the combine triggered massive job losses. Has the Congress come up with a plan to infuse new life to the economy and create jobs? The answer obviously would be a big no.

In 2014, when Prime Minister Narendra Modi was bidding for power at the Centre, he, too, attacked the Congress left, right and centre, using every possible imagery to pin down the party and expose its inner contradictions. This was similar to what the Congress is doing right now. At that time, Modi found traction among voters with three crucial words — Modi, Modi, Modi — that echoed in almost all public meetings in the Hindi heartland throughout the campaign period. But at the same time, while tomtomming his personal charisma, he  had also come out with slogans of creating two crore jobs every year and gifting 15 lakh in every bank account from the black money which was supposedly parked in foreign accounts. Of course, the promise of achhe din acted as the catalyst that instilled hope among a large section of the population, cutting across caste and religious lines.

Five years down the line, all of these largely remain a promise and the slogans raised then have been given a decent burial. Even the “Gujarat model of development”, which was supposed to be implemented at the national level, remains forgotten and no one hears anything about it anymore. What Modi and his party are doing this time around is what they did in 2014 — virulently attack the Congress.  Dynasty and alleged acts of omission and commission are the top subjects on which the grand old party can be attacked. There is no attempt to even sell a rescue plan for stressed Indians.

So, there you are: Both the main contenders are calling each other names, they want the people to believe that the other is corrupt and are trying to attract the voters’ eyeballs with their colourful vocabulary, which they are using against each other. What catapulted the BJP under Modi in 2014 was complete disillusionment with 10 years of UPA regime, charges of big ticket corruption, perception of a remote-controlled Prime Minister and loss of hope among the electorate for the future. Modi brought in a wave of fresh air, positive change, political machismo and above all, hope for achhe din with some specific policy measures.

In the absence of a positive narrative among both contenders for power — BJP and Congress — electioneering so far has been reduced to charges and counter charges, attack and defence. Of course, real electioneering is yet to pick up and will be seen only after the nation gets over the Pulwama tragedy. But people are still wondering if elections this time round would be fought on negative agenda, making both sides look opportunist than committed visionaries who will see us through.