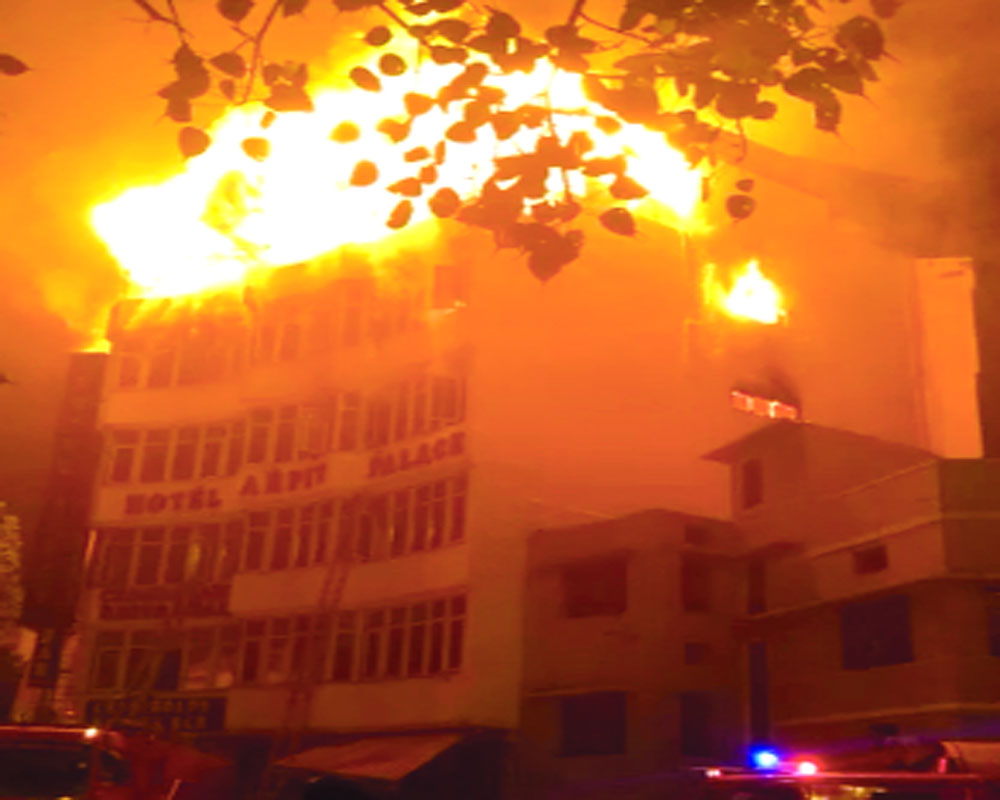 Some charred to death, others asphyxiated; woman, child take miscalculated plunge to death

Karol Bagh, one of the most frequented business hubs in the national Capital, witnessed a horrific incident in which 17 people died while 35 people were injured after a massive fire broke out at a hotel on Tuesday. Some of the victims were charred to death and others were asphyxiated by the poisonous fumes. A woman and a child jumped from the fourth floor to save themselves from the blaze but they died on the spot. Most of deaths took place due to asphyxiation, authorities said.

Guests at the Hotel Arpit Palace that is popular with budget and business travellers, were unable to use corridors to escape because of wooden panelling. The hotel didn’t have proper fire escapes and the emergency exit door was locked. “The fire could have   been  caused by short-circuit,” said Delhi Fire Services (DFS) Chief Fire Officer, Atul Garg.

One of the staff members said that the hotel was built around 25 years ago and had 45 rooms. At the time of the incident about 41 rooms were occupied and there were nearly 53 people inside the hotel. A group of eight tourists from Myanmar were also staying at the hotel. Three of them, including two women, were killed and one was injured.

According to Garg, the blaze first erupted on the first floor of the hotel around 3.30 am, trapping many guests who were asleep. Two persons, including a child, who jumped from fourth floor of the building in a bid to save themselves died. They are yet to be identified.

“A call was received at 4.35 am, about an hour after the fire started and 28 fire tenders were rushed to the spot. If the fire department was informed earlier, life could have been saved,” said Garg.

“An eyewitness of the incident told us that he saw fire at first floor. He saw the residents scurrying to safety to top floor of the hotel. However, the fire spread like wildfire due to wooden interiors in the hotel, giving them no time to escape. They were trapped on the fourth floor,” he said.

Video grabs of the blaze taken by an eyewitness showed flames billowing out from the terrace into the pre-dawn darkness. “A 43-year-old woman suffered 45 per cent burn injuries while one person is still missing.

Thirteen of the bodies were taken to Ram Manohar Lohia Hospital, two to Lady Hardinge Hospital and two to BLK hospital,” said a senior police official.

“A majority of the deaths took place due to asphyxiation while there were some who succumbed to their burns. Some used fire extinguishers were found suggesting people trapped inside tried to douse the flames in a bid to escape. But escape may have been almost impossible,” the senior police official added.

Mandeep Singh Randhawa, the Deputy Commissioner of Police (DCP), Central district said that a First Information Report (FIR) has been registered against the management of Hotel Aprit Palace.

“The case has been registered under Section 304 (culpable homicide not amounting to murder) and 308 (attempt to commit culpable homicide) of the Indian Penal Code (IPC). Conviction under both the sections leads to seven years of imprisonment, the DCP said.

For Somshekhar from Ernakulam in Kerala, whose sister was the first one to alert them to the smoke and has been missing since, it has been a nightmare without end.

The family had come to attend a wedding in Ghaziabad and was getting ready to go to Haridwar when the fire started. His sister rushed out to check what was happening and that’s the last he saw her.

“The entire pathway was full of smoke. My mother and brother were along with my sister at the time. I immediately came to the room and opened it for fresh air and we managed to escape. We were on the second floor of the hotel,” he said.

A busy commercial centre criss-crossed by narrow alleys where electric wires dangle overhead, Karol Bagh houses around 800 hotels and is usually packed with tourists and shoppers. According to people in the area, the hotel was put up for auction by a State-run bank at a reserve price of Rs 27 crore on December 31, 2018.

Prime Minister Narendra Modi was among those who condoled the loss of lives. “Deeply saddened by the loss of lives due to a fire at Karol Bagh in Delhi. I convey my condolences to the families of those who lost their lives,” he tweeted.

Putting blame on Hotel authorities, Union Tourism Minister KJ Alphons said that the emergency exit was “too narrow” and also locked. “There were also a lot of wooden structures which may have helped the flames spread,” he added.

The Minister who visited the site and RML Hospital said that the emergency exit was locked at night.

Indicating another problem area, Sandip Khandelwal, president of the Delhi Hotel and Restaurants Owners Association, claimed fire tenders reached 15-20 minutes late because the area was barricaded for security purposes at night and fire tenders had to take a longer route to reach the hotel.

Taking a serious note of the incident, the Delhi Government ordered a magisterial probe. Home Minister Satyendar Jain said he has also directed the fire department to inspect buildings which are five floors or more and submit a report on their fire safety compliance within a week. Action will be taken against those found guilty,” he said.

The hotel was first granted a licence in October 2005 and was renewed every year. The last time it was renewed on May 25, 2018 and was valid till March 31.

Following the incident, North Delhi Municipal Corporation (NMC) Mayor Adesh Gupta has ordered an enquiry to ascertain the lapses in Karol Bagh fire incident. Gupta said that the enquiry committee has been set up to probe the matter and the report will be submitted within three days. Based on the report action will be taken against those found guilty, he said.

Delhi Chief Minister Arvind Kejriwal announced Rs 5 lakh compensation for the next of kin of those killed. “It is a very tragic incident. It seems that there may have been some lapses. A magisterial probe has been ordered to investigate the cause of the incident,” he said.

The Delhi Government also cancelled its fourth anniversary celebrations in view of the tragedy.