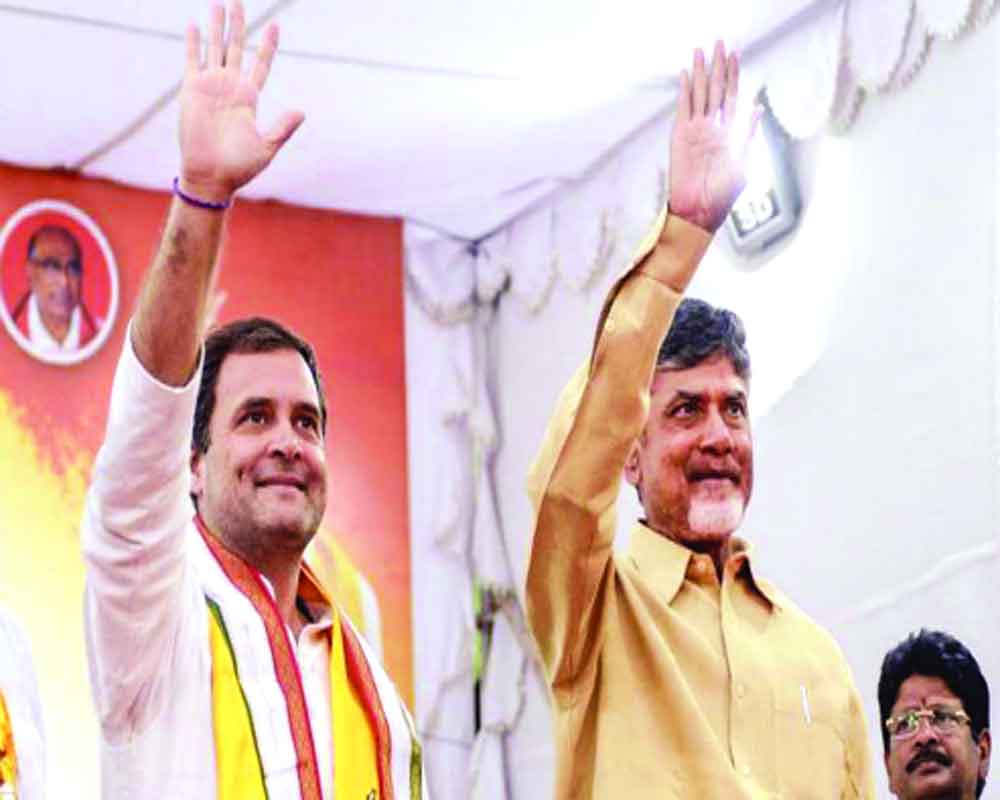 Opposition parties have scheduled a meeting on May 21, two days ahead of the Lok Sabha results, to prepare a  plan to approach the President of India in case the BJP-led NDA is not able to cross halfway mark in the Lok Sabha to impress upon him not to call the single largest party to form a Government.

Andhra Pradesh Chief Minister N Chandrababu Naidu, who has been toiling hard to unite the Opposition, called on Congress president Rahul Gandhi on Wednesday and discussed plans to hold the meeting.

“Naidu and Rahul discussed the post-poll scenario and more or less agreed to call a meeting of Opposition parties on May 21,” said AICC leader.  In a brief meeting, the Telugu Desam Party (TDP) chief is believed to have also discussed the voter-verified paper audit trail issue, voting percentage in the five phases, besides the reports about the Andhra Pradesh Assembly election results.

The Rahul-Naidu meeting comes a day after TRS chief K Chandrashekhar Rao met Kerala Chief Minister Vijayan Pinarayi to revive the formation of a non-BJP and non-Congress Federal Front at the Centre. Political sources said though KCR has always been seen  “close” to the NDA fold,   his meeting with Vijayan opened the possibility of him joining the Congress-led Opposition camp as Left may not support the BJP.

The Lok Sabha has 543 elected members and the majority mark stands at 272. The BJP had won majority in the 2014 general elections with 282 seats and the combined strength of the NDA went up to 336 seats in the Lok Sabha.

The Andhra Pradesh CM was in Delhi to attend the Supreme Court hearing on a petition filed by the Opposition parties to review its judgment rejecting 50 per cent random physical verification of EVMs using VVPATs.  The court dismissed the petition following which the parties again met the Election Commission to press their demand.

After meeting Rahul, Naidu headed for West Bengal to attend public rallies in support of Chief Minister Mamata Banerjee for the next two days.

Sources said in case the May 23 result throws split verdict, 21 Opposition parties are planning to meet the President  to impress upon him not to call the single largest party to form a Government.

“The parties will sign a letter before the results of May 23 and convey their viewpoint in support of an alternative Government. The reason for this preemptive move is to ensure that the President does not give the single largest party an opportunity to attempt and break regional parties and alliances,” sources said.

Recalling an instance post the 1998 elections, President KR Narayanan had insisted that Atal Bihari Vajpayee produce letters of support before he was called to form the Government and seek a vote of confidence on the floor of the House. While BJP had won 178 seats, the alliance had 252 members. The Government, however, collapsed after 13 months, when it lost the vote of confidence by a single vote.