Shinde may step into Rahul’s shoes

Shinde may step into Rahul’s shoes 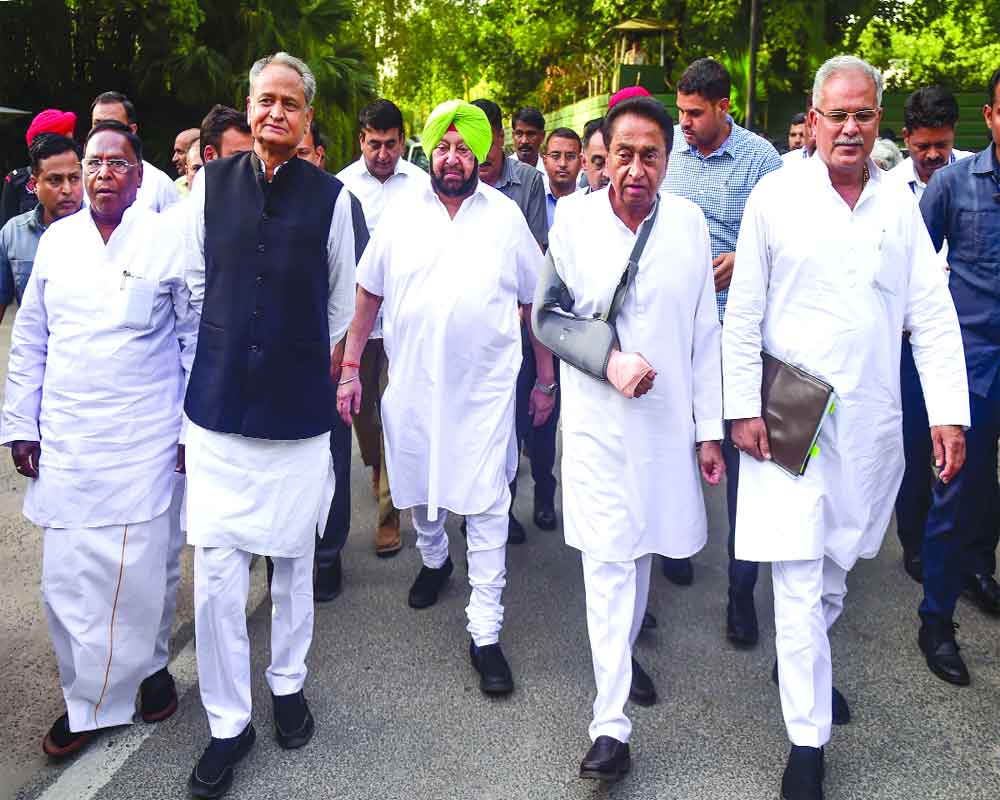 Congress chief Rahul Gandhi on Monday once again made it clear to senior party leaders, including the Congress Chief Ministers, that he would not take back his resignation amid indication that veteran Sushilkumar Shinde, a dalit leader from poll-bound Maharashtra, may be given the chance to lead the party.

The Congress’ first family is believed to have agreed on Shinde’s name after another veteran AK Antony declined the offer to lead the party citing health conditions.

Other Congress leaders whose names were doing the rounds as probable choice for the post of Congress president were Ghulam Nabi Azad, Ashok Gehlot, Mallikarjun Kharge, Janardhan Dwivedi and Mukul Wasnik. However, Shinde emerged as the front-runner for the post as he is considered as a loyalist of the Gandhi family since 1971 and a well-known dalit face.

AICC sources said the Gandhi family has reportedly given a green signal to Shinde’s appointment as the next Congress chief. The development comes as Rahul has reiterated that there is no going back on his decision, despite requests by leaders from his party and outside to continue in the post.

Rahul also chaired a meeting of top leaders of J&K in Delhi and discussed the overall political and security situation of the State and advised the State leadership to launch an offensive against the BJP for its “failure” on various fronts.

“It was a good meeting that lasted around two hours. We conveyed and apprised him about the feelings of Congress workers across the country and urged him to continue to lead the party. We hope he will positively view our request to him to continue as Congress president,” Gehlot said after the meeting.

Sources said while the Chief Ministers  made a last effort to persuade Rahul Gandhi to continue as Congress chief, Rahul reportedly told them that he has already conveyed his decision to the CWC and would not relent.

The sources also said that the Congress Chief Ministers took moral responsibility for the party’s defeat in Lok Sabha elections and some also offered their resignations.

“In elections, victories and defeats happen. But the high command decides on future course of action. This issue has already been resolved as all Chief Ministers have offered their resignations at the meeting of Congress Working Committee on May 25,” Gehlot said when asked about their offer to resign at the meeting.

Gehlot was flanked by Madhya Pradesh CM Kamal Nath, Chhatisgarh CM Bhupesh Baghel and Puducherry CM V Narayanasamy, later to be joined by Punjab Chief Minister Amarinder Singh. This was Rahul’s efforts to reach out and continue meeting his leaders, particularly from the poll-bound States and serving States.

In the meeting related to J and K, the leaders deliberated upon the latest political situation in the wake of the results of the recent Lok Sabha elections and the preparations for the next  assembly elections.

Rahul asked the party leaders from the state to activate the cadre at various levels to highlight issues of the people and expose the “failures and falsehood” of the BJP. He said the leadership should highlight the issues of people in all three regions of the state with a view to launch an offensive against the BJP for its “failure” on various fronts.