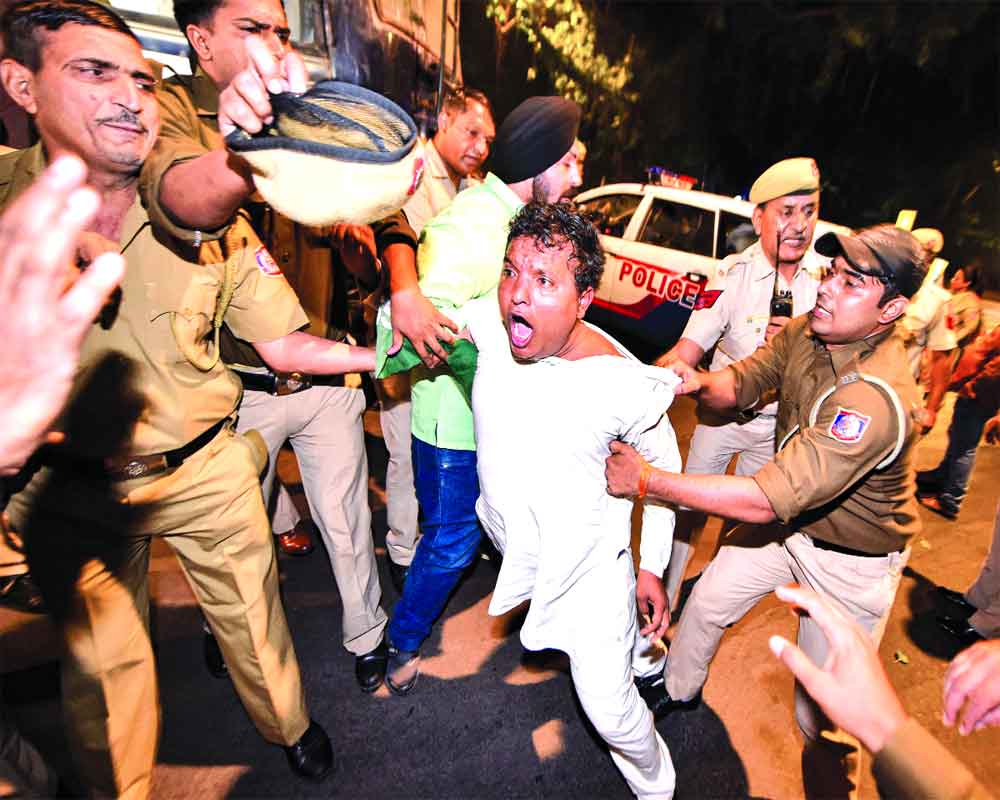 Elite force for only PM now; Gandhis to get Z-plus security

The Centre on Friday withdrew the SPG security cover of Congress president Sonia Gandhi and her children, Rahul Gandhi and Priyanka Vadra and downgraded them to the Z-plus security provided by CRPF.

The elite force will now guard only Prime Minister Narendra Modi. Home Ministry senior officials said the call on the withdrawal of the SPG cover was taken after periodical review of threat perceptions of the Gandhis.

The Gandhis will be without SPG protection for the first time in 28 years. They were included in the VVIP security list following an amendment in September 1991 in the SPG Act of 1988. Under Z-plus security by CRPF, they will have commandos from the paramilitary force in close proximity, besides guards at their homes and whereever they travel in the country, the officials said.

The officials said on many occasions, Gandhi family had violated SPG regulations. They said Sonia and Rahul on many occasions refused to use bullet-resistant (BR) vehicles and avoided the SPG commandos during foreign trips. In 2016, then Home Minister Rajnath Singh in the Lok Sabha blamed Rahul for keeping the SPG officers in dark during his foreign visits.

Referring to Rahul, the official said, during 2005-2014, the Congress leader had travelled in non-BR vehicles on 18 visits to different parts of the country. Since 2015, there have been 1,892 occasions (till May 2019) when Rahul travelled in a non-BR vehicle in Delhi, which amounts to about one trip a day.

Besides, on 247 occasions (till June 2019), he travelled in a non-BR vehicle outside Delhi. Out of the total 156 foreign visits that Rahul undertook since 1991, he did not take SPG officers on 143 visits. In most of these 143 foreign visits, he shared the travel itinerary at the eleventh hour, preventing SPG officers from accompanying him on the tours.

Referring to Sonia, the official said she did not use SPG BR vehicle on 50 occasions, while travelling in Delhi from 2015 to May 2019. On all but one of these occasions, Rahul himself drove her non-BR car. She also undertook 13 unscheduled visits to various places in the country in the last five years (till May 2019) during which she used non-BR cars. The Congress president also did not take SPG officers on 24 of her foreign visits since 2015. When the Modi Government came to power in mid 2014, Gandhi family wrote to remove the SPG officers from Rajiv Gandhi Foundation’s office.

On Priyanka Gandhi Vadra, the official said since 2015, till May 2019, she did not use SPG BR vehicles for her travel on 339 occasions within Delhi and 64 occasions at other places in the country. Priyanka Gandhi used non-BR vehicles against the advice of SPG officers on these visits. Out of the total 99 foreign visits that Priyanka has undertaken since 1991, she took SPG security cover only on 21 occasions and refused to take the security for other 78 visits.

On most of these tours, Priyanka shared her travel plan at the eleventh hour rendering it impossible for SPG to depute officers for her security. Since May 2014, on several occasions, she had reportedly levelled allegations against SPG officers that they were collecting her personal and confidential information and sharing with unauthorised persons. She even allegedly threatened top officials of the SPG with legal action. The SPG has from time to time countered such allegations by clarifying that it confines its work to strictly the official charter, the official said.

SPG protectees, under the rules, are provided with guards, hi-tech vehicles, jammers and an ambulance in their convoy. In August this year, the Government withdrew the SPG cover of former Prime Minister Manmohan Singh. The SPG Act, enacted by Parliament in 1988, was initially supposed to provide security to only the Prime Minister and to the former Prime Ministers of the country for 10 years. In 2003, the Act was amended and the time frame of 10 years was reduced to one year.

It recommended the formation of a Special Protection Group. In 1985, an inspector general rank officer was nominated as its first director and the organisation continued to function on an executive order for another three years. VP Singh Government had withdrawn Rajiv Gandhi’s SPG security. Rajiv’s family was provided SPG after the threat perceptions from LLTE in 1991.