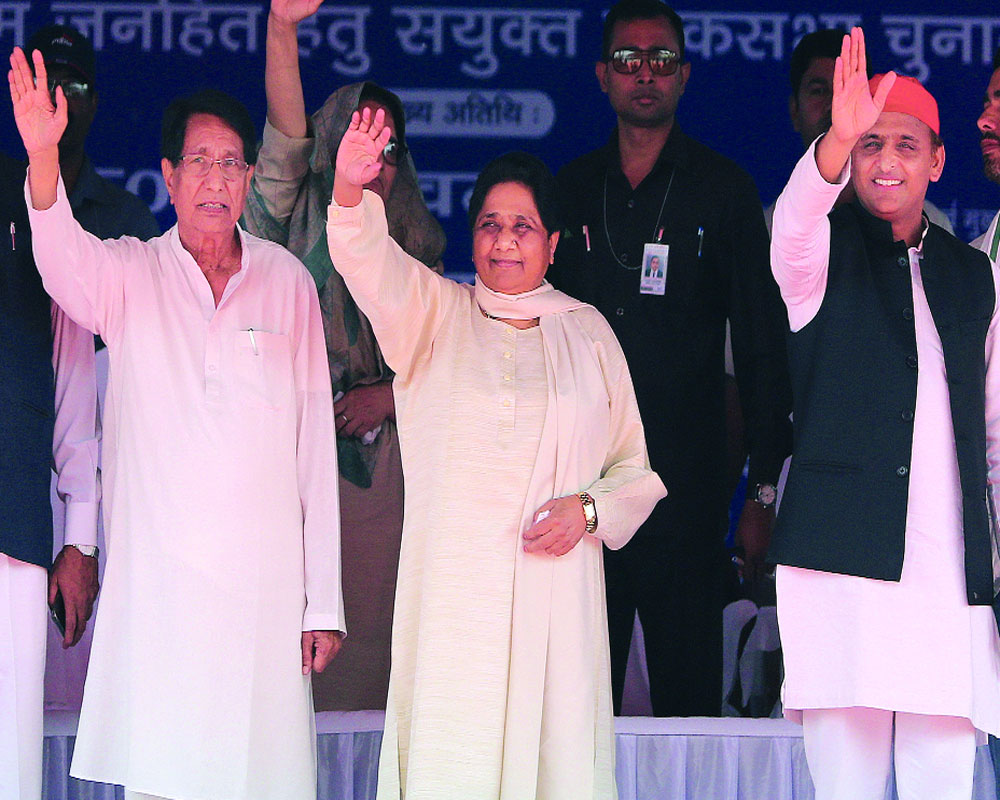 Afraid of Congress eating into community votes, alliance woos Muslims, says only it can defeat BJP

In their first joint rally, the top guns of Uttar Pradesh Opposition grand alliance on Sunday targeted both the BJP and the Congress and cautioned the minority community not to waste their votes by backing the Congress.

In a massive show of strength in Saharanpur district, which goes to polls in the first phase on April 11, BSP supremo Mayawati, SP chief Akhilesh Yadav and Rashtriya Lok Dal leader Ajit Singh addressed the rally, and announced only their alliance can challenge the BJP.

“The Congress is not strong enough to give a tough fight to the BJP. Only the grand-alliance can,” said Mayawati.

“I want to tell the Muslim community to not let their votes divide. I ask you to vote together for BSP, SP and RLD. I am warning, especially people of Muslim community, that Congress isn’t in a position to fight BJP in UP. Only ‘gathbandhan’ can fight BJP. The Congress knows this but they’re going by the mantra ‘Hum jeete ya na jeete, gathbandhan nahi jeetna chahiye’. Therefore, Congress party has fielded candidates from such castes and religion which will benefit BJP,” she said.

With a large number of people in the rally being Muslims, she asked the minorities to vote en bloc for the BSP-SP-RLD alliance after accusing the Congress of trying to split the anti-BJP votes. “If Muslims want BJP to lose, they have to stand firmly behind gathbandhan. The alliance is winning, provided they don’t tamper with the Electronic Voting Machines (EVMs),” said Mayawati, adding that the voters would end the “drama of chowkidari”.

Modi, the BSP leader said, has not fulfilled even one fourth of the promises he made before the 2014 Lok Sabha elections that brought him to power. The Prime Minister has also failed to protect the borders, she added, citing increasing instances of terrorism in Jammu & Kashmir in particular. Mayawati did not spare the Congress either, calling its recently released election manifesto as ‘hawa-hawai’.

The BSP leader said her party never issued election manifestos as she believed in talking less and delivering more.

Samajwadi Party chief Akhilesh Yadav asked voters to not vote for Congress saying there is no difference between the party and BJP. “There is not much difference in Congress and BJP, if you will look at their policies. They are both same. This grand alliance is meant to bring change in the country, but Congress party doesn’t want that. Instead of defeating the BJP their priority is to revive and rebuild the party in UP,” he said.

He said the grand alliance of Opposition parties in Uttar Pradesh will ensure the removal of all ‘chowkidars’ and the country will get a new Prime Minister after the Lok Sabha polls. Taking a swipe at the ruling BJP, Akhilesh said during the holy period of Navaratri no one should lie.

“In 2014, we trusted a ‘chaiwala’ (tea seller), the poll promise of crores of jobs and so many other promises. Now we are being told to trust the ‘chowkidar’. We will ensure removal of ‘chowkidars’ (watchmen) from all the ‘chowkis’ (post),” he said at the joint rally of the SP, BSP and RLD here.

“We want to appeal to the BJP... during this holy period of Navratri you should pledge not to lie. We want to make sure all our candidates win by a huge margin, so that the country can get a new Prime Minister,” he said. “These people call themselves custodians of religion. But they don’t even know how to take a holy dip in the Kumbh.

If you compare the Congress and the BJP they are just mirror images of each other, Akhilesh said.

Hitting back at PM Modi for his criticism of the alliance, the SP leader said, “This ‘gathbandhan’ (alliance) is not ‘milawat’ (adulterated), this is ‘mahaparivartan’ (mega change). They call us ‘milawat gathbandhan’... they are drunk on power. This is an alliance for electing a new Prime Minister.” “Our borders are still not secured... they have betrayed the country.

Striking the chord of communal harmony in Deoband, where there is a sizeable Muslim population, Akhilesh said Saharanpur is skirted by Mata Shakumbhari Devi on one end and Darul Uloom on the other. “There are leaders who only spread hatred. If you ask them about old promises, they will not speak on them,” he said.

RLD chief Ajit Singh took a swipe at the BJP’s “achche din” saying the good days were not meant for the people of the country but for Prime Minister Narendra Modi himself.

Ajit Singh, contesting from Muzaffarnagar Lok Sabha seat did not mention anything against Congress, as the party has not fielded its candidate against him. Several other senior leaders of the alliance along with candidates of the eight seats which go to polls on April 11 were present on the dias. This was the first joint election meeting of the “mahagathbandhan” in western Uttar Pradesh, parts of which go to the polls in the first phase on April 11.