Hope lives behind the veil

Hope lives behind the veil 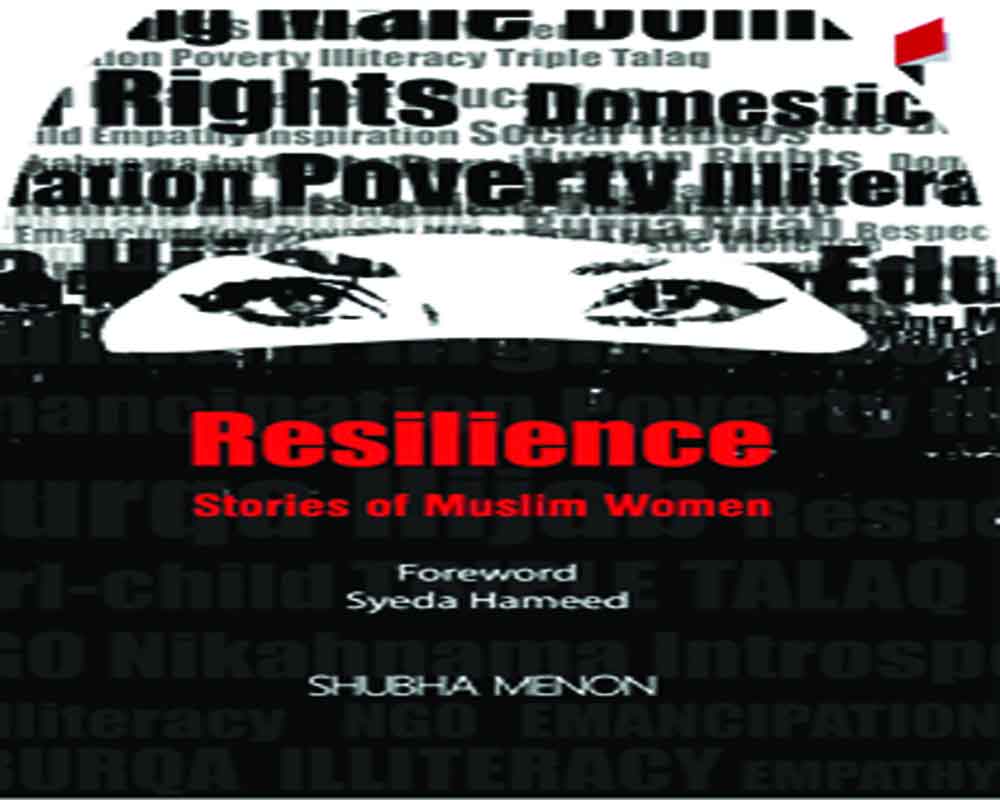 Resilience is an important book on Muslim women in contemporary India. It brings out stories untold. There are so many layers to examine, writes Jayshree M Sundar

In a refreshing departure from stereotypical portrayals of muslim women, their helplessness and ignorance, the book Resilience: Stories of Muslim Women explores the lives of 11 women who fought against all odds to shine, once they got the opportunity to study in a tiny adult education centre. The author, Shubha Menon, has documented life of girls and women of Nizamuddin Basti, Delhi, in a manner that makes the reader a partner in her adventure. The reader is taken through the winding gullies, narrow staircases and tottering houses, right into the homes of the girls.

The Seher Centre was an experiment in education started by social activist Shabnam Hashmi. At the time, Shabnam herself was a young girl studying in Russia. She was home for the summer holidays and went with a friend to Nizamuddin Basti to volunteer as a teacher for young girls. When it was time for her to go back to Russia, two of the girls begged her not to, as they had seen hope in their lives after she had started teaching them. Shabnam could not turn her back on the girls. She stayed back and started the Seher Education Centre. From 1980 to 1985, about 400 girls studied in the Centre. The book encompasses the stories of 11 girls whose stories unfold one by one.

The girls’ stories are poignant and real. There is Farida, who started wearing a burqa at 9, got married at 12 and was a mother of two, divorced and abandoned by 16. Today, she runs a non-profit, teaching other young girls like her. Mussarrat, who was virtually a prisoner in her own home, forced to do domestic chores all day. She is now a health supervisor with the Aga Khan Foundation. And Parveen, who was turned away from the Gandhi residence because she couldn’t write her name in the entrance register. Today she a Sewa Dal worker and political voice for a political party. The stories of Syeda, Asma, Ishrat, Shahjahan, Najma and Ayesha also show the transformation that the Seher Centre brought about.

The writer recreates the tiny room where classes were held. We learn about the rivalry between the girls, their favourite teachers and how their thoughts are gradually changed, till from burqa-clad silent citizens they become agents of change in their own right. We also learn about the various forces at play in the basti, those that opposed girls education. There are the elders of the basti who disapprove of girls going to school. There are the Pirzadas who want Shabnam to teach their kids exclusively because they do not want their children to share space with lowly ‘Ghosis’. There are opposing forces in the basti and old mores are at loggerheads with new thinking. The Shah Bano case is at the centre of this dichotomy. The author dwells upon the case at some length.

The writer has included conversations with eminent, educated Muslim women — Syeda Hameed, Warisha Farasat, Zarina Bhatty, Seema Mustafa, Noor Zaheer — who talk about the state of Muslim women in the country. These conversations are a good counterpoint to the conversations with the Seher girls. The Markaz versus the Dargah is another contradiction of the basti. The Markaz propagates pristine orthodox Islam which is strident and austere. The author does not deride one practice at the cost of the other. Their parallel existence may occasionally clash but seldom becomes a major flare-up. The reader is gently led through this labyrinth of contradictions and incongruities which are both literary and figurative. A hidden world is revealed in easy flowing prose. What gives the book its unique flavour is the anecdotes and tales about the Nizamuddin Basti, the dargah, the Auliya, the graves, monuments, etc. The book is full of interesting details that lend colour to the stories of the girls.

It was not just the old and new that were clashing in the basti. There was Shabnam Hashmi herself, a communist-atheist, ultra-liberal rebel of sorts. She never wore a burqa and sported short hair and spectacles. Just the way she looked, raised the red flag for many in the basti. Subjects like sex, reproductive rights, gender parity, taboo for Basti dwellers, were freely discussed in the Seher Centre. Shabnam’s total lack of fear against a menacing, threatening phalanx of Basti old men, guardians and gatekeepers of the ‘izzat’ of their women and girls, was cause for alarm. Girls, who were not allowed to uncover their heads in their own homes or sit on a chair in front of their elders, began to learn alphabet of rights. The Seher teachers who included Shabnam’s mother and sister, were berated because of the fear that they would make the girls ‘azad’ and ‘la mazhab’. Underlying this popular slogan verbiage was the larger fear that Basti women may begin to think and assert their rights.

This book brings out the unique world of the Nizamuddin Basti. One which you may not find on a map. Where, in the by lanes of crowded homes with limited means women broke out of the shackles of stereotypical roles and fearlessly fought their way to an education. Where women helped women.The book has interesting anecdotes about the ghosts that coexist with human beings there and the sounds of urdu,the music from the dargah,and the fragrance of kebabs which create the unique atmosphere of this area.

Resilience is an important book on Muslim women in contemporary India. There are so many layers to examine. And, Seher comes out as a unique experiment, which not only transformed all those women who studied there but their future generations.