Smart Cities And The Need For A Mobility Plan

Smart Cities And The Need For A Mobility Plan 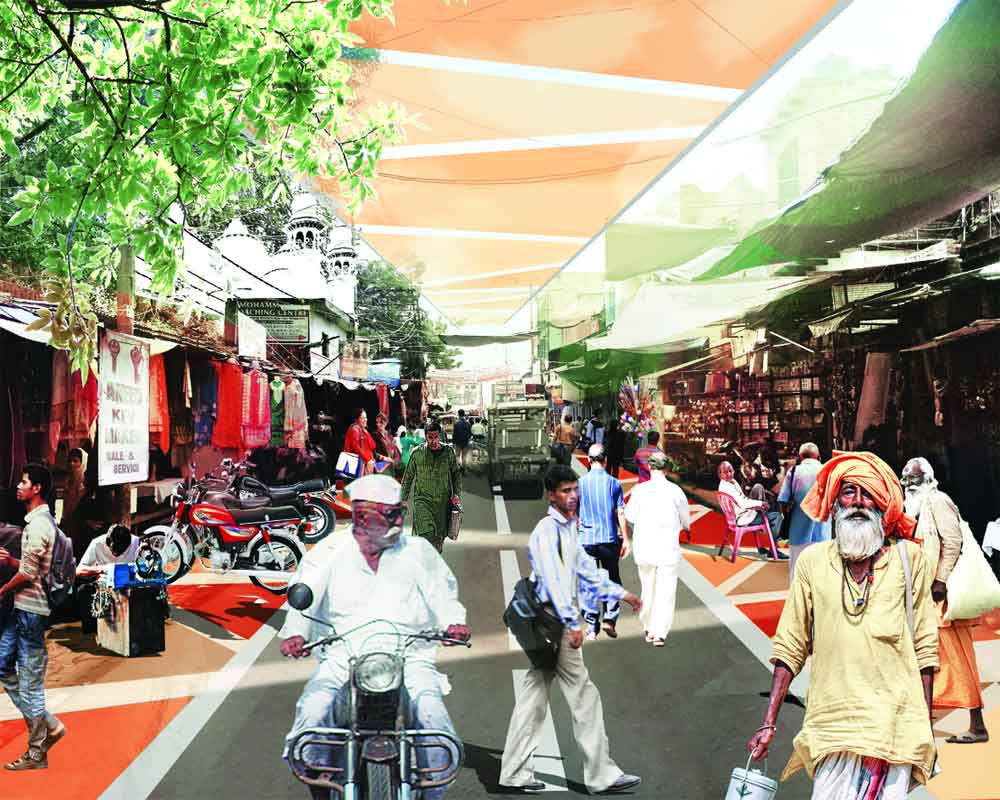 Smart cities of the future should view the community as the stakeholder of the city. What they need is an urban plan that is a result of different stimulus, such as climatic and local conditions, financial forces and community engagement

According to the Ministry of Urban Development (2013), cities accommodate nearly 31% of India’s current population and contribute 63% of GDP (Census 2011). Urban areas are expected to house 40% of India’s population and contribute 75% of India’s GDP by 2030. This requires comprehensive development of physical, institutional, social and economic infrastructure. All are important in improving the quality of life and attracting people and investment, setting in motion a virtuous cycle of growth and development. Development of Smart Cities is a step in that direction

Smart cities mission was conceived by the Government of India in 2015 as a response to address the numerous challenges that the growth of urban population constitutes. The mission aims at providing core infrastructure, a quality life to the citizens along with clean and sustainable environment, by utilising information technology.

One of the key features of the upcoming smart cities would be to provide walkable localities for reducing congestion, air pollution, and resource depletion, boost local economy, promote interactions and ensure security. The road networks that will be created would not only be for vehicles and public transport, but also for pedestrians and cyclists ((MoUD, 2013). Preserving and developing open spaces — parks, playgrounds, and recreational spaces — in order to enhance the quality of life of citizens, reduce the urban heat effects in areas and promote eco-balance, will also be an area of focus.

To achieve all of this, architects (as nation builders) have a crucial role to play in the smart city projects. An architect is the one with the vision and has a much more responsible role to play as compared to a builder/developer. While a builder invests money in buying the land, developing it and selling it for monetary gain, it is the architect who envisions the city from a micro to a macro level. While designing, the architects must respond to varied climates, cultures and typology; and understand every business. Architects working on smart cities should be able to unite teams across urban local bodies. They should be able to bring together public and private stakeholders within the ecosystem; integrate the needs of policymakers, technologists and innovators to create a holistic outcome. They must design infrastructure that is sustainable and in sync with the ecosystem.

In the current scenario, absence of certain aesthetics and futuristic approach is often lamented. This could be because the realty trends show a heavy inclination towards a builder dominated thought behind construction. The challenge for smart city architects is how to integrate strategies and solution for pedestrianisation and rejuvenation of public places without rebuilding the infrastructure.

For architects, smart cities ought to be perceived as self-evolving bazaars that aim to be net zero in water, energy and waste to landfill. A design model with a socio-contextual approach needs to be derived from a combination of the environmental master plan and the carrying capacity of a city. Then, by taking a bottom-up approach, design solutions can be introduced within the existing infrastructure; retrofitting of existing structure then can be done by upgrading the supporting infrastructure.

An example for this could be the upcoming smart city, Aligarh, where street design is meant to focus on providing expansive footpath pathway, shaded spaces and pause points. These pause points will consist of books and coffee shops. Multi-modal streets will be set-up through balanced allocation of space between the modes. They will help in increasing the carrying capacity of a street; and this redistribution of space will offer safe, convenient and sustainable mobility options for both pedestrians and motorised vehicles.

By reducing the use of private cars, we’ll be able to increase space for public and commercial use. Green street designs in a smart city should serve more people with the same space; they should be viewed through the lens of placemaking so that public spaces in the city can promote people’s health, happiness, and well-being. And utilising multi-modal streets will help us achieve that. Furthermore, by rejuvenating lakes and water bodies, and making the existing temple the focal point will enhance community engagement and wellbeing.

Smart city architects should also address the mobility and accessibility needs of the differently-abled. For example, in Jerusalem, architects took the initiative to make the city wheelchair friendly. The renovation project involved evening out paved streets, ramps, inclines and hand bars. This was further complimented by accessible fleet of buses, wheelchair specifications for all taxis and easy access to toilets.

Artificial intelligence is going to be the cornerstone of smart cities, especially while implementing a mobility plan. Los Angeles, which is one of the most congested cities in the world, is already analysing real-time data feed from the sensors and cameras installed to notify the users of congestion and traffic signal malfunctions. However, as technology keeps evolving and urbanisation keeps increasing, the challenge is reinvention of street design and traffic infrastructure; coordination between traffic authorities and synchronisation with artificial intelligence.

Urban planning in smart cities should focus on public places that provide room for socio-cultural interaction and allow people to experience a city intimately. This can be done by rehabilitating waterways in the city as an alternative transport network for cyclists and pedestrians. The Delhi nullahs have a network spreading 350 kilometres with 20,000 branches, across 1750 acres of land, leading to tributaries that connect to the Yamuna river. Morphogenesis’ revival proposal initiative stemmed from the realisation that the city has stopped generating memories. These nullahs are 700 years old and were built by the Tughlaq dynasty to provide water to Delhi’s old cities. Many of the city’s famous archaeological sites are situated along the nullah network. The nullahs can naturally interlink these nodes and a historic route can be charted through the rich heritage of this city. Currently, these nullahs are an unhygienic drain, which pollute the environment. They can be rejuvenated by using a system of organic reed beds and aerators to clean the sewage. A resurrected waterway system in the city can improve the health of the public and marine life.

Heritage conservation can play a crucial role in helping the local communities and rejuvenating public places. Architects such as Ratish Nanda, Projects Director of Aga Khan Trust for Culture, have done tremendous work through the years in giving heritage sites such as Sunder Nursery (Central Park, New Delhi), a facelift. They’ve recently started working on reviving the original function of baolis, that is water harvesting, in the Arab ki Sarai complex of Humayun’s Tomb. Furthermore, conservation of heritage sites help in providing a sense of identity; they help to bring communities together through a shared understanding of history and culture.

Current water scarcity and flash flood crisis indicate that smart cities will need smart water management. Architects as authors of cities need to focus on green buildings. Over the years, green buildings have proved to be effective in dealing with pollution problems, waste generation and environmental degradation. The green building market in India is expected to double at 10 billion square ft, valued at around USD 35-50 billion. This is not all, according to data shared by IGBC, until 2017, more than 4300 buildings in the country accounted for utilising green technology.

Green buildings optimise the use of recycled greywater. Benefits of recycling wastewater include reduced use of freshwater, less strain on septic tanks, groundwater recharge, plant growth and reclamation of nutrients. Modern day low flow plumbing fixtures come equipped in green buildings. They conserve water but also provide convenience and ease of maintenance. They moderate the flow of water by using aerators, which break the stream of the water into tiny streams so that air gets mixed with it. They are used in faucets and showerheads. People use water lavishly when water flows in fixtures. Green buildings that use low-flow plumbing utilise 30% less water than standard flow. And this helps in water conservation and reduction of water bill.

Our approach should to be to utilise the wisdom of the past that is traditional Indian architecture, which has always been viewed as a response to paucity of resources of water and energy. Today, environmentally sensitive architecture is no longer a choice, or a “layer” that can be applied to the design of a building. Rather, it must be integral to the process of design, from concept to completion and to the entire lifecycle of the development. The need of the hour are green buildings, and architects as nation builders need to make a choice, either continue as if it’s business as usual and face the consequences or start going green.

For successful execution of any strategy or plan, community participation is crucial. Residents need to view themselves as stakeholders and take responsibility of their cities upon themselves. Delhi’s Nizamuddin East is an example of how a community came together, took the initiative themselves to set-up water harvesting facilities in the colony to address water shortage problems. The community members were able to install 17 structures in parks, which are regularly cleaned and maintained.

Smart cities of the future should view the community as the stakeholder of the city. They require more than just utilisation of technology. What they need is an urban plan that is a result of different stimulus such as climatic conditions, financial forces, urbanisation, local conditions, technologies, and most of all, community engagement.

The writer is an architect by profession