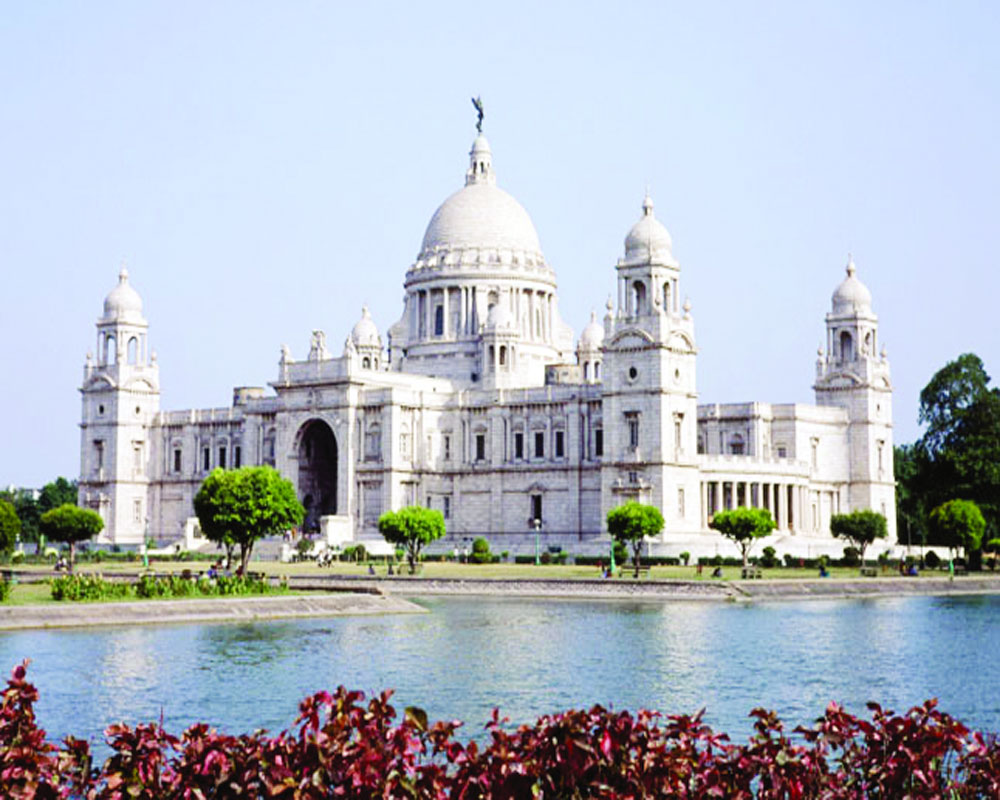 This book offers insights into a chapter of Calcutta’s history that is frightening and inspiring at the same time. David Lockwood takes readers back to 1942 when the city was bombed by the Japanese air force. An excerpt:

December 20, 1942, was a Sunday. On that day, Calcutta’s ‘Oldest Nationalist Daily’ (according to the masthead), the Amrita Bazar Patrika, reported that in Burma there was a possibility of ‘the end of defensive warfare on this frontier [by the Allies] and the beginning of a war of attack.’ Meanwhile, in the Don-Volga area, ‘the Soviet ring is drawing tighter around the enemy.’ Despite this optimistic note, the paper reflected evidence of wartime stringencies. The Imperial Tobacco Company appealed to its customers to accept cigarettes without packets in order to alleviate the paper shortage. The Government denied a shortage of rice. Women were told that they were ‘the Inner Wall of Defence’ and as such they should join the Women’s Auxiliary Corps (India). Indian political problems were also evident in the shape of the continuing Quit India campaign. An attack on a police station, bombs in Baroda and acid attacks on the police were reported.

The Calcutta races, however, went ahead as normal and were graced by the presence of the Marchioness of Linlithgow, His Excellency the Governor of Bengal, and Lady Mary Herbert. There was cricket on Saturday and Sunday and a tennis carnival to look forward to on Thursday. Cinemas catering to English speakers were featuring Chaplin in Goldrush, Robert Taylor in Her Cardboard Lover, and Abbott and Costello in Pardon My Sarong. The paper reported an increase in the production of Indian films for ‘the surging crowds during yuletide hungry for entertainment.’

That night Calcutta was bombed by the Japanese air force. The structural damage was minimal, but the panic that ensued was widespread. Large numbers of Calcutta residents fled. Fear was exacerbated by indications that neither the Government of India nor the Government of Bengal nor the Calcutta municipality were prepared for the defence of the city.

The air raid took place in a context of overwhelming Japanese military success and territorial expansion. The British — the assumed defenders of India — had been pushed out of Malaya, Singapore, Hong Kong and Burma. In late 1942, it was widely expected, in India and beyond, that a Japanese move into northern India was inevitable, imminent—and perhaps unstoppable.

Calcutta served as an industrial centre, a port and a transit point for troops moving up to fight the Japanese in Malaya and then in Burma. It was a city of considerable strategic importance to the Allies. Once Burma fell, Calcutta was the mainstay of the Allies’ Asian front. Consequently, it was a Japanese target. As Prasad points out, ‘Their air force was also well poised…to inflict continuous and heavy raids on Calcutta and the industrial area in the eastern regions. The official reaction to these first raids on the city was very much along the ‘we can take it’ and ‘business as usual’ line, modelled no doubt on the (officially) stoic British reaction to the Blitz. The Governor of Bengal, Sir John Herbert, telegrammed the Viceroy after the first raid that despite two deaths and fourteen injuries, there had been ‘No noticeable effect on morale.’ Later the Chief Secretary related that ‘ARP Services are in general reported to have done excellent work,’ demonstrated by the fact that ‘defections were very few.’ The Viceroy was moved to tell Calcutta’s citizens:

Yours is the first capital city in India to suffer in this war a baptism of fire and her citizens have provided an admirable example of steadiness and fortitude. Well done Calcutta.

The English press was, if anything, even more relaxed. The European-owned Statesman declared that the first raid was ‘a small affair and, if the city has to be raided, it can be described as a very suitable introduction.’ Even the Amrita Bazar Patrika reported that ‘Little damage was done and no nervousness was shown by the townspeople.’

Down amongst the townspeople, however, things were not quite so sanguine. After the first raid, ‘nervousness’ broke out on a wide scale. According to Joydeep Sircar, the raid was a ‘devastating blow to the morale of the inhabitants.’ Sircar suggests that ‘one and-a-half million people’ fled, causing a breakdown in ‘the civil services.’  There was a widespread feeling that ‘The Government had not prepared for the eventuality and seemed overwhelmed by developments in Southeast Asia.’

In the ensuing days and weeks, some signs of defence began to appear: A number of Hurricane aircraft were moved to Calcutta; emergency airfields were constructed, including one in the centre of the city between Chowringhee and the Maidan; slit trenches were dug in the same area. But following the December 1942 raids, many of Calcutta’s citizens were not concerned with defence. They were more interested in flight.

On December 23, Governor Herbert reported to the Viceroy that there had been a ‘considerable exodus of people from Calcutta though not yet amounting to a panic rush.’ Workers had ‘wholly disappeared from the dock area’ and morale was deteriorating — though ‘nothing like a landslide’. The post-bombing exodus took up the full capacity of the railways. Special trains were laid on to cope with the numbers attempting to leave the city. On December 27, ‘measures were taken to clear crowds of refugees collected at railway stations along the evacuation routes.’ The British authorities estimated that some 2,50,000 people left the city by road and another 1,00,000 by rail. Katyun Randhawa, a Calcutta schoolgirl, remembered the exodus and the railway stations ‘packed with people trying to get out’—some permanently. ‘Some of our street hawkers also disappeared,’ she relates, ‘—we never saw our bread delivery man again.’

Not unnaturally, those who felt the most vulnerable —from working-class suburbs, industrial establishments and around the docks — were those most inclined to leave. The Bengal Government Labour Commissioner put a brave face on the situation on the Monday morning after the first raid: ‘There was full attendance this morning in mills and in engineering firms. In fact, some engineering firms reported better attendance than on normal Monday mornings.’ The docks presented a different picture. The Chief Secretary reported that boatmen, port employees and contract labour (including coal coolies) all evacuated. Workers from outside Calcutta ‘left in large numbers on foot both by way of the Grand Trunk Road and the Orissa Trunk Road.’ He estimated their number at 2–3,00,000. Severe labour shortages ensued. The workers that remained took the opportunity of pressing their demands on the employers. There was an increase in strikes in Calcutta after the raids. The Australian war correspondent, Wilfred Burchett, was present in the Calcutta Port Commissioner’s office after one of the December raids, when the latter was confronted by a deputation of wharf labourers. They told him:

We don’t mind staying and working, even if they do bomb us, but we want food in our bellies and decent shelters. At present we’ve got neither.

The Scavengers’ Union demanded wage increases and free accommodation as ‘a large number of sweepers had already left the city and many would go away in the near future.’ The wharf labourers’ demand for shelters reflected, again, the feeling in the city and in the province—and perhaps across India as a whole—that the Government had not prepared well enough for the possibility of war and was not doing enough about it now that it had arrived. In the aftermath of the raids, Sudata Debchaudhury argues, ‘[t]he Government had practically collapsed.’ This may be overstating the case, but at the time the Amrita Bazar Patrika was complaining that the Government of Bengal had done nothing to organise an orderly evacuation, or to provide the evacuees with alternative means of livelihood, shelter and conveyance. Confidence in the authorities could not have been strengthened by the fact that during the December raids about 10 per cent of ‘the lower ranks of the Calcutta Police’ themselves abandoned their posts and fled.

Widespread fear of air raids and even invasion had taken hold in India well before December 1942, and this laid the basis for the civilian exodus from Calcutta. In the early part of the year, the example of Burma was there for all to contemplate. The Government should have known what to expect. On the basis of Burma’s experience of attack from the air, the Government of India’s Civil Defence Department sent out a circular, Lessons learned during air raids, to all Provincial Governments in August 1942.