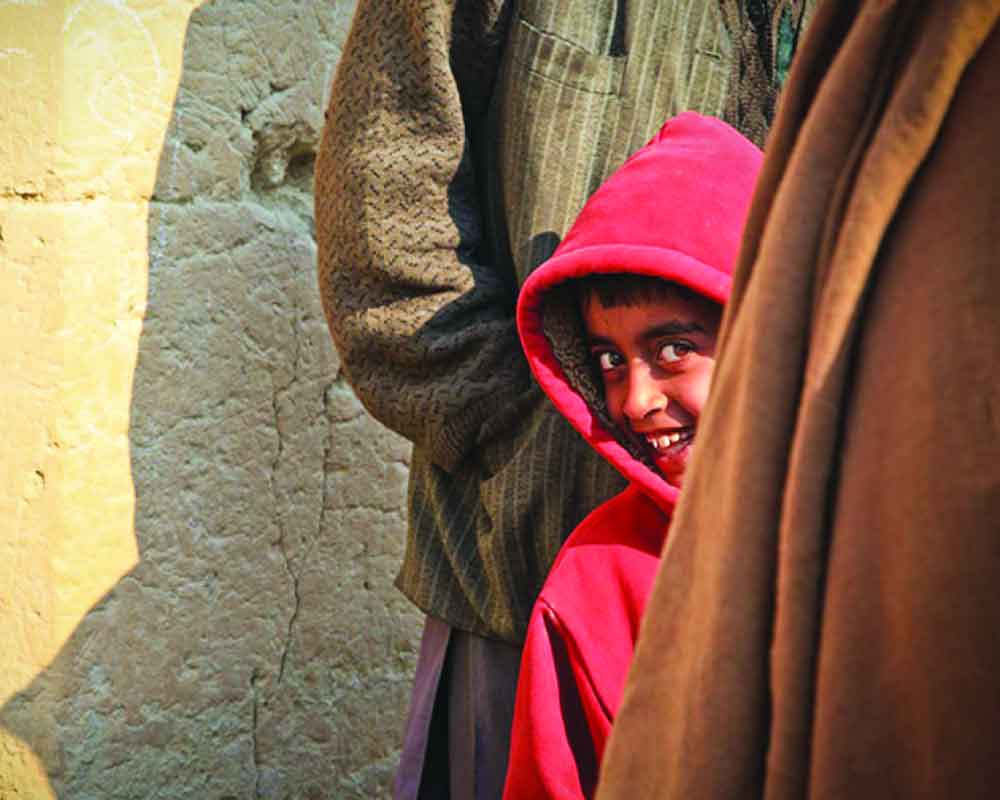 To give without expecting anything in return brings us the biggest satisfaction and instills a sense of involvement in society, writes Ratna Vira, as she shares how deeply altruism is embedded in India

The heart is a powerful metaphor, evoking emotional and psychological well-being, showing caring and compassion. Repeated instances of altruistic behaviour, of continuing charity, are evidence that people still feel their heart as a representation of their self, of the emotional self, which cannot be reduced to materialistic, biological terms. According to Hinduism, the heart is the connecting link between the heaven and the earth. It was the place of Brahman, the supreme cosmic spirit. While details of the brain were unknown in the early Vedic period, thoughts and emotions, and consciousness itself, came from the mind. The ultimate desire was to become one with Brahman and that could come about through connecting your heart to the heart of Brahman through duty, service, sacrifice, devotion, and charity.

Charity, generosity and specifically the giving of alms are regarded as virtuous in most Indian philosophies and religions. Daana, a Sanskrit/Pali word denoting charity and giving, came from the heart. Daana traces its roots to Vedic traditions and can take the form of helping individuals in need, or in the wider form of helping many through public works and philanthropy. Traditionally, Daana implied the relinquishment or giving up of something that was one’s own to help someone without expecting anything in return. Related but not as powerful were the concepts of Paropkara (benevolent deeds), Dakshina (gift or fee to Guru or someone else), and Bhiksha (alms). Daana was usually given to a person or a small group, but the concept also encompassed wider charitable projects with public benefits. Popular projects included sarais (rest houses), schools and care home, provision of drinking water, and the planting of trees.

The Upanishads (500 BCE) contained some of the earliest discussions of Daana. In the Brihadaranyaka Upanishad, the three characteristics of a good, developed person are defined as self-restraint, compassion or love for all sentient life, and charity (Daana). Centuries later, the Bhagavad Gita gave a more practical definition of Daana, charity, in action. There were right and wrong forms of Daana. The good, enlightened charity was given without expectation of return. But it was also to be given at the proper time and place, and to a worthy person. Ego-centric charity was one given with the expectation of some return or given grudgingly. The worst form of charity was that which was given to an unworthy person or at a wrong place and time.

The Mahabharata finds repeated mention of the ‘worthy person factor’ in determining the value of charity. Vidur, a great scholar and the half-brother of the King Dhitarashtra, had lengthy conversations with the King about policies and governance. The Vidur Niti, the oral record passed through generations of the conversations, specifically mentions misused charity and poor utilisation of wealth. Money was misused if charity were given to the unworthy or if it were denied to the worthy. A stone tied to the neck and being thrown in water was the reward offered for misused charity. Worth of the recipient and timing of the charity were as important as the mere giving.

In a more cynical and brutal world, newspaper headlines no longer stun us. Our apathy is so strong that stories of rape, murder or cheating no longer move us. Ponzi schemes bankrupt families, farmers commit suicide. Millionaires are made, and some led to prison. ‘Karma,’ we mutter ‘catching up’.

Ingenuous ways to multiply and quadruple wealth and dodge tax are revealed daily. All the while, the same people are seen supporting the latest causes, visiting houses of prayer, and washing their sins through giving. Is this truly charity? Is it altruism or merely selfish behaviour?

Compassion and emotion are passé. We live in the digital age surrounded by millennials who use Emojis and Instagram to express themselves, and with them most of us are forgetting life as we once knew it. We believe that Facebook and WhatsApp are free. What we are just beginning to realise is that in using them, we have begun to give up our freedom. In wanting to be connected all the time, our loneliness gets amplified.

However, money does not seem to be the glue that binds people together. In a series on the lives of the super-rich on the History Channel, it was observed that they had the same insecurities as those with very little. Beyond a point, the wealth which is meant to give happiness morphs into something else instead of protecting the individual from the hardships of life, it often is the reason that the person needs protection. What does remain, however, is the echo of our actions. Do good without the sword of karma hanging over you but because you have a heart that beats with compassion. But not everyone believes that sharing what one has is good. The ability to give does not mean the same thing as the propensity to give; this is a basic human characteristic.

India is a poor country where the disparity between the rich and the poor is stark. We are a developing nation with third world problems, but greed and apathy drive the so-called developed nations as much as anywhere else. Researchers have found the dominant belief in India to be that social development in society is either for local communities and families to handle, or else a task for government to do. Altruistic giving for the love of humanity is said to be one of mankind’s noblest instincts. This instinct is not intrinsic to our molecular biology and is a socially acquired trait, which has resulted in humans being cognitive vastly different to other animals on the planet.

There is a difference, important for India, between charity, philanthropy and social investment. Charity is the voluntary giving of money to those in need, where the motive is compassion and the desire is to as immediately as possible, relieve distress. Philanthropy is for the transformation of society, where there is long-term planning by the altruist to identify, tackle and cure the ills of society. Philanthropy has a wider societal purpose than charity, which is more immediately ameliorative. Indian philanthropy and charity, while lower than the proportionate GDP share as compared with Western countries, is better than many of our neighbours. The mix of giving, however, and the causes for which it is given do differ, as we also see in the vast differences between giving in the United States and Britain.

Whatever be the means of giving and the type of altruism a person might want, it seems important to be ‘intentional’ in one’s giving. Knowing who would like to give to is important; otherwise we run around doing good, but not doing right. Just because something sounds like it is a good idea, does not make it so. Each person who wants to help needs to identify the different spheres of relationships (and specific people who are in those spheres) whom they wish to help.

Giving is made easier if you have information about what and how the money will be used by the organisation you give to. The importance of informed giving cannot be over-stressed. There are two reasons why a donor might give to a charity. Firstly, the charity might be fulfilling the donor’s own desires and wishes. Secondly, the charities themselves might have causes that they support and they active fundraise from donors for these causes. In general, it is seen that donors who give regularly are highly influenced by prior knowledge of or affiliation with a charity and are unlikely to respond to random advocacy or solicitation. Prior knowledge and good communication of its works and impact are highly desirable for a charitable organisation.

And finally, the most important question to answer for altruists is what it means to have “impact” and why it matters. This is a difficult question to answer for different people will have different definitions of impact. How to make a difference is a matter of your personal philosophy. For some people, this may mean the number of people whose lives you improve, and how much you improve them by. “Improving lives” could be thought of in terms of “increasing well-being”, treating everyone as equally valuable. Other altruists might want specific defined outcomes, and measures to ensure that those outcomes have been achieved.

Motivations, however, will differ. As we have learned, altruistic behaviour is not inherently in our genes. It has to be learned. Fortunately, our physical frailties and the powers we gained through language and the Cognitive Revolution have made us capable of societal structures and of working together. Altruism may not be in our genes, but it is very much part of what makes us human beings.

The writer is the co-author of the book, Why People Give: Interpreting Altruism, along with her daughter Suhasini Vira

Getting started as a philanthropist

You must think deeply about why you want to become a philanthropist and what you hope to achieve by giving. Do you wish to volunteer your time and expertise, do you want to donate money, or perhaps give goods in kind? It is important to realise that every philanthropic journey is different. Every motivation, every mechanism, and every interest is unique. But there are perhaps learning from others who are experienced donors or have explored philanthropy and these learning can guide you in your first steps in giving. And do remember that every contribution matters. You matter.

When you first consider giving, there are a large number of charitable causes that you may be attracted to. The causes that you care about may be local, or they may be part of a bigger, perhaps even global, issue. Some altruists initially give to a number of causes to see what makes a difference, while others want to be more focussed and strategic in their philanthropy. Therefore, the first thing you need to do is determine your strategy and set your guidelines. How much money do you wish to give, do you want to volunteer your time, is this a one-time activity or do you wish to give repeatedly? These are some of the questions that you need to answer before you begin your journey. You may wish to begin by looking at causes and issues that you are most passionate about. Also determine what you would not like to give for, which is equally important.

Next, do your research. There are three possible starting places. The first could be to pick a local charity, where you can personally visit and meet the people involved, remain associated with, and build a connect over time. Reach out, as most NGOs will welcome your support.

A second approach is to look within your immediate set of connections and spread the word that you are looking for a reliable organisation working within the cause or field that you have chosen. The word-of-mouth references you receive may broaden the possible impact you may have. Thirdly, you may wish to give to reputed organisations that aggregate the donations and thereby create greater possible impact. Organisations such as GiveIndia, the Charities Aid Foundation and Dasra (among others) are platforms that aggregate donations, provide ways for you to give in a convenient way, conduct due diligence on the grants they make to non-profit organisations, and give feedback through impact assessment studies. These are reliable and easy ways to contribute in a manner that will increase your chance of making an impact.

Finally, remember that you should not expect a return. But staying involved with your giving can give you lasting satisfaction and enjoyment.