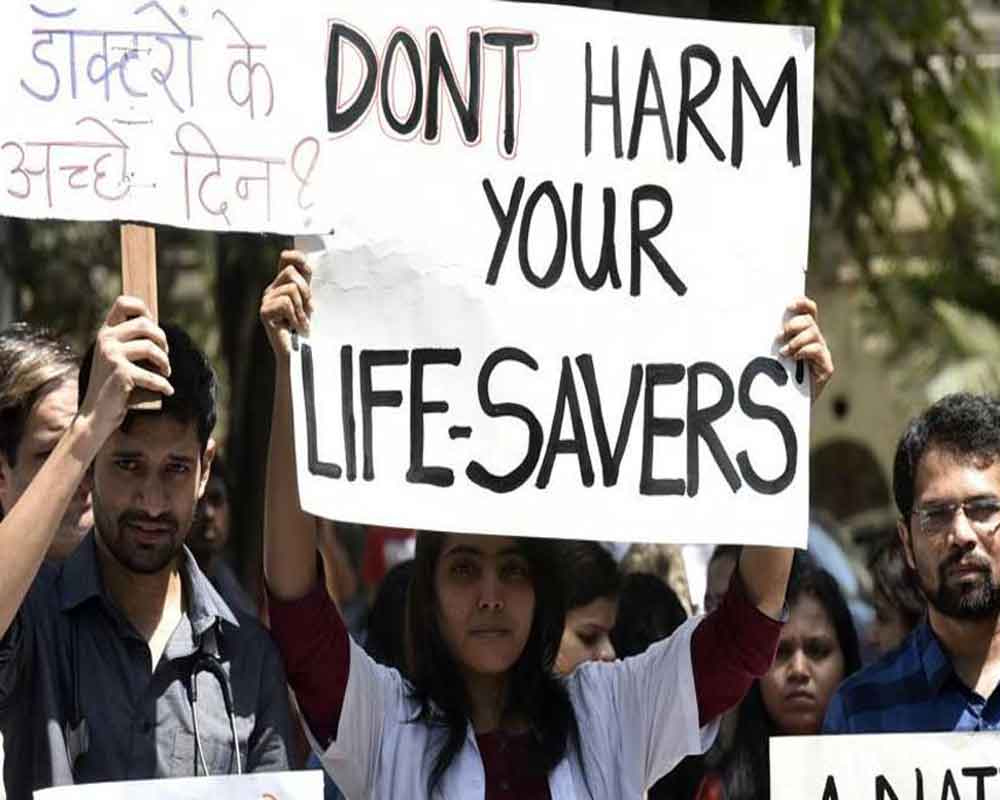 Healthcare services at government and private hospitals in the national capital will be hit on Monday as scores of doctors, including those at AIIMS, have decided to boycott work for a day in support of their striking colleagues in West Bengal.

Resident Doctors' Association of the All India Institute of Medical Sciences (AIIMS) in Delhi, which earlier decided not to join the strike, announced withdrawal of all nonessential services from noon after a junior doctor at its trauma centre was assaulted in the early hours of Monday.

The medico at the Jai Prakash Narayan Apex Trauma Centre was allegedly assaulted for "giving preferential care to a critical patient", the RDA said in a statement.

Doctors of the AIIMS also held a protest march in the campus between 8 am and 9 am. "We once again urge the West Bengal administration to fulfil the demands of the striking doctors and resolve the matter amicably at the earliest in the best interest of the general public," a statement issued by the RDA said, adding a meeting of its general body will be held at 6 pm to decide the further course of action.

The Indian Medical Association (IMA) has given the strike call with the withdrawal of nonessential health services across the country. IMA members will also stage a dharna at its headquarters here.

The apex medical body, IMA, said all outpatient departments (OPDs), routine operation theatre services and ward visits will be withdrawn for 24 hours from 6 am on Monday to 6 am Tuesday.

Emergency and casualty services will continue to function, it said.

The Delhi Medical Association (DMA) and the Federation of Resident Doctors Association (FORDA) have extended their support to the strike.

"Emergent Executive Committee Meeting convened decided to support the call given by IMA for withdrawal of non-essential services on 17th June (Monday) for 24 hours (6am to 6am) to protest against violence against doctors and hospitals. All clinics, nursing homes, diagnostic centres and hospitals are requested to shut down routine services," a statement by the DMA said.

Junior doctors in West Bengal are on strike since June 11 after two of their colleagues were attacked and seriously injured allegedly by relatives of a patient who died at the NRS Medical College and Hospital in Kolkata.

In a show of solidarity, medical practitioners across the country have chose not to work, leaving patients in the lurch.

The apex medical body, IMA, has demanded a comprehensive central law in dealing with violence on doctors and healthcare staff.

Security measures and the determinants leading to violence should also be addressed, it said in a statement.

Meanwhile, the agitating doctors in West Bengal are likely to meet Chief Minister Mamata Banerjee later in the day at an auditorium adjacent to the state secretariat in Howrah, and work out ways to resolve the impasse.