Lalu's claim that I met him to negotiate Nitish's return to Grand Alliance bogus: Kishor

Lalu's claim that I met him to negotiate Nitish's return to Grand Alliance bogus: Kishor 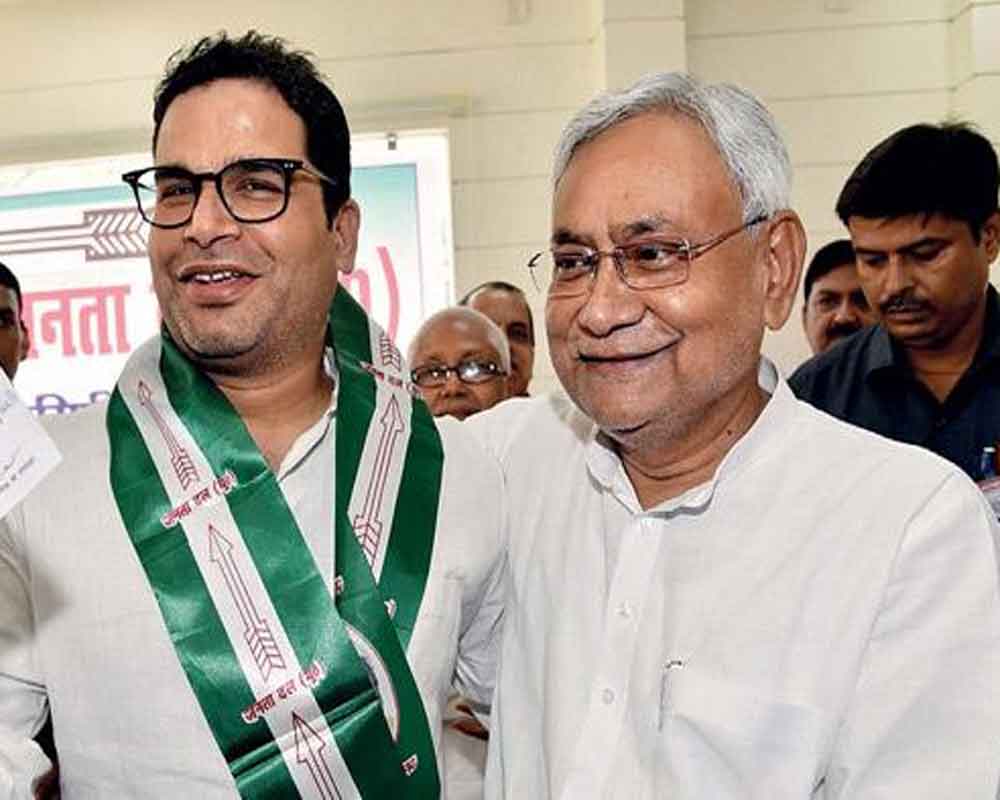 RJD supremo Lalu Prasad has reportedly claimed that Bihar Chief Minister Nitish Kumar had sent feelers through emissary Prashant Kishor for his return to "Mahagathbandhan" but the assertion was promptly dismissed as "bogus" by the poll strategist-turned-politician".

Reacting to an excerpt of the soon-to-be-released autobiography of Prasad, Kishor - currently the JD(U) national vice-president - tweeted, "The claims made by Laluji as reported are bogus. This is nothing but a poor attempt (at) seeking relevance by a leader whose best days are behind him.

"Yes, we did meet many times before I joined JD(U), but if I were to tell what all was discussed then he would be quite embarrassed".

Kishor, who had worked with Kumar and Prasad as a strategist during 2015 assembly polls, also shared the excerpt published in an English daily which quoted the RJD supremo as having said, "Kishor seemed to indicate that if I were to assure in writing my party's support to the JD(U), the latter would pull out of the BJP alliance and rejoin Mahagathbandhan.

"Though I was not bitter with Nitish, I had lost trust in him completely. Moreover, I was not sure how the people who had voted for the Grand Alliance in 2015 and the other parties that had united against the BJP all over the country, would react if I accepted Kishor's offer," the report quoted Prasad as having said in the book.

Kumar had severed his ties with the Grand Alliance in July, 2017, less than two years after his partnership with arch rival Prasad and the Congress succeeded in delivering a crushing defeat to the BJP-led NDA in the assembly polls.

The chief minister, who was apparently embarrassed after his then deputy and Lalu Prasad's younger son got embroiled in a corruption scandal, announced his resignation in a sudden development that he attributed to his "inner voice" but ended up getting sworn in as chief minister less than 24 hours later as the BJP and its allies came forward with offer of support.

There had been speculations last year, especially in the aftermath of a spate of communal incidents that erupted around the Ram Navami festival in several parts of the state, that the JD(U) president was getting uneasy with his old ally's new, aggressive avatar and thinking of a return to the "Mahagathbandhan" - a term he had himself coined.

Meanwhile, former JD(U) president Sharad Yadav, who fell out with Kumar over his return to the NDA and ended up fighting the Lok Sabha polls as an RJD candidate, also sought to approve the claim made in the excerpt published in the English daily.

"It is true that Nitish Kumar had desperately tried to walk out of NDA within months of returning to the BJP-led coalition. Negotiations were on through various channels. Kishor may have been involved," Yadav told reporters in Madhepura.

JD(U) spokesman Rajiv Ranjan said, "Kishor is also a strategist who meets a vast cross-section of people in that capacity. He worked with Nitish and Lalu as a strategist in 2015 and may have been in touch with the RJD boss afterwards, but not for the reasons stated by the jailed leader."

Notably, in a recently telecast interview to a news channel, Kumar too had spoken of Kishor's close acquaintance with political figures of all hues and remarked "even Lalu speaks to him from jail. It may be against the rules but he does that".