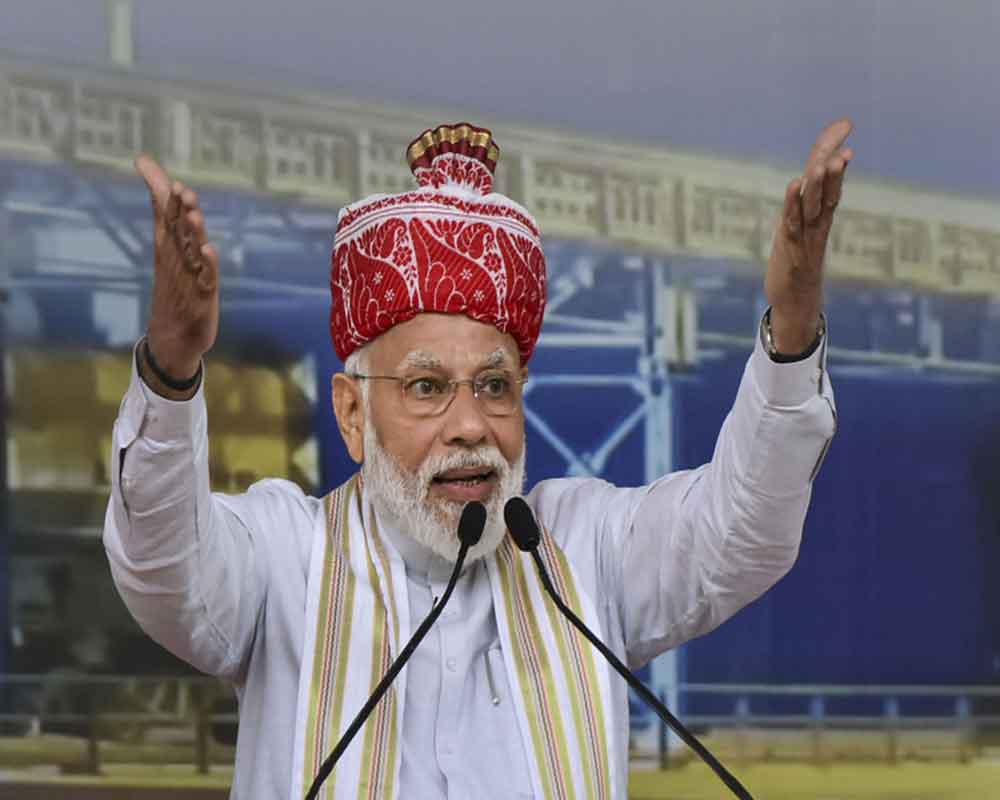 Prime Minister Narendra Modi Thursday said the NDA 2.0 governments pledge is to rein in corruption, terrorism and take union territories in Jammu and Kashmir to height of development and asserted the country has seen the "trailer" of the fast functioning of his ministry within the first 100 days and the entire "film still remains to be seen".

In a dig at former Union Home Minister P Chidambaram, Modi said earlier some people thought they were above law and courts, but his governments commitment and pledge is to control corruption.

"Those who thought they are above law and above courts of the country are now approaching courts praying bail; some people have already gone inside (jail) which is their rightful placedevelopment is our pledge and commitment; never has the country has seen such acceleration in development," Modi said addressing a public meeting at Prabhat Tara maidan now renamed as Jagannath maidan here.

Chidambaram is lodged in Tihar jail in connection with the INX media case.

"The country has just seen the 'trailer' of the fast functioning of the government within hundred days and the entire 'film still remains to be seen'," he said.

The Prime Minister reiterated his commitment to securing the dignity of muslim citing the passing of the triple talaq bill in the first session of Parliament in Modi 2.0.

Talking about the two newly formed Union Territories, Modi said, "We aim to bring about development in J&K and Ladakh, the work for which has begun in the first 100 days of NDA 2.0."

He also referred to how Jharkhand earlier lacked transparency and witnessed scams, but Chief Minister Raghubar Das made efforts to bring transparency in the last nearly five years.

The PM's words of praise of his party government comes ahead of the state assembly election in Jharkhand later this year.

Reeling out figures related to different welfare projects launched by the government, he said 44 lakh people availed benefits under the Ayushman Bharat health insurance scheme in the last one year in the country.

The world's largest health assurance scheme was started by the PM from Jharkhand last year.

More than two crore houses were constructed under Pradhan Mantri Awas Yozana and two crore more houses are under construction in the country, besides constructing 10 crore toilets and giving free LPG connections to eight crore beneficiaries under Ujjwala Yozana, he said.

Inaugurating and launching a plethora of schemes, Modi said Jharkhand will get a new identity through the Multi-Modal Terminal at Sahibganj, which will connect Bangladesh, Nepal and the North-East areas.

The prime minister said that pension schemes for the people working in the unorganized sector, farming and small trading units have been introduced.

The government will spend Rs one lakh every year on the tribal students education, he said.

The prime minister also inaugurated a new building of the Assembly and a multi-modal cargo terminal, which is expected to ease transportation in the region.

After its bifurcation from Bihar in 2000, the tribal dominated state of Jharkhand will now have its own well- equipped assembly building to carry out legislative functions.

The three-storey building has been constructed at a cost of Rs 465 crore.

It is dubbed as the first paperless Assembly in the country.

Modi dedicated "Pradhan Mantri Kisan Maan Dhan Yojana" that will help small and marginal farmers by providing a minimum pension of Rs 3000 per month, on attaining the age of 60 years.

Farmers who are currently between 18 and 40 years of age can apply for the scheme.

Another 'Swarojgar' pension scheme was also rolled out for self-employed persons.

Under both the schemes, beneficiaries between 18 and 40 years will get Rs 3,000 per month after completing 60 years of age.

The cargo terminal, which was inaugurated online by the prime minister from here, has been built by Inland Waterways Authority of India on River Ganga at Sahibganj.

It has a cargo storing capacity of 30 lakh tonne per year, a stockyard and parking and berthing space for two vessels.

PM Modi laid the foundation stones online for 462 Eklavya Model Schools across the country, of which 69 will be established in 13 of Jharkhand's 24 districts.

The foundation for a new building of Jharkhand Secretariat was also laid by the prime minister.

The new secretariat building in the state capital will come up at an estimated cost of Rs 1238.92 crore.