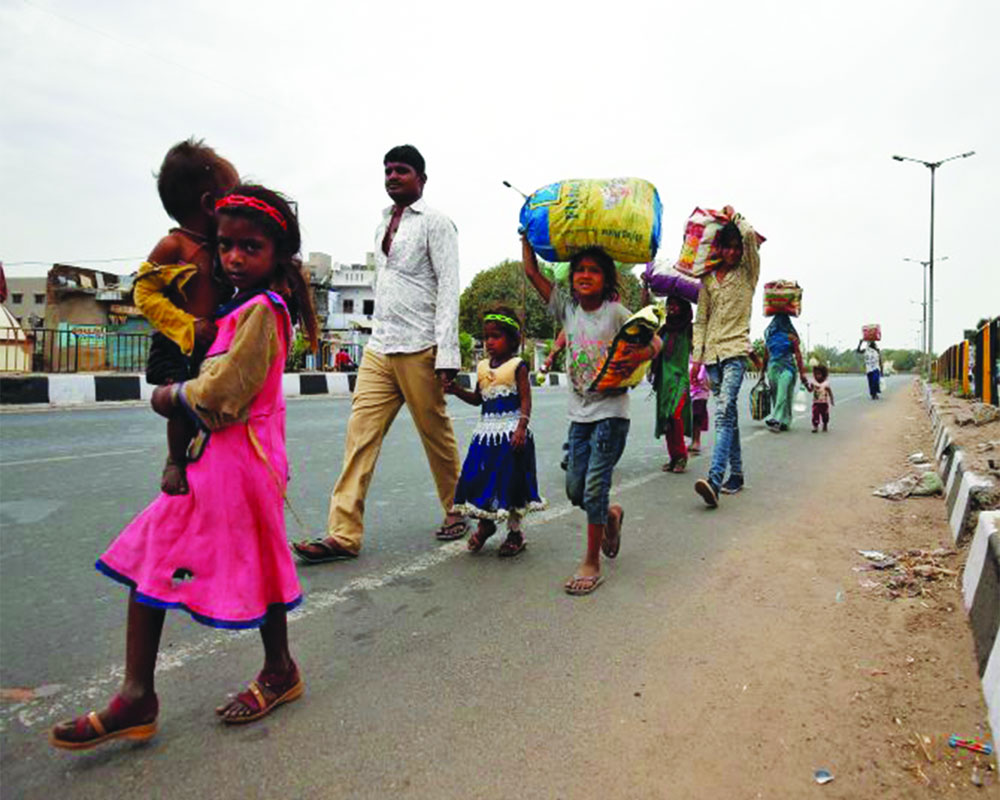 Amid the prevailing lockdown, the afflictions of migrant labourers are being compounded during their long trek home and some are being beaten up and tortured by police

If the pitiful sight of a father walking with his ten-month-old infant on his shoulders, for over 100 km in this heat to reach his hometown, does not shake us, then it raises serious doubts about humanity and its future. If the death of a 38-year-old worker after walking for 200 km and the predicament of tens of thousands of jobless, shelterless, hungry, thirsty and helpless migrant workers yearning to return to their villages amid the rapidly proliferating Coronavirus outbreak and the resultant countrywide lockdown, does not receive our empathy, then humanity’s opportunism is well-established.

Amid the prevailing threat of the contagion, the afflictions of the voiceless poor are being compounded and some are being beaten up, tortured, made to do sit-ups, locked up in overcrowded makeshift prisons, while others are being punished through other “innovative” ideas of violence, by those who are supposed to protect the people, the police.

If the authorities have become thankless to the extent that they have forgotten the contribution of informal workers towards the growth of the economy, here are some insights: India’s labour market is dominated by informal employment and constitutes 90 per cent of the total workers involved. Out of the total 47.1 crore workers in 2017-18, the number of informal workers stood at 42.4 crore. They contributed almost 50 per cent to the national income as per a Confederation of Indian Industries’ report.

The rise in urbanisation is a consequence of demographic explosion and poverty-induced rural-urban migration. As per the estimates of the Economic Survey, 2017, the magnitude of inter-State migration in India was 90 lakh annually between 2011 to 2016, while total internal migration was about 13.9 core. If this trend continues, the total number of migrants would be around 21.1 crore by 2020-end. Uttar Pradesh (UP) and Bihar are the two biggest source States, closely followed by Madhya Pradesh, Punjab, Rajasthan, Uttarakhand, West Bengal and the Union Territory of Jammu and Kashmir. On the other hand, the main destination States are Delhi, Maharashtra, Tamil Nadu, Gujarat, Andhra Pradesh and Kerala.

Most workers had migrated in search of livelihood and were involved in low-paying informal work in urban destinations in sectors such as construction, hospitality, textiles, manufacturing, transportation, services and domestic work. Lacking any social or income security, they are not only exploited, ignored and disrespected by their employers but also by the political class, as they hardly translate into votes. With their livelihood threatened by the lockdown and future uncertainties, no wonder they are forced to tread the long road to their hometowns and villages on foot.

At this moment of crisis, coupled with their enforced alienation from the cities, they might not even know if they are also Coronavirus vectors. It can only be hoped that amid the  thousands walking alone or with families, children or lining up at shelters and bus stations, with no practical scope for social distancing, there is no one in the crowd who is infected. If it is otherwise, India would become the new epicentre of the outbreak in no time at all, thanks to our inept healthcare system and infrastructure.

Add to this forced exodus the fact that the Deen Dayal Antyodaya Yojana-(DAY-NULM), which could come to the rescue of these workers, suffers from several inherent challenges. For instance, for the last 18 months the Government has been mulling over the idea of outsourcing the upkeep of the livelihood mission to corporates and philanthropic institutions. This implicit failure of the Government that led to the generation of such an idea is further amplified by hiring big private consultants as project monitoring units, having a “corporate-style target achievement attitude.” Further, the inconsiderate approach of the authorities during times of economic slowdown, when the migrant workers are the hardest hit, is evident from the meagre increase in the budgetary allocation for DAY-NULM vis-à-vis the flagship schemes of the Ministry of Housing and Urban Affairs (MoHUA). It was Rs 750 crore (in 2019-20) and was raised by only six per cent to Rs 795 crore in 2020-21. The deep-seated contentions in DAY-NULM do not stop here. Several private players and NGOs have been roped in to carry out different implementation functions for which they have tendered huge sums of money. The irony is that these agencies are bearing the brunt of corruption in the bureaucratic system leading to deferred payments for months and years even after fulfilling their work assignments punctually. The complacency in the approach of the various projects sanctioned under DDU-NULM has remained without any independent third-party monitoring and evaluation.

Given that the Government did its best to arrange special flights across the globe to bring back well-heeled citizens, it is unfortunate that it has turned a blind eye to the plight of the migrant workers. This only represents the deep-rooted systemic contempt and neglect of the vulnerable and the poor.

Though a delayed announcement, there is no denying that the nationwide lockdown is the need of the hour. However, the decision should have been accompanied with a well-crafted draft strategy for each and every section of this diverse country. Unfortunately, as time unfolded, there was no such strategy. However, while ordering everyone to stay at home during the lockdown period, the homeless and those who would be rendered homeless by the shutting down of their sources of employment, seem to have been forgotten.

As the country is bracing for an economic bloodbath with loss of millions of jobs and scramble for food and water for survival and the impending scorching summer, these migrant workers would be the hardest hit once the infection starts to spread among them. The poverty and suffering of all those dependent upon them will increase due to the lack of a source of income. Plus, home isolation will be difficult to attain as large families live in small, closely-packed houses in areas of high population density. This will add to the burden of the already inept public healthcare system and ultimately impact the private and the public sector and hit their bottomlines and profits.

Some of the immediate steps for containing the spread of Coronavirus and saving the lives of informal workers are as follows. The administration must work with various State Governments to arrange district-wise special sanitised trains and buses to send the workers to their respective homes. These means of transport must be equipped with non-perishable food items and water for the passengers.

A pre-boarding health check-up must be done and those showing any COVID-19 symptoms must be prohibited from travelling and referred to the nearest Government hospital.

If the transport cannot be organised, decent accommodation with food, water and sanitation must be arranged. The hotels, guest houses, stadiums, expo centres and so on must be made available. At present, nobody is using them anyways.

Devise and implement an immediate monetary compensation plan through cash and direct incentives for the circular and seasonal migrant workers who have lost their jobs. This must be done on an urgent basis by at least tripling the budgetary allocation of DDU-NULM and immediate transfers. Expand the DDU-NULM component of Shelter for Urban Homeless (SUH) to meet the decent space and shelter requirements along with catering to the shelter needs of women, children, the elderly, persons with disabilities; community kitchens; medical help; in-kind assistance through public distribution systems, water and toilets. This must be developed with service-level benchmarking standards to combat pandemics like COVID-19. This is not a daunting task and only requires passion and keenness of the authorities.

In light of the worsening situation due to COVID-19, information and communication technology (ICT) and research and data analytics must be harnessed and made to work in tandem with the Government on a war footing to ensure that comprehensive efforts being undertaken to test, trace, treat and combat the pandemic reach all sections of society, including the vulnerable and poor migrant workers. This approach will go a long way in ushering in BR Ambedkar’s egalitarian ethos in the country, upon which the Constitution of India rests.

To conclude, as the predictability of life is increasingly being compromised, the virtuous unity of a decisive leadership, mass cooperation and mutual trust will win the fight against the Coronavirus and flatten the curve in India. It is high time that educated Indians, those at the helm of the Government, the private sector and civil society organisations show some sensitivity and generosity and arrange for a safe transit and compulsory 14-day quarantine of migrant labourers in their respective States. Testing times like these and the brewing humanitarian crisis will either solidify the trust of the people in the Government or establish the narrative that the latter exists not for them but just to use them.