Free up the labour market

Free up the labour market 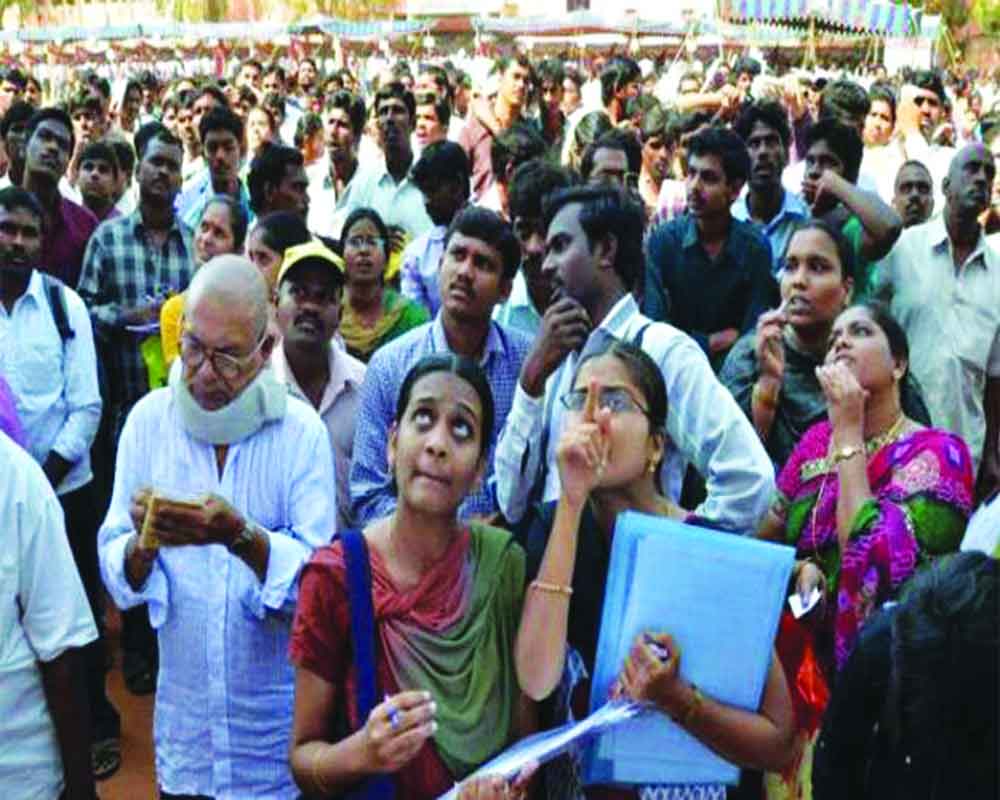 Most laws governing the country are either archaic or not in sync with present-day realities. First and foremost, there’s a need to revisit employment rules

Since 1991, a lot has been said, written and debated ad lib about liberalisation, globalisation and ease of doing business. However, not much has been said about the need to free the employment market. Discussions on a new/alternative labour laws do take place. So do talks on the need to revise minimum wages. Do we not realise that tinkering of this nature would take the economy nowhere? Time and again, Governments raise the minimum wages to seek applause. Some labour or trade union leaders do clap but that would be about it. Such moves do not increase employment. If anything paradoxically, they bring down wages.

The Industrial Disputes Act, 1947, has been the guiding code of all employment, except for the uppermost layer of officers and executives. When the Act was passed, it was intended essentially for workers by the then Government. Because of the low salaries prevailing then, clerical staff got included. In the absence of any other guidelines, the situation has degenerated to the extent that any employee can file a suit in a labour court. As a result, every responsible employer thinks not twice but thrice before making appointments at Class II, III or IV levels. As far as the number of jobs is concerned, it is these categories that are critical. Employers, up to a point, take shelter in outsourcing. However, such proxy appointments can hardly be a help in generating jobs on a national scale.

Prima facie, unions are meant to protect and promote the welfare of their member workers. As it happens, most unions are affiliated to one political party or the other. Their leaders have political ambitions. In the bargain, the priority of their loyalty may be the party. Moreover, fundamentally, the strength of a trade union lies in the number of its members; their welfare is a lower priority. Further, the concept of the worker’s union is traced to the desire for revolution; aid and abet to bring down bourgeois institutions.

A paradox of the Indian scenario is its high population and, hence, the consolation of a demographic dividend on the one hand, and minimum wages declared by State Governments plus the laws and labour courts being prejudiced against employers. The other paradox is the national outcry for more jobs. None of the points we have made so far help achieve greater employment. If anything, they actually shrink the prospects for employment.

Three years ago, a Morgan Stanley report had stated that India’s labour laws force firms either to remain small, employing fewer workers or to use capital-intensive technology. No wonder, the share of India’s manufacturing sector in GDP terms is one of the lowest among emerging markets. India’s track record in creating productive jobs has been poor.

How can there be any productive job growth if the country’s labour market is shackled with regulations made 60 or 70 years ago? Another factor so far overlooked is that work itself is a training as well as experience. Even if a youngster has missed sufficient schooling, his early start in a job can offset the disadvantage to a significant extent. On the other hand, if he/she has to be without work for several years, he/she would lose self confidence, learn little and lack experience, which is a springboard for building a career, however humble. An idle mind is a devil’s workshop is an old truism. The imposition of a minimum wage ignores this old wisdom. In assuring one person with a comfortable wage, it ruins up to nine potential careers. These nine include those who remain jobless merely because the minimum wage stifles the growth of the economy.

There was a time when an unemployed person could live off his family, which in turn depended on farming its land. But now, with increased population and a reduction in the size of most farms, this alternative for a man without a job or income is no longer there; it would be difficult to survive. Therefore, some income is a must. A low wage is better than no wage. The flip side of this situation should be an encouragement to entrepreneurs. Demand for handmade goods, especially in the affluent world, is believed to be limitless, provided it is not too expensive.

Labour law is a concurrent subject under the Indian Constitution. Thus, both the Central and State Governments have the right to formulate laws on the subject, which means multiplicity of laws, at times with overlapping jurisdictions.

For example, there are 44 Central laws and about 160 State laws on the issue of labour (source: ILO, 2013). Most are archaic, dating to pre-independence era. There is an urgent need to overhaul these laws to attune them to present realities. There are multiple laws governing a single area. For instance, there are 19 laws governing conditions of work and industrial relations, 14 laws on social security and labour welfare, among others.

It is, therefore, advisable to scrap all these laws, including the Industrial Disputes Act. In their place, a worker contract Bill should be passed, which would be between an employer and an employee, as per their mutually agreeable wishes, including the salary/wage. The only universal condition should be that 25 per cent of this salary should be handed over as a draft of a public sector bank, payable exactly five years later. These drafts, month by month, would be the employee’s post-employment benefits. This is to assure him/her that even if the employer closes down, the benefits are safe. Otherwise, there should be total freedom, which would enable numerous projects, especially labour-intensive, to mushroom and bloom.