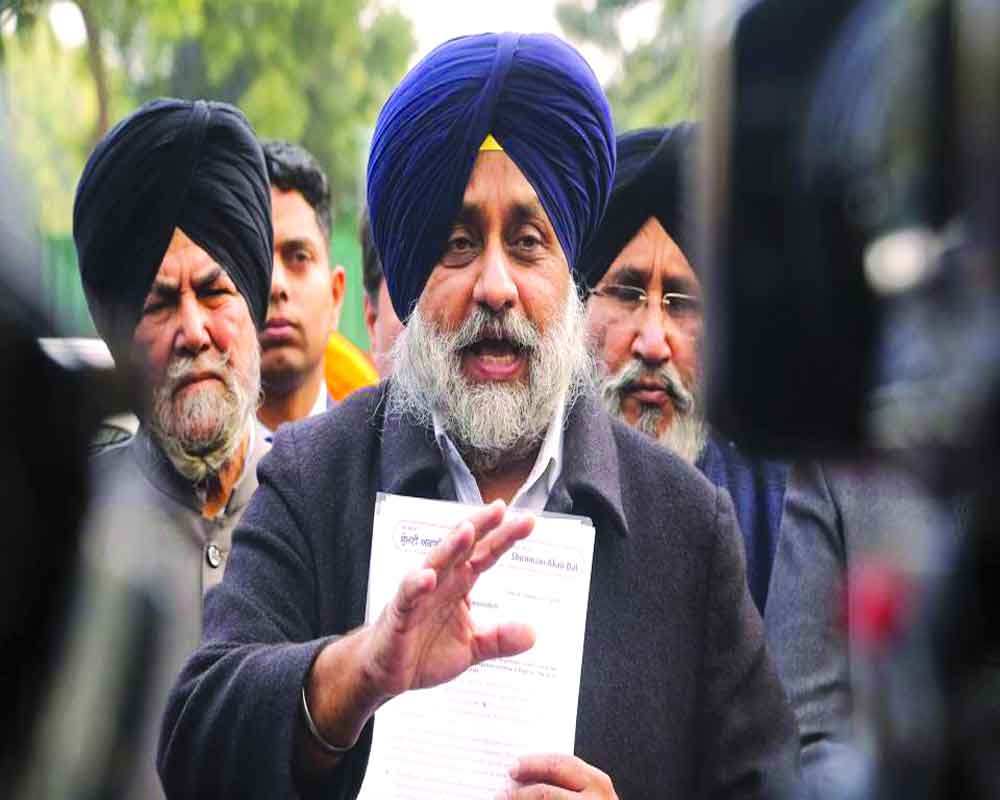 Slighted by the BJP over seats, the Akali Dal and Dushyant Chautala refuse to contest Delhi polls

The allies are proving to be an itch again for the BJP in the run-up to the Delhi Assembly elections and though it may not be betting big on them, the mutual differences are worsening its arrogant and abrasive image. The Shiromani Akali Dal (SAD), its long-time ally, which was hoping to context six seats, has now decided to withdraw from the race altogether, citing irreconcilable differences on several issues, primary among them being the Citizenship Amendment Act (CAA). The SAD is dead against the religion-based conditionality in the new law and wants all minority communities (some Ahmadiyyas are in Punjab) to be included. Besides, the BJP was pushing it to contest under the lotus symbol, clearly intended to subsume federal parties under its umbrella than that of the National Democratic Alliance (NDA). Ever since the Akali leadership has passed into the hands of Sukhbir Singh Badal and the SAD has been pushed down the ladder of political dominance in Punjab, it has slowly and steadily been asserting its independence. By choosing to end the alliance in Delhi, it hopes to douse the fire of criticism in Punjab that it is now being guided by the Hindutva ideology and supporting contentious issues like the abrogation of Article 370 and CAA without looking at the bigger picture. Its core constituency feels these issues serve a predominantly Hindu voterbase and do not find much resonance among Sikhs, who have been shortchanged. This has become more pronounced after the Akal Takht jathedar, Giani Harpreet Singh, publicly lambasted Hindutva, going so far out as to seeking a ban on the Rashtriya Swayamsewak Sangh (RSS).

Already Congress Chief Minister Amarinder Singh, by passing an Assembly resolution against the CAA, has pushed the Akalis into a corner. As for Delhi, there are around 10 lakh Sikh voters, who could potentially affect the results in about 10 of the 70 Assembly seats. Question is whether this slippage would impact the BJP vote share. Rifts between the Akali Dal and the BJP have been widening ever since the seat-sharing fiasco in the Haryana Assembly elections, with the latter attempting to poach some of its candidates. While all of these moves may seem hurtful to the coalition dharma, fact is the emaciated SAD needs the BJP’s majoritarian weight to have a stake in both Central and State politics. The BJP, post the mammoth Lok Sabha verdict of last year, is not looking to be overtly dependent on the Punjabi vote in the city. In fact, it doesn’t see too much of a community drift, arguing that the presence of the Akalis could have led to an ideology-based split. It claims the neutral Sikh vote would come its way and is, in fact, hoping to divide the Sikhs as those with Panthic loyalties and those that are non-aligned. In that sense, it is trying to undercut the Akalis. Besides, the Delhi BJP, which once thrived on the anti-Sikh riots sentiment to draw the Sikh vote towards it from the Congress and had the Punjabi Hindu vote with negotiators like Madan Lal Khurana, is now much more dependent on other community votes like the Purvanchalis while consolidating its hold among Baniyas. The shift in the power axis is apparent from the fact that the BJP has accommodated both the Janata Dal (United) and the Lok Janshakti Party (LJP), allocating three seats between them, clearly with an eye to the Bihar elections. However, both these allies are not with their fair share of troubles. JD(U) senior leader Pavan K Varma has sought “ideological clarity” over the seat-sharing with BJP in Delhi while colleague Prashant Kishor continues asking questions on CAA. Other than the SAD, the Jannayak Janata Party (JJP), the BJP’s newest ally in Haryana, will also not be contesting the Delhi elections. Led by the fiery young descendant of the Chautala clan, Dushyant Chautala, it claims it didn’t get the electoral symbols of its choice and is, therefore, withdrawing from the race. But there were murmurs of the party wanting to contest at least 12 seats. There is a sizeable Jat population that can swing the results in Najafgarh, Mundka, Mahipalpur, Mehrauli, Nangloi, Badarpur, Devli and Chhattarpur. And while Dushyant may not openly challenge the CAA, fact is he is finding it hard to justify a relationship of convenience politically. The BJP may not need the allies numerically now because it has stepped out of the pretend politics of Modi 1.0 and is gung-ho about its solo majority status. But it cannot consolidate its India map without its federal partners given its recent drubbing at the State polls. And with its oldest ideologically-friendly ally, Shiv Sena, walking out, it certainly could do without more friends turning foes and eroding popular trust in the process.