Television and its warts

Television and its warts 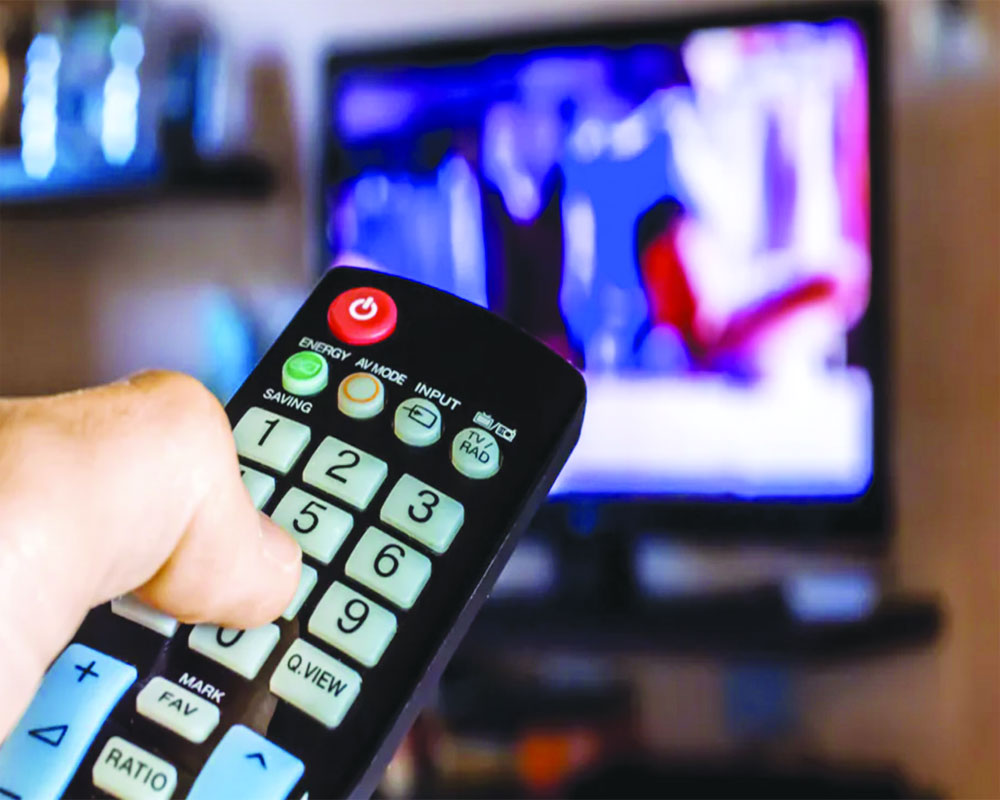 The character assassinations and defamatory campaigns, witnessed on some television channels by some anchors and reporters against individual film personalities and the Mumbai movie industry, have understandably been strongly condemned. While the public response has mainly been focussed on the campaign and its gross violation of the principles of fair play, there is a compelling need to examine the character of television itself as a medium and its impact on society.

As a medium, television combines unfolding visuals with verbal narratives, besides bringing distant events to the homes of viewers, giving them a feeling of being in the midst of an unfolding development or its aftermath, with all its sights and sounds. In contrast, radio, which provides only audio accounts, does not give the feeling of being there and seeing it all. Not surprisingly, television coverage attracts more people than radio reportage and provokes more intense public reaction than radio.

The question arises: What are the consequences of its impact? One frequently heard in the 1960s that television coverage brought the horrors of the Vietnamese War into American drawing rooms and was a major factor in triggering massive protest demonstrations and rioting, hastening the United States’ withdrawal from Vietnam. Why go so far? We are now witness to the investigations into the rape and murder of a 19-year-old girl in Hathras, Uttar Pradesh, in the aftermath of a nationwide uproar sparked principally by television reports.

Pieces in the print media — daily newspapers and magazines—have cost important people their perches. Newspaper reports have caused riots, violent demonstrations and general strikes, paralysing entire countries. This, however, was when newspapers and magazines constituted the dominant media. Now television has replaced them. This is the result not only of the pronounced edge that audio-visual reportage has over audio or print coverage, but of the fact that reports appear on television the same evening — or even earlier. An event has occurred, and by the time it is in newspapers the next morning, people already know the broad contours of what has happened.

There is, however, a fundamental difference in popular response to television and print medium coverage respectively. It lies in not just the actions they trigger but the mindsets they create. This, in turn, follows from a basic difference in the character of the two. Visual images constitute the USP of television. An image is recognised; the mental process involved in cognition. A printed word is first decoded from the combination of the letters that constitute it, and is then linked by a mental process —association — to an object or an image. The ability to associate is central to the process of rational thinking and the latter is the principal instrument in the formulation of systems of thought or critical examination of the import of events.

Cognition primarily involves visual identification. It is not an act of intelligence though it can lead to one when externally stimulated. Much depends on the nature of the stimulus. In Amusing Ourselves to Death: Public Discourse in the Age of Show Business, Neil Postman states that entertainment is “the supra-ideology of all discourse on television. No matter what is depicted and from what point of view, the overarching presumption is that it is there for our amusement and pleasure.” This is hardly surprising. A very large section of people wants entertainment. Hence programmes that entertain earn higher Target Rating Points (TRPs) than those that do not, and advertisers, who sustain media, also prefer these.

There are doubtless television channels that consciously try to tread a different path and come up with programmes that inform and promote socially and politically relevant discourse. But even their programmes have an ambience of entertainment as they are preceded, followed and punctuated by music and advertisements featuring visuals of attractive models and products in the most arresting possible settings. For example, the advertisement of a car or a motorbike often shows it in shining colours, driven by a beautiful model or her equally attractive male companion, through a picturesque landscape. People enjoy watching these, sometimes more than the programmes themselves.

This writer has no quarrel with entertainment. Life would be terribly boring without it. He also believes that each person is entitled to his/her brand of entertainment within the limits prescribed by law and a very liberal definition of decency. There is, however, a dark dimension to what is happening now. Viewers, who remain glued to television sets while some anchors, reporters and talking heads gloat over the travails of film personalities and berate them hour after hour, behave in the same manner as the crowds in ancient Rome’s Colosseum, who roared in delight as a gladiator killed another or a lion. By catering to them, the mindset that television engenders is that of wanting to be perennially and brutally entertained. The result is a progressive coarsening of sensibilities and erosion of the virtues of compassion, tolerance and a sense of fair-play.

This is the most detrimental effect of television as a medium that needs to be countered. The print media is a very different cup of tea. It is the outcome of the written culture. Alvin Gouldner states in The Dialectic of Ideology and Technology: The Origins, Grammar and Future of Ideology, that writing confers a permanence to statements that verbal articulation does not. He argues that it also confers a certain finality. A mistake made during a conversation may be corrected then and there. A printed word cannot be easily recalled for correction once widely circulated. One, therefore, carefully seeks to avoid mistakes, embarrassing statements and faulty arguments while writing. This contributes to the drafting of informed and reasoned texts.

Besides, while one can interrupt and resume a conversation, one cannot do so in a written text where one has to proceed from premise to conclusion, rationally and convincingly, step by step — a process that leads to rational articulation and critical thought.

Doubtless, written communication lacks the advantages that a speaker has at a lecture. He/she can convey a great deal through gestures, facial expressions and body movements; a listener/ viewer can also glean considerable information about the speaker and what he/she is saying and stands for. Equally, excessive focus on the speaker can distract attention from the substance of the speech. There is no such distraction when it comes to looking at a printed text. The reader can concentrate solely on the latter, absorbing its contents and reflecting on the same. Reading conduces to thought and thought spurs further thought. This fact, as well as the capacity for rational argumentation from premise to conclusion that the print medium promotes, has led to the rise of great systems of thought which have come to be known as ideologies.

That is another story. What is important now is the fact that the process of critical thinking can — and often does — mediate in a person’s internalisation of the information generated by the print medium. Given this and some other of its attributes, those associated with it have a responsibility in countering the socially and morally devastating effect of the kind of deplorable fare that some channels are churning out. The process must begin by making people aware.