The hand that rocks

The hand that rocks 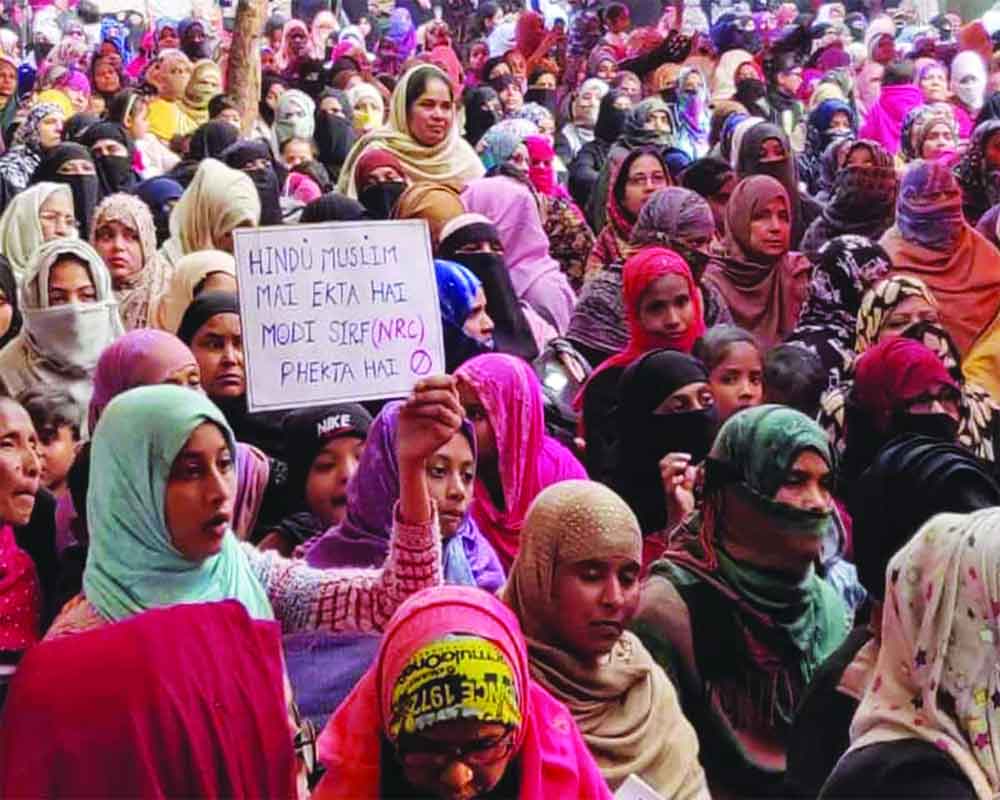 It is just another Sunday evening in Delhi, the howling cold forcing people indoors for comfort and wrapping up their energies for the week ahead. Yet in an old warehouse in Okhla, an all-women group stages a play, a dark tale about the common woman’s conflict with identity, one who finds no space to breathe amid the sorting and reordering of society that decides who she should be. What of the migrant worker, who doesn’t know where she was born or belongs, who got her to the city or not except the world that her workplace has become? Trafficked as a child, she has no paper trail, no parentage to prove why she was born. Then there’s the grass widow of Assam, whose husband has gone to the big city in search of work after their farmland was ravaged by the floods in the Brahmaputra, her ration card, the only claim to her citizenry and proof that she was married to a local, washed away by the raging waters. So left out of the National Register of Citizens (NRC), she has been torn apart from her family.  What of the orphaned factory worker, who has no memory of ancestry? These are survivors in a no woman’s land, a wilderness of the disowned, rising up to claim their dues for service to a nation that they are being told is not their own. “For years, have we not improved your lives as workers in factories and helps at home? Have you not trusted your children with us? Have we not been productive or contributed to your economy? Have we not helped you build your lives? Why throw us away now?” Rhetorical questions that trouble the audience.

The thunder of protest courses through the walls and seeps into every pore of human consciousness. Somehow it streams out all the way to Shaheen Bagh, to Seelampuri and even Prayagraj. Everyday women, having finished their chores and responsibilities for the day, are sitting on night vigils with candles and woollens — the same faces showing up like clockwork at the same time, same place and for the same time period — to fight for the safe future of their children and their right to be heard as mothers born of earth. Nurturing societies as they have known, created and healed, they won’t let them be destroyed by divisive constructs of the empire of politics or the hate virus that’s lab- grown from the databank of social and ancestry profiles. Certainly, they are shedding the patronising mantle of empowerment, like some undeserved grant or concession, and creating their own powerful narratives on their terms. And should that meet brutality, they would face it not as human shields or spoils of war but as a force majeure of all humanity. Age, education, privilege wouldn’t matter.

Women across the world are challenging the authoritarian politics of the times by leading mass grassroots movements and civil uprisings. Be it the women of Shaheen Bagh, or those in Sudan and Algeria, they have become the new face of democracy, change and peace-building in a world where all of these have become toxic or anachronistic. Why is this so? Because for all their efforts at political participation as drivers of change, women are still a minority or a marginalised lot in decision-making processes. This despite the United Nations’ vision from 20 years ago that women could anchor conflict resolution better when entrusted with leadership roles. Somewhere, this has got to do with the idea of leadership itself mutating with the bubbling up of women and the intransigence of a patriarchal order to give in. It is becoming increasingly muscular and male, qualities that are increasingly finding acceptance in a fractured world looking for direction. One that is dominated by a totalitarian control of egoistic fiefdoms and the toxic masculinity of helmsmanship. One that cannot deal with the crumbling of failing institutions and seeks solace in history, one that is lazy about finding one’s way in changed times and contexts and falls back on the protectorate of revisionism, one that chooses simplicity of binaries over the complexities of multiplicity. Simply because it is easier to follow than evolve, simply because the past is tested and the present is too risky to try out. As a “pretend democracy,” India is fast becoming an Orwellian nightmare, the State controlling every cellular aspect of national life. Be it through identity and privacy laws or through nationalism enforced with the sanctity of religion, there is a patriarchal aggression, sometimes violence, at play to keep order simply by denial of rights. That is why women are changing this paradigm by not staying within but choosing to move out and seizing the polarity that lies vacant, by embracing the oppositeness of gender as a strength, not a weakness. They also embody the contrarian discourse through their rather dramatic campaigns, the night vigils across India being a case in point.

Taking the global scenario into account, women-led movements are inclusive, non-violent, compassionate and have a 50 per cent chance of ensuring results than those led by others. They are cooptive, practical, welcoming of other subsidiary movements and can metabolise them into a larger force to spark a revolution. Women’s movements have managed to reset the agenda in Spain, Argentina, Brazil and South Korea, simply because they reflect the issues that matter to people at a structural, livelihood level rather than foisting imagined devils that hang in the air so thick and heavy, it gives you a brain fog. UN research has shown that where women are influencers rather than being a token presence, the peace processes and social stability are more lasting. And as the women of Shaheen Bagh have shown, their door-to-door access to homes has meant that they are best placed to generate a groundswell of support, irrespective of faith, propaganda or hired activism. A Sikh jatha cooked for the women of Shaheen Bagh in solidarity, simply because the community is convinced by their spontaneity and sense of justice. Theirs is an ethical integrity, one that can never be bought or intimidated. This subliminal hold as nurturers definitely lends women movements a decisive edge. And given their tenacity and discipline, women-led movements last longer and emerge as a social disruptor. Most importantly, they appeal to the youth, simply because by their resistance, they appeal to their sensibility of challenging status quo. If we pan all mass movements of 2019, we would find that women collectives, not leadership, have compelled course correction.

Narmada Bachao Andolan activist Medha Patkar had once said that women were swords, something she herself harnessed for her anti-dam agitations and ensured rehabilitation of evacuees and refugees. Visuals of women half-immersing themselves in water still form a picture of civil determination. Or remember Sundar Bahuguna’s Chipko movement, where village women encircled and hugged trees to save them from being felled by loggers and set an example for conservation much before Greta Thunberg did? This organised resistance did lead to a ban on tree-felling in Uttar Pradesh.

Women have spearheaded protests against the Kudankulam nuclear plant, where authorities wanted to set up a reactor for spent fuel, and have got a conversation going on safeguards against radioactivity for communities that live around it. And let us not forget the women survivors and descendants of the Bhopal gas tragedy, who despite getting their compensation, have not given up the campaign against exploitative practices of multinationals or the awareness drive on chemical contamination, ensuring that there is no repeat of a disaster that resulted from governmental sellouts. Women in India will no longer be content being unicorns with self-made success stories meant to be emulated and inspirational. They are going to have faith in their regular lives and take on societal irregularities by staying together.