Use the power of fungi

Use the power of fungi 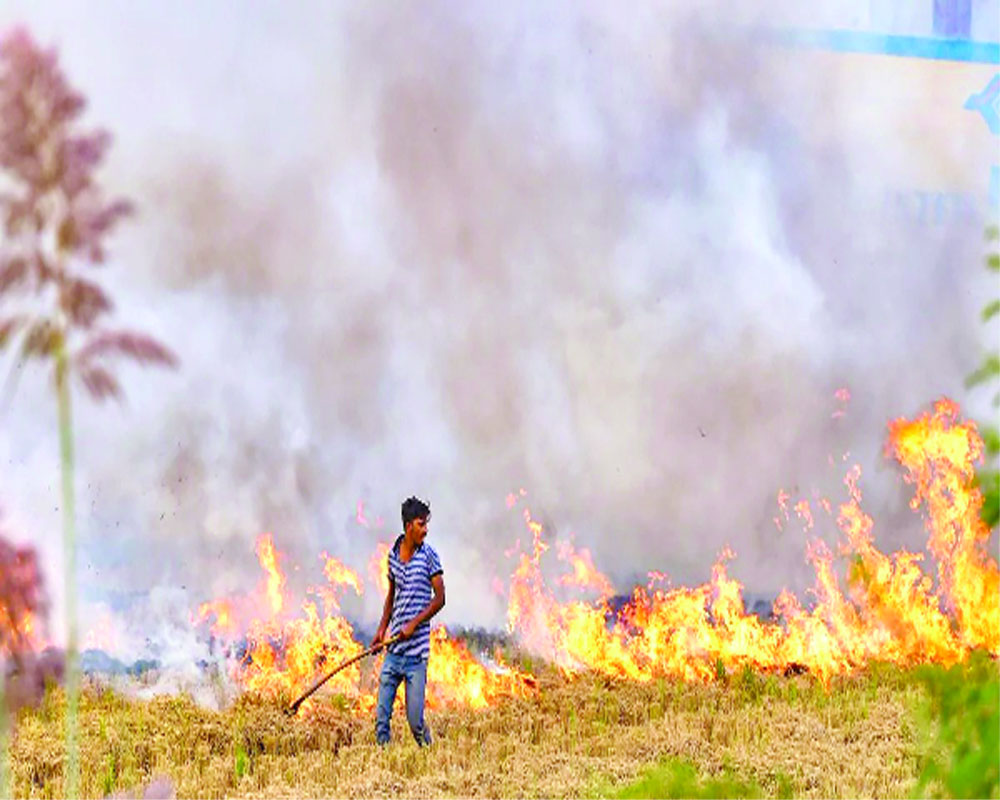 Mushrooms can be grown on paddy straw and can be the natural solution to the problem of stubble burning, falling incomes and malnutrition in Punjab

A tablespoon of dust, two squeezes of petrochemical vapour, a dash of industrial fume and a lot of stubble soot is Delhi’s favourite winter cocktail served at dawn. High on pollution, India dropped down the malnutrition index to number 94 on the hunger graph. But what could be the connection between crop residue burning, rising hunger and rural discontent in Punjab? It is an extractive agrarian economy working against nature.

The problem of stubble burning emerged in Punjab and surrounding areas when the native seeds and agriculture were replaced by the  Green Revolution seeds — paddy and wheat. The Punjabi farmers were persuaded to grow cereals for the nation, a mission they accomplished well. But going against nature has its own consequences, which the rivers, soil and people of the State suffer each day. It’s a race between cancer, addiction, crime, falling prices and ecological devastation to break their resilience. The extractive economy has made a few rich and many others greedy but it has destroyed the soil, transported the cows from the farms to industrial units, while the bulls have been slaughtered by the tractors. It has transmogrified the organic economy of Punjab into Udta Punjab.

The paddy straw, which fed cattle, is now being burnt, from far-flung villages to Bhatinda and Delhi. The smog effect came later as scientists and environmentalists forced farmers to delay the kharif sowing. They did manage to save water but the delay had other negative ramifications. The stubble smoke was now riding on retreating monsoon winds and polluting Delhi and the entire Ganga plains.

Yet our suffering has not ennobled us. We have fed the extractive economy again by giving hundreds of crores of public money for endorsing corporate solutions like “happy seeder” and more tractors. Allowing more resources — oil, metal and so on — to be mined from the earth and burnt in our fields. Ecological myopia, blinded by five-star seminars and social media, has failed the farmers and has been unable to curb the pollution.

Each time a cycle of nature is disrupted, cataclysms soon follow. Punjab and Haryana experienced a mini disruption as nature’s economy was replaced by an industrial system of agriculture. True to Macaulay’s principles, unfortunately, our Indian mind has not abandoned the conquest and control of nature. As each year passes, new problems emerge. Air pollution caused the death of over 1,19,000 children in India in 2019, as per a recent study. The farms that had given our ancestors nutrition and health now give us and our Vasudeva Kutumbhukam family — cows, bees, birds and so on — death and disease.

Two wrongs don’t make a right; hence we need to innovate within nature and not outside it. We need to call upon our ancient brethren for help, we need fungi.  Yes, we are talking about mushrooms. White, capped and nutritious mushrooms can be the solution to stubble burning, falling incomes and malnutrition in Punjab. Humans need to reconnect the soil and their lives with mycelium to solve these problems.

Ask any mycophile how by burning paddy straw, farmers are setting fire to gold. It is one of the preferred media of growth for many types of edible mushrooms in India. Whether they are oyster or button, a farmer can grow 600 to 900 grams of mushrooms per kg of straw. They don’t require chemicals, pesticides or other expensive inputs. All that a farmer needs is to chop the straw, add spawns/spores and wait. In about 20 to 25 days the first harvest is ready for plucking. The price of oyster mushrooms is somewhere between Rs 150 to 500 per kg. Also, keep in mind, 500 grams of chopped paddy straw is being sold at as high as Rs 300 on e-retailer websites for mushroom cultivation and garden mulch. Puthar area alone reported Rs 2 crore from the sale of mushrooms with leftover paddy straw. This practice is slowly gaining ground but farmers are far from harnessing the power of fungi.

How can the Government help? Instead of putting more resources into the pockets of the automobile and petrochemical industry, the Government needs to get mycologists on board in the planning process. Our policy should be to use bio-solutions based on nature and explore innovative uses of fungi.

The first step is to study and develop mushroom clusters in Punjab and Haryana. As mushrooms grow well on paddy and wheat straw, farmers will have raw material after each rabi and kharif harvest. Adequate storage facilities should be encouraged at the block level to store the straw and grow mushrooms throughout the year as a second crop.

Next, farmers should be trained, so that each farmer can turn waste straw into gold by producing edible or medicinal mushrooms or selling straw to mushroom growers. This can be a boon for the small and marginal farmers of Punjab. Even in a limited area, they can boost production and diversify too. This step will substantially add to their income and also increase nutrition produced per farm. A mushroom diet can bring the much-needed minerals and vitamin D in the rural thali, especially for pregnant women and growing children.

Along with the farmers, the mushroom cultivation might also boost the rural economy by creating a new eco-system. A new mushroom supply chain will create more rural green jobs. This will be an opportunity for farmers’ daughters/sons to become rural entrepreneurs, engaged in training, marketing, aggregation and allied services, supporting the mushroom ecosystem.

They can also diversify by starting mini-spawn units in the villages. Spawn/spores are like the mushroom seed, they need to be introduced to a medium so the mycelium can spread and produce mushrooms. Currently, the spores or spawn industry is still nascent in India and the opportunities are endless. The Government, under the National Horticulture Mission, may even create a portal dedicated for trading mushrooms. Potential buyers may interact with farmers through it and enter contracts.

NGOs engaged in hunger and poverty alleviation may reduce stubble burning and hunger by encouraging farmers to partner with them and producing food from waste straws for the urban poor and underprivileged people. Biodiversity institutions have a critical role, too, in categorising new varieties of fungi in these areas and conserving them.

But apart from this, conservation of local mushroom species is a matter of India’s security. In the words of the renowned mycologist Paul Stamets, “biodiversity is biosecurity” and India needs to still rediscover our fungi biodiversity to face challenges such as climate change, growing hunger and sustainability. Fungi-based methods are being used to create ethanol directly, without any chemicals, and also mycoremediation for soils and contaminated water resources. Punjab and Haryana both desperately need these to save their lands and people from cancer and chemical contamination. The children of the Green Revolution — farmers of Punjab and Haryana — need to embrace fungi to save themselves from the ill effects of industrial agriculture.

As for the policy-makers, we know they have failed as spirals of smoke enter our lungs daily. They need to reorient if they want to save public resources and the people. Since the industrial solutions are not working, we need to seek help from nature to rebuild the organic rhythms of our land and economy. It is about time the “Land of Soma” (also a mushroom) looks towards fungi to help us beat pollution and hunger together.