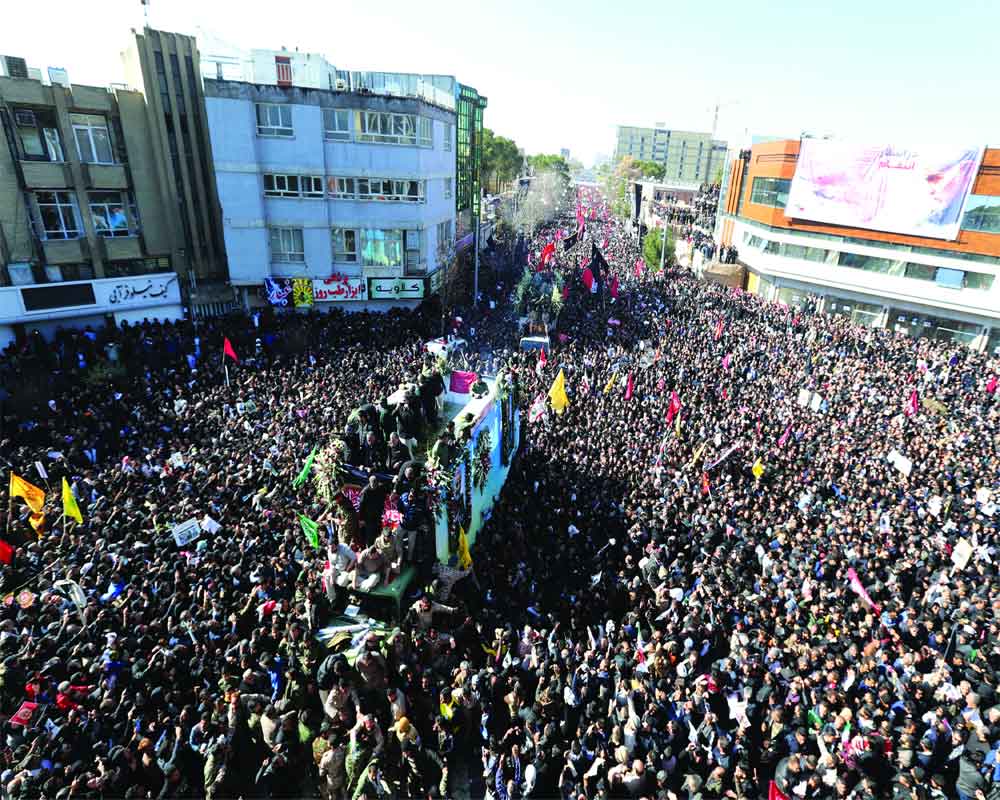 Soleimani’s death is an immense loss for Iran, but the way Iranians have supported their beleaguered leadership, it seems their grit and determination will keep the anti-US spirit high in the country.

January 3 will be marked as a watershed moment in the Iran-US relations in the competing narratives between the “justifiable extra-judicial killings” to save American interests around the world and the America’s illegal bid to undermine the sovereignty of an independent state. The assassination of Iran’s top military commander Major General Qassem Soleimani, along with Deputy Chief of Iraq’s Hashd al-Shabi Abdul Mahdi al-Muhandes and others, in a missile attack fired by an American drone has escalated tension between Iran and the US.

Soleimani was a top military strategist of Quds Brigade of Iran’s elite Pasdaran-e Enghelab-e Eslami or Islamic Revolution Guards Corps (IRGC), which is responsible for countering threats emanating from beyond the Iranian territory. Also he was one of the trusted aides of Supreme Leader Ayatollah Khamenei. He was the standard bearer of what Iran calls “Axis of resistance”.

By showing his chivalry in the Iran-Iraq war, what Iranians called it Jung-e Tahmili or Imposed War, he rose from the rank of an ordinary soldier to the chief of Quds. In the Shia imagination of jehad and shahadat (resistance and martyrdom), he held an unprecedented charisma in public sphere as he is hailed as “Living Martyr”. The US could not have imagined his popularity until his funeral which saw a sea of mourners.

It appears that the killing of Soleimani is part of US move to bring Iran to its knees. And there are fears that the US might use other tactics, like activating sleeper cells of anti-regime elements in Iran, to create disturbance. However, it won’t be a cakewalk for the US after the Iraq Parliament passed a resolution to oust the US military from the country. Besides, Iraq’s most popular Shia cleric Moqtada al-Sadr has demanded withdrawal of US troops from the Iraqi territory. He announced the reactivation of his Mahdi Army militia.

The Trump administration is going through an uncertainty in domestic politics in the wake of impeachment proceedings. It seems Trump, one of the most unpredictable Presidents of the US, ordered the killing of Soleimani, a top military strategist of Quds of Iran’s elite Pasdaran-e Enghelab-e Eslami or Islamic Revolution Guards Corps (IRGC), to divert attention from domestic issues.

As the Congress started the impeachment process, Trump has lost some credibility among the Americans. To distract the attention fixated on the impeachment, the US has taken belligerent stance against Iran giving no room for diplomacy. Moreover, Americans have a history of double standards in the region. Trump’s withdrawal from Joint Comprehensive Plan of Action (JCPOA) nuclear treaty shows another level of betrayal.

The US has a history of invasion, occupation and sabotage. The killing of Soleimani and Muhandes is a clear violation of international law and a sheer act of aggression against an independent and sovereign country. Such extra-judicial killing augments the Iranians’ bitterness towards Pax Americana and their slogan ‘Marg bar Amreeka’ (Death to America).

During my recent visit to Tehran, Isfahan and Qom, I saw Iranians have an aversion to any kind of hegemony. The country is flourishing despite harsh international economic sanctions. Though it was a heavy blow to Iran’s security establishment, the Iranians are well-versed in dealing with such crisis.

Their perseverance is unmatched as their top leadership was eliminated during the initial days of the revolution. Despite all odds, Iranians have successfully taken out their country from the jaws of catastrophe. In forty years, the Iranians have learnt the craft how to overcome these hardships and the attempts to bully Iran result into emboldening the resistance against Western hegemony.

The missile attacks on Ain al-Assad US base in Iraq shows Iranian determination and capabilities that it will fight back if it is being bullied by any foreign forces.

The West Asian region has been a flashpoint since the discovery of oil resources. The greed of US and other Western powers for exploiting oil has created mess in the region. Since 2003 when George W Bush invaded Iraq surpassing the will of international community, Iraq has been in turmoil. In a surprise move when ISIS attacked Iraq and Syria with the tacit understanding with the US and Israel and Saudi Arabia and diminished the borders created after Sykes-Picot agreement, it was Soleimani who came to the rescue of both the countries.

He was the main architect who nipped the ISIS terror in the bud and did not let it raise its tentacles. Without involvement of Iran in the counter-offensive, it would have been impossible to wipe out ISIS threat.

Recently Iranian Foreign Minister Jawad Zarif rightly said at Raisina Dialogue meet in New Delhi that there are two entities who are celebrating the assassination of Soleimani, Trump and Daesh (ISIS). He was alleging that US and Israel are deliberately involved in raising ISIS to create mayhem in the region and to give sustenance to its large military industrial complex.

Regional implication: What next?

The moot question is how Iran will respond to this void created by Soleimani’s departure. He was the main architect of Iran’s foreign and military policy in the wider West Asia, particularly in the Levant and the Fertile Crescent region. He enjoyed special relationships with many non-state actors who were resisting the US and Israeli hegemony in the region. He was a key figure in the region and held considerable influence in Iraq, Syria, Lebanon, and Palestine. In Iraq, he had been instrumental in forming the Popular Mobilistaion Forces (PMF) which cut their teeth against Daesh.

In Syria, he pulled out President Bashar al-Assad from the brink of collapse. The terrorist groups such as al-Nusra Front were funded and armed by regional and international powers. He also had warm rapport with Hezbollah in Lebanon, Iran’s key ally, and Hamas and Palestinian Islamic Jihad (PIJ) in occupied Palestine.

Soleimani was highly pragmatic and knew how to deal with the situation in adversities.

He was the man who had upset the US hegemony in the region. His absence will be felt deeply in Iran.  Soleimani’s death is an immense loss for Iran, but Iranians’ grit and determination is likely to keep the anti-US spirit high in the country.