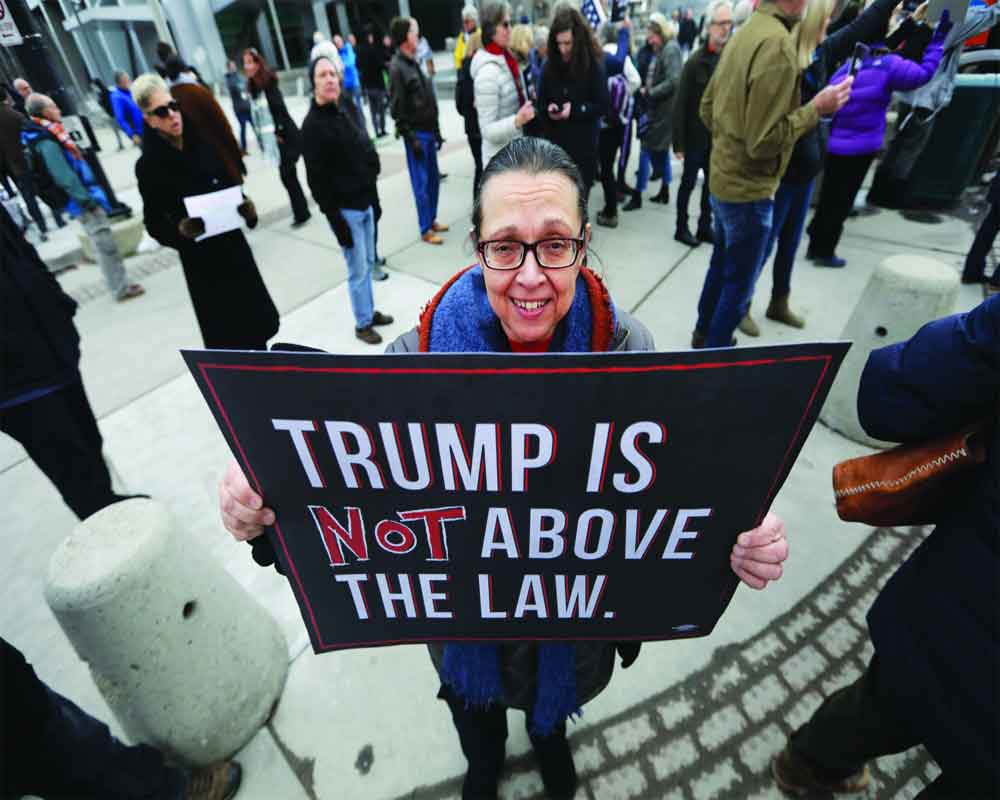 Republicans enjoy a 53-47 majority in the US Senate so the outcome of the testy trial would end in the final acquittal and exoneration of President Donald Trump. However, even after he is absolved and emerges blameless, he will be shaken by the ferment in the Capitol Hill

The American Constitution clearly lays down and ekes out the conditionality under which the American President can be impeached by the House of Representatives and the US Senate in tandem with the idiom of the alleged unsavory work by the US President as a breach of trust. Still, if we delve inside the historicity of impeachment in the United States of America, we shall reach an evaluation that only the path-breaking and iconoclast Presidents in the history of White House have faced allegations in the nation’s political firmament.

Al Jazeera reports about the onerous political theme of impish process of impeachment that “Pelosi, a Democrat, had earlier resisted calls to begin impeachment proceedings, urging restraint as House committees aggressively investigated Trump, a Republican, through subpoenas of witnesses and documents. But following allegations that Trump pressured the leader of Ukraine to investigate the family of former Vice President Joe Biden, who is vying for the 2020 Democratic presidential nomination, pressure from inside the Democratic caucus for an impeachment enquiry mounted”. But, what commoners need to comprehend is that the America First proclamation and the clarion call of the Conservatives did have its WASP ring heard in the 2016 elections and might as well work the way of the present President in 2020, if, the political and electoral issues are arranged in a specifically schematic matter.

The debates in the Philadelphia convention in 1787 categorically implicated any civil officer found guilty of bribery, treason,  misdemeanour and high crimes. Still, the pertinent poser which can be counted in is the theme that whether the Democratic outfit with a left liberal bias is misusing its pelf and political station of being the quintessential opposition in the American House of Representatives by targeting the President. Though the House of Representatives might have implicated President Trump, the May Day still lies with the Senatorial courtesy which is numerically dominated by the Republicans.

The Senate Majority Leader, Mitch McConnell, has contended and informed the hoi polloi that the Senate is not busy anyways now and the trial of impeachment will be the first order of business for the American Senate. A media house further informs, “Other than Trump, only two other US Presidents have ever been successfully impeached and in neither instance was the president removed from office. Andrew Johnson was impeached in 1868 in the tumultuous aftermath of the American Civil War; and Bill Clinton in 1998 for issues including his relationship with White House intern Monica Lewinsky.”

Al Jazzera further informs the author and the audience, “The House Judiciary Committee in 1974 voted to recommend impeachment accusing another President Richard Nixon of planning to obstruct an investigation in the Watergate scandal. Before the full House could vote on impeachment, Nixon became the only US President ever to resign.” Thus, it can be advanced in a surefooted manner as a pertinent factoid, that, only two American Presidents have been removed from office after the impeachment proceedings have been initiated in the American temple of Vox Populi. Who was more damaged then the Monica Lewinsky case scenario which President Bill Clinton had to undergo with its attendant ignominy. Thus the matrix infested political firmament of the impeachment process has to subsist with the Fien de siècle of the US’ political culture that a true blue American President has to be removed through the judicious prism of misdemeanors. Still, no direct evidence exists that President Trump’s office colluded with President Zelensky of Ukraine which had become the liberal bias and a kind of a brick bat to beat the American incumbent with. But it needs not be forgotten that criminal charges cannot be brought up against the running the US President and only once the President has been removed then only the onerous criminal charges can be brought against the American President, which will the standard and rote process in the context of President Trump too.

Still, the seemingly embattled President Trump’s holiday break has been spoiled by House Democrat Nancy Pelosi as the unpredictable but strongly stylish American President has fought back with his stereotypical bluster in a series of Christmas tweets. One of the prominent and seething tweets is of the order of the following on December 25: “Why should Crazy Nancy Pelosi, just because she has a slight majority in the House, be allowed to impeach the President of the United States? Got ZERO Republican votes, there was no crime, the call with Ukraine was perfect, with ‘no pressure.’ She said it must be “bipartisan...”. This is what the CNBC portals inform us in the context of the acrid and scathing responses of the American President. But, it might be early days if the House Democrats intend to witness a grovelling  face saving exercise by the White House establishment as part of the consequences of the impending trial in the US Senate. President Trump’s followers and adherents will do well to highlight and bamboozle the Public narrative of this event being bereft of “any palpable crime.” President Trump has demanded an immediate trial and over the top of it, he has blamed the Democrat party of being tardy in not providing due process to the targeted, “most powerful man on the face of Planet Earth”.

Republicans enjoy a 53-47 majority in the US Senate so the outcome of a slated and testy trial would end in the final acquittal and exoneration of President Donald Trump. Can the American President emerge out unscathed, untainted and vindicated in the aftermath of the humiliating defeat in the House of Representatives? He will be absolved and emerge blameless but shaken by the ferment in the Capitol Hill. The country is divided over opinions and not policies and that fact will be amply tested and made crystal clear by the electorate and the American people in January, 2020. If President Trump were to get impeached in the trial then it would be the task of Vice President Mike Pence to be the acting man in the White House till the American electorate decide. On the Christmas day, apart from the snow avalanche the cold chill of the House of Representatives development seemed to have hit the American President. President Trump erupted in a series of frenzied tweets shutting out “the glee quotient” from the conservative war horses, but only as a transit theme before the Senate will exonerate the flamboyant US President. Still, the Presidency is definitively embattled. Earlier it was perceived that the currant dissensions in the Democratic party establishment might facilitate a safe exit for President Trump. But, his bumptiousness seemed to have not been as fortunate as the US House of Representatives voted finally to impeach the White House man and facilitate the trial in the heady portals of the US Senate.

(The writer teaches at International Relations at IIPA, New Delhi)