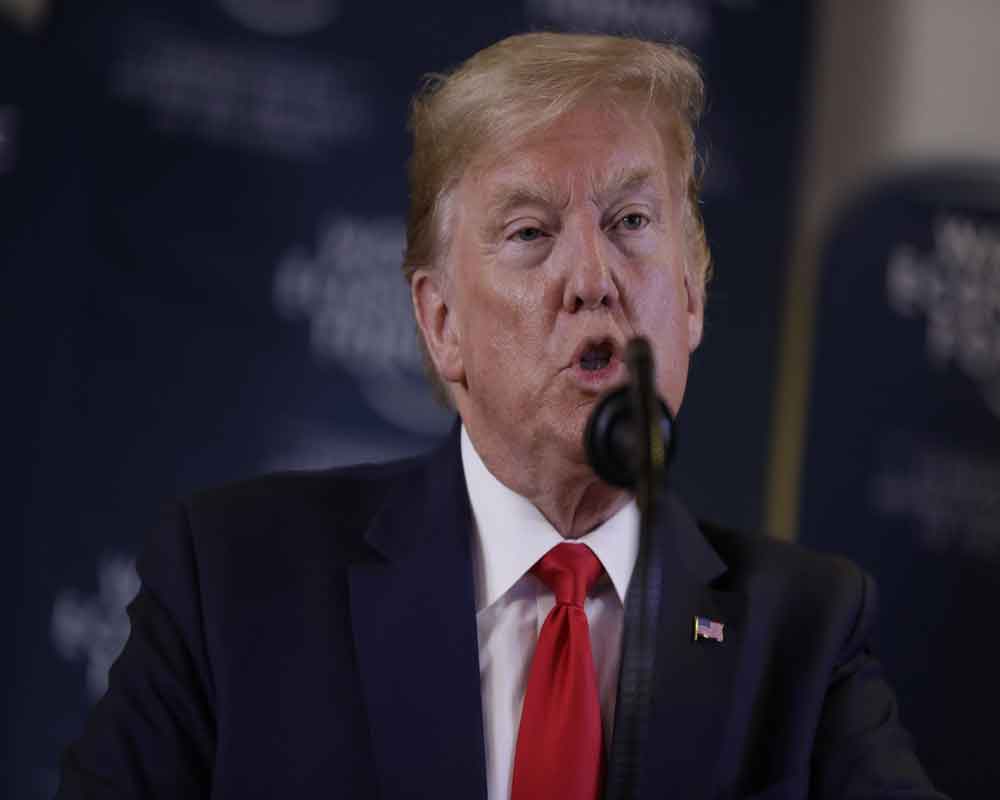 The US Senate plunged into President Donald Trump's impeachment trial with Republicans abruptly abandoning plans to cram opening arguments into two days but solidly rejecting for now Democratic demands for more witnesses to expose what they deem Trump's "trifecta" of offenses.

Trump himself claimed he wants top aides to testify, but qualified that by suggesting there were "national security" concerns to allowing their testimony.

"We have a great case," Trump said on Wednesday at a global economic forum in Davos.

In a press conference before returning to Washington, Trump said his legal team was doing a "very good job."

He appeared to break with Republicans efforts to block Democratic motions to immediately call witnesses and subpoena documents. Instead, Trump said he'd like to see aides, including former national security adviser John Bolton, Secretary of State Mike Pompeo, and acting chief of staff Mick Mulvaney, testify as witnesses Trump said he'd leave the "national security” concerns about allowing their testimony to the Senate.

Tuesday's daylong session started with the setback for Republican Senate leader Mitch McConnell and the president's legal team, but it ended near 2 a.M. On Wednesday with Republicans easily approving the rest of the trial rules largely on their terms.

With the rules settled, the trial is now on a fast-track. At issue is whether Trump should be removed from office for abuse of power stemming from his pressure on Ukraine to investigate Democratic rival Joe Biden and Biden's son Hunter as Trump was withhold aid to the country, and for obstructing Congress' ensuing probe.

Chief Justice John Roberts gaveled open the session, with House prosecutors on one side, Trump's team on the other, in the well of the Senate, as senators sat silently at their desks, under oath to do “impartial justice.” No cellphones or other electronics were allowed.

As the day stretched deep into the night, lawyerly arguments gave way to more pointedly political ones. Tempers flared and senators paced the chamber. Democrats pursued what may be their only chance to force senators to vote on hearing new testimony.

After one particularly bitter post-midnight exchange, Roberts intervened, taking the rare step of admonishing both the Democratic House managers prosecuting the case and the White House counsel to “remember where they are."

"I think it is appropriate at this point for me to admonish both the House managers and the president's counsel in equal terms to remember that they are addressing the world's greatest deliberative body," Roberts said.

He told them that description of the Senate stemmed from a 1905 trial when a senator objected to the word "pettifogging," because members should "avoid speaking in a manner and using language that is not conducive to civil discourse.”

Over and over, Republicans turned back Democratic amendments to subpoena documents from the White House, State Department, Defense Department and budget office. By the same 53-47 party-line, they turned away witnesses with front-row seats to Trump's actions including acting White House chief of staff Mulvaney and Bolton, the former national security adviser critical of the Ukraine policy.

Only on one amendment, to allow more time to file motions, did a single Republican, Sen. Susan Collins of Maine, join Democrats. But it, too, was rejected, 52-48.

As the visitors' gallery filled earlier with guests, actress-and-activist Alyssa Milano among them, and Trump's most ardent House allies lining the back rows, the day that began as a debate over rules quickly took on the cadence of a trial proceeding over whether the president's actions toward Ukraine warranted removal from office.

"It's not our job to make it easy for you," Rep. Adam Schiff, the chairman of the House Intelligence Committee leading the prosecution, told the Senate. "Our job is to make it hard to deprive the American people of a fair trial."

White House counsel Pat Cipollone, the president's lead lawyer, called the trial "a farce." He scoffed that the House charges against Trump were “ridiculous.”

The White House legal team did not dispute Trump's actions, when he called Ukraine and asked for a “favour,” which was to investigate Biden as he withheld military aid the ally desperately needed as it faced off with hostile Russia on its border. But the lawyers insisted the president did nothing wrong. "Absolutely no case," Cipollone said.

Schiff, the California Democrat, said America's Founders added the remedy of impeachment in the Constitution with “precisely this type of conduct in mind - conduct that abuses the power of office for a personal benefit, that undermines our national security, and that invites foreign interference in the democratic process of an election."

Said Schiff: "It is the trifecta of constitutional misconduct justifying impeachment.''

The other lead lawyer on Trump's team, Jay Sekulow, retorted, “I'll give you a trifecta,” outlining complaints over the House Democrats' impeachment inquiry process.

In Davos, Trump repeated his attacks on Democratic House managers serving as prosecutors in the trial, saying he'd like to "sit right in the front row and stare at their corrupt faces" on the Senate floor during the trial but that his attorneys might have a problem with it.

And he said he wants to deliver the State of the Union as scheduled on February 4 even if the trial is ongoing, calling the address "very important to what I am doing" in setting his administration's agenda.