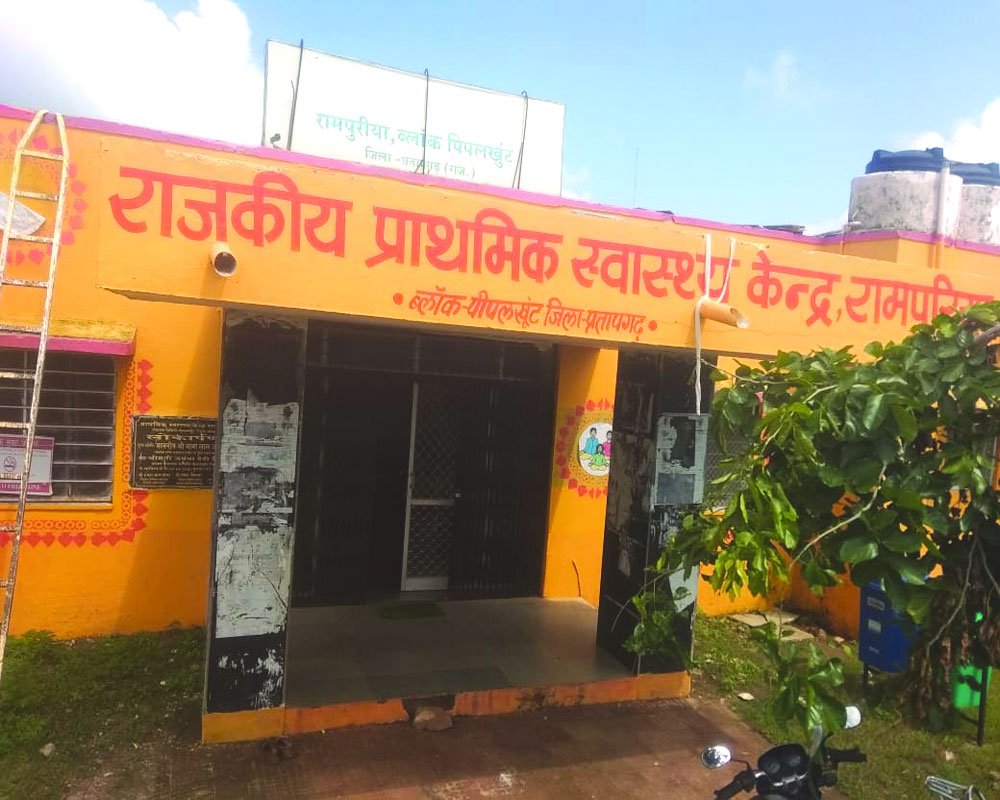 Rampuriya, a small hamlet in Rajasthan’s southern hilly district Pratapgarh, has been able to largely escape the Coronavirus onslaught. Till last month, there were around 182 reported cases, out of which 160 had recovered while three lives were lost. Had there been cases like the rest of the country, the total lack of basic health care services in this remote region would have made it challenging for the administration to control the situation.

The Primary Health Centre (PHC), which is supposed to be the basic functional unit of government-funded healthcare, is practically a misnomer here, more so after the PHC started being operated on Public-Partner Partnership (PPP) mode from 2017, allege villagers. In 2015, the Rajasthan Government decided to hand over 213 of the total 2,088 PHCs to private agencies to run on PPP mode under the ‘Run a PHC’ scheme that aimed at improving the services and develop the defunct and poorly functioning PHCs.

The ‘Run a PHC’ scheme agreement stated that the state government would provide the private agency Rs 22 to Rs 35 lakh depending on the bids received for a five-year period. The private partner, on its part, is expected to employ at least 11 members in staff, including doctor, pharmacist, laboratory technicians and cleaners and an experienced Auxiliary Nurse Midwife (ANM). Apart from the money, the government kept the responsibility of infrastructure, building, medicines, surgical supplies and laboratory reagents in its own hands.

This PPP model, however, has faced criticism from health activists of the State who argue that by doing so, the government side-stepped from its primary duty of providing quality healthcare to its citizens.  Handing over these PHCs to private agencies, they believe, has not been a good move as the health facilities have deteriorated rather than improving, with no accountability fixed on either of the partners.

The arguments put forth by health activists are confirmed by the villagers. “The PHC in our region caters to the need of a population of about 10,000 people covering 22 villages. Ever since the government started running this PHC on PPP mode, we began facing problems. The PHC was handed over to Chitransh Education Welfare Society of Jaipur. There was no doctor. Only a male nurse and an ANM (Auxiliary Nurse Midwife) were running the centre. In absence of a separate room, antenatal check-ups and minor pregnancy-related problems could not be handled. We had to take the patients about 25 km away to Pratapgarh city or to Peepalkhunt — the block level town to avail decent health services,” shared Motilal Meena, sarpanch of Rampuriya Panchayat.

According to him, the services prior to the partnership were not excellent but the doctor would visit the PHC then. Earlier, there was power-backup, deliveries took place, toilets were not as dirty, and there was water available. But after the PHC was taken over, the services deteriorated, staff seemed untrained, the bedsheets were dirty and unhygienic. The centre had a single-phase electricity connection, which did not support the inverter in case of emergency operation. Most of the time, there was no power. One bed in the male ward was always occupied by the ambulance drivers. There was no monitoring of the PHC by the government staff even after several complaints.

Rampuriya is inhabited by a huge per cent of tribal population with low socio-economic status. Due to lapse in services at the PHC, they were forced to opt for treatment in city that left them in debt. “Going to a government hospital or healthcare centre would cost us around Rs 6,000 to Rs 7,000 but at a private facility, the expenses were no less than Rs 25,000, leaving villagers in debts,” said Motilal.

Disappointed with the PHCs and their abysmal services and on getting no response after making representations to the Department of Health and Family Welfare, the members of Rampuriya Panchayat decided to file Public Interest Litigation (PIL) in the Rajasthan High Court in 2018. The petition requested for implementation of better healthcare services, appointment of a medical officer, sufficient staff and proper medical facilities at the Rampuriya PHC as per the Indian Public Health Standards. They put forth request for better monitoring, quality assurance and an audit by a third party to ensure that the transformation is long-term. It also mentioned withdrawal of this particular PHC from the PPP mode as it was unable to deliver better services as promised.

In August 2019, the Jodhpur bench of Rajasthan High Court in a joint hearing on a number of PILs filed on ‘glaring inadequacies’ in PHCs operational on PPP mode, had passed an extensive order asking the State Government to carry out assessments of the PHCs around necessary parameters for their functioning.

In compliance of the order, the state carried out assessments of 75 rural PHCs and 37 urban PHCs functioning on PPP mode across the State in 2019 and submitted its report to the court. The report revealed that out of the total PHCs assessed, services of at least 30 operating in the rural areas and five in urban areas were found to be unsatisfactory, including the Rampuriya PHC. The State Government had assured the court that these PHCs shall be discontinued with immediate effect.

The Rajasthan High Court acknowledged the State Government’s assurance in its final judgement given on January 10, 2020. The court also directed the state to continue monitoring the performances of the remaining PHCs every three months through the monitoring teams formed in compliance of the August 2019 order.

However, a reality check by a Jaipur-based NGO Jan Swasthya Abhiyan (JSA) found that the State Government has still not complied with the High Court’s order and all the PHCs, found “unsatisfactory” in the assessment by the government monitoring team, continue to run on PPP mode.

Motilal, however, confirmed that following the initial court order and survey by the government monitoring team, a doctor now visits the Rampuriya PHC. As rest of the arrangement remains same, patients have to travel to towns and cities for better health services or any delivery.

“This is not just a violation of the High Court’s order but dereliction of its primary duty of providing basic healthcare services, especially in the tribal areas of the state. By not complying with the court’s order, the government has left people’s health on the mercy of the private bodies, who have not been able to provide efficient healthcare services. The pandemic cannot be an excuse as primary healthcare assumes more significance in such unprecedented times,” says Chayya Pachauli of JSA.

Principal health secretary, Akhil Arora said, “A number of guidelines have been issued after the High Court order, which would be enforced soon.”