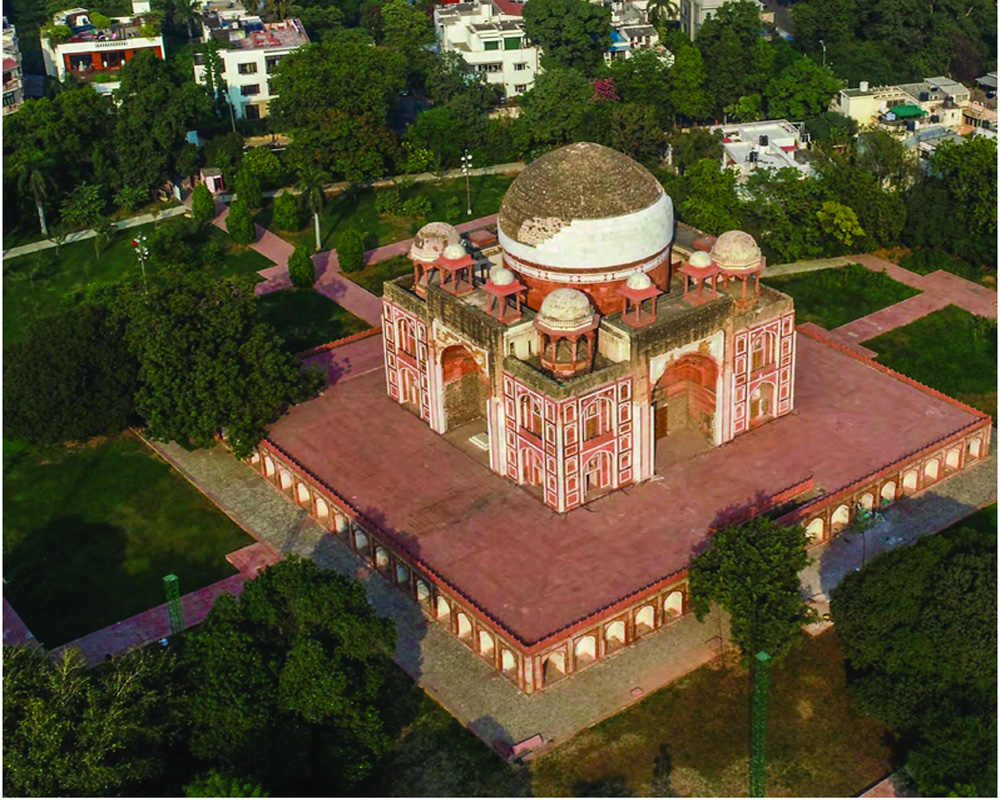 Layers of soot and lime-wash had obliterated the 17th century patterns in most parts of the Abdur Rahim Khan-I-Khanan’s tomb but especially in the main chamber. To ensure no damage occurs to the underlying plaster patterns, craftsmen took over a year to clean the domed ceiling. Finally, the mausoleum has been opened for the public

Standing only a few hundred yards south of the mausoleum of emperor Humayun is the monumental tomb built by Abdur Rahim Khan-I-Khanan for his wife — Mah Banu. Built in 1598 AD, this would be the first monumental tomb built for a lady in Mughal times and, on his death, Rahim was also buried in the mausoleum. Son of Bairam Khan-I-Khanan, a close associate of Emperor Humayun and the regent of the young Akbar, Rahim was also the greatest of Akbar’s nobles; a statesman, courtier, linguist, humanitarian, patron and above all, poet.

Despite the historical, architectural and archaeological significance of the structure, by the 21st century, Rahim’s Tomb was in a ruinous condition with a risk of complete collapse. Though an estimated six million people drive past the mausoleum annually, very few are aware that the ruin is the tomb of the legendary Rahim. The marble and sandstone cladding on the dome, facade, flooring of the terrace and the tomb, the parapets, lattice screens have largely been stripped of the building over the years including significant loss of fabric in the 20th century.

In-line with the vision of reviving heritage monuments in the country, InterGlobe Foundation and Aga Khan Trust for Culture (AKTC) announced the completion of restoration work on Rahim’s tomb in the Nizamuddin area. The foundation supported the project being executed by AKTC for the physical restoration of the Rahim’s tomb and cultural revival of Rahim and his poetry. Archaeological Survey of India, the custodian of the monument was a key supporter and partner in the project, which started in 2014.

The physical revival included repairs to the major damaged structures on the interior and exterior of the mausoleum dalans, canopies (chattris), dome, façade and landscape, along with the wall and ceiling surfaces. The landscape around Rahim’s tomb has been restored to original slopes and height. The conservation of the dome has been completed with a symbolic addition of marble cladding.

Commenting on the project completion, Rohini Bhatia, chairperson, InterGlobe Foundation, said, “India is known for its cultural heritage, hence, the preservation of our art and culture is essential for our identity. We are pleased to be a part of restoration of Rahim’s mausoleum. In addition to physical restoration, we are also establishing the relevance of sites and creating awareness among communities towards the need for preservation of culture and heritage. We strive to conserve the cultural heritage of our nation.”

Rahim ornamented his wife’s mausoleum with diverse motifs — in plaster and stone. As with his poetry, these patterns include both geometric and floral patterns commonly seen in mausoleums but also patterns seen in Hindu buildings — Swastika and Peacock among these. Each of the arches of the ground level arcade boast of medallions of varying designs in the spandrels of the arches. Where these was evidence of original design, the medallions were restored, carefully matching the quality of the 16th century craftsmen.

On cleaning layers of soot and 20th century paint layers, the principal tomb chamber and five arched bays on each façade of the ground level arcade were found to be ornamented with breath-taking incised plaster patterns. Careful cleaning, using soft brushes, revealed that much of the ornamentation of the principal tomb chamber had survived; its revelation led Prof Ebba Koch to comment, “… the cleaning of the amazing decoration of the inner hall. We can now see again and marvel about the wonderful patterns which decorate the walls and the dome. Your work changes our perception of Mughal monuments.”

The tomb is crowned with a double dome, where the outer dome would have originally been clad with marble serving as a protective layer for the underlying masonry. Though several peer reviews suggested completing the marble cladding on the dome, on the advice of the Archaeological Survey of India, restoration of marble cladding was limited to the base. This served the dual purpose of strengthening the base as well as to indicate to visitors the original finish of the dome. In view of the several opinions expressed on this matter, it is possible that sometime in the future opinion will veer towards completing the marble cladding on the grand dome of Rahim’s mausoleum. On the roof, anastylosis of four canopies was possible with stone elements found at site.

All conservation works utilise ‘available traditional craftsmanship in the country and the use of traditional building materials and skills as an integral part of the conservation process. All repairs have focussed on imparting stability and to prevent loss of original material. The conservation effort have primarily aimed to ‘prolong the life’ of the mausoleum while preventing any further damage and deterioration by minimising the impact of external agents of decay (natural and human induced) on its setting, structure and material.

Ratish Nanda, CEO of Aga Khan Trust for Culture said, “Conservation at Rahim’s tomb has been possible with a public-private partnership. Not only has a significant monument been conserved for posterity but dignity has been restored to the resting place of the cultural icon, Rahim. Conservation in the Indian context can benefit from thousands of years of building craft traditions and recourse to an inter-disciplinary scientific approach. Around 1,75,000 craft days of work has helped restore this grandeur.”