Abraham Accords for peace in West Asia a misnomer

Abraham Accords for peace in West Asia a misnomer 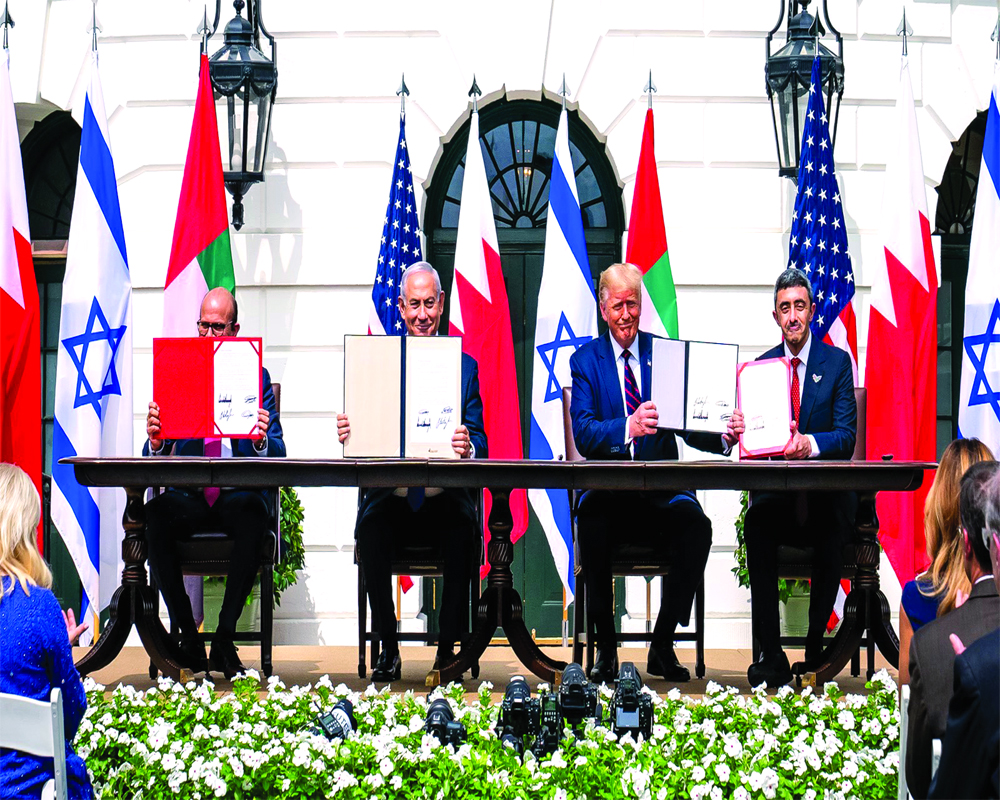 Establishing normal ties among the nations is a positive development in international relations. However, the Abraham Accords do not promise any hope for normalcy between Israel and the rest of West Asia. The central point here is the establishment of the Palestinian state. The great peacemakers and the global governance institutions are mute spectators to one of the oldest boiling points of West Asia — Palestine. Unless the issue of a permanent Palestine is addressed, the Abraham Accords will simply turn into a footnote for sure

The historic Abraham Accords completed one year this week. Hopes and fears, as expected, have continued in the West Asian region since then. The agreement has heralded no credible peace so far. But the pact has marked a fundamental shift in Arab-Israel relations. Of course, the Donald Trump Administration then, amid all the chaos, had brought three warring nations — Israel, the United Arab Emirates (UAE) and Bahrain — to the negotiation table.

Foreign policy experts across the globe are divided on the reasons for the signing of the Abraham Accords. This agreement, signed on September 15, 2020, by Israel, the UAE and Bahrain, and mediated by the US, has paved the way for normalisation of relations among three nations in West Asia. It was indeed an unprecedented move initiated by the Trump Administration. Basically, this 12-point agreement highlights the much-needed peace to be brought in among these rival nations in the region. In fact, the name “Abraham” was accorded to the treaty to honour the patriarch of three most significant monotheistic religions on this earth — Islam, Christianity and Judaism. Known as the “Father of Faith”, Abraham can well be regarded as the unifier of all the three religions as they all draw their origin from him only.

While signing the agreement, the UAE and Bahrain pledged to normalise relations with Israel. Interestingly, within a week of the signing of the accords, the two other Muslim nations from the African continent Sudan and Morocco followed suit. What was surprising was that the issue of Palestine was nowhere pegged to the accords by the signatories. Precisely, the unrest in Palestine has been the hornets’ nest for decades now for which Israel has turned out to be the arch enemy of many of these Arab nations in the region. Another striking point was that the UAE and other signatories to the agreement did not demand more critical concessions like the end of Israeli annexation of more territories or most importantly, the final establishment of a Palestinian state in the region. Truly, all these could have been set as preconditions for signing the historic pact.

It clearly shows how the parties to the pact and its high-profile mediator, Trump, were trying to push the vexed issues to the background. And, thus the understanding among all the three rival nations of West Asia seemed more like a business deal than a historic diplomatic milestone. Further, the international community must note here that the last year’s deal demanded that Israel refrain from de jure annexation of territories in the most contested region. But then who could stop Israel today? Everyone knows how outgoing Israeli Prime Minister Benjamin Netanyahu pursued his larger goal to establish the legitimacy of the state of Israel. And for all practical purposes, he received full support of the Trump Administration. This accords, in fact, helped Netanyahu get some important benefits like: first, he proved himself as a world statesman among his voters and sympathisers when he was facing serious allegations of corruption back home; second, he managed to make peace with the Arabs during his reign, but not with the Palestinians; and finally, he was cleverly diverting the attention of the Israeli public from the mismanagement of the Covid crisis by his office. In all, Netanyahu tried to enhance his image and pushed back the Palestinian cause much farther.

All the signatories to the Abraham Accords are still enemies. But then why such rival nations wanted to come to the negotiation table? Was it because of America’s intervention, both for long-term business interest and for achieving another milestone in global peace and diplomacy? Many experts say that some of the Gulf States like the UAE, having a global ambition, rightly see business opportunities in the normalisation of relations with Israel. It seems Washington has already promised Abu Dhabi advanced weapons like the F-35 stealth fighter and the EA-18 G Growler electronic warfare aircraft. All these were once inconceivable for the UAE, and these armouries are needed both to demonstrate regional leadership and possibly to effectively counter Iran, its potential enemy on the other side of the Gulf. And the interesting point is that both Israel and the US are equally suspicious of the role of Iran like the way it is perceived by the Emiratis and Bahrain. Till 1969, Iran used to claim Bahrain as a part of its territory. Therefore, even today, the restive Shia majority of Bahrain is regarded as the fifth column of Iran by the successive rulers of the country. The UAE and Bahrain can easily explore business opportunities in Israel, particularly in its most advanced high-tech sector. On the other hand, these two Gulf states

can easily attract millions of

Another significant impact of the deal is that Iran is now fully surrounded by all its enemies in the region — the Sunni regimes accompanied by an all-powerful Israel. This agreement has added pressure both to the clerics and to the political leadership of Iran. Besides the tough economic sanctions of Washington, Teheran is now facing a strong strategic pain. Clearly, once again Palestinians who have been waiting for a homeland are feeling betrayed by the accords. This agreement breaks the decades-long understanding among the Arab nations that the normal ties with Israel could be established only when an independent Palestinian state would be formed. Sadly, since 2020, Israel is coming closer to major nations of West Asia and Africa while continuing its occupation both in the West Bank and in the East Jerusalem.

Moreover, the accords have enhanced the status of Israel in the West Asian region. In a sense, it has clearly put an end to its isolation among the Arab nations. And definitely, America is celebrating after offering Israel a golden opportunity to establish its identity among the most powerful Gulf States of the zone.

Today, West Asia is trembling as paradigm shift is happening faster than expected. Stable peace still eludes West Asia. And the question is how far? Probably, chaos in this part of Asia is a never-ending process. Frankly speaking, establishing normal ties among the nations is a positive development in international relations, but when it comes to Abraham Accords, it could be a misnomer to say so. Nowhere does it promises any hope for normalcy between Israel and the rest of West Asia. The central point here is the establishment of the Palestinian state. And it is not happening and may not come to reality soon. This agreement was a great victory for Trump, the crown Prince of Abu Dhabi and the de facto ruler of the Emiratis Mohammed bin Zayed, Crown Prince of Saudi Arabia Mohammed bin Salman, and then Israeli Prime Minister Netanyahu. In fact, all of them needed the accords more than anyone else.

Today, the Joe Biden Administration is fully supportive of normalisation of relations between Israel and the rest of the Arab nations. But unfortunately, his regime is not able to offer the same inducements to Naftali Bennett, the new Prime Minister of Israel. And the situation in West Asia has remained the same as every single day new wounds are appearing both in West Bank and in East Jerusalem. The Palestinians are crying foul over the occupation of their land. The great peacemakers and the global governance institutions are mute spectators to one of the oldest boiling points of West Asia, i.e. Palestine. Finally, unless the Israeli occupation ends and the issue of a permanent Palestine is addressed, the Abraham Accords will simply turn into a footnote for sure.