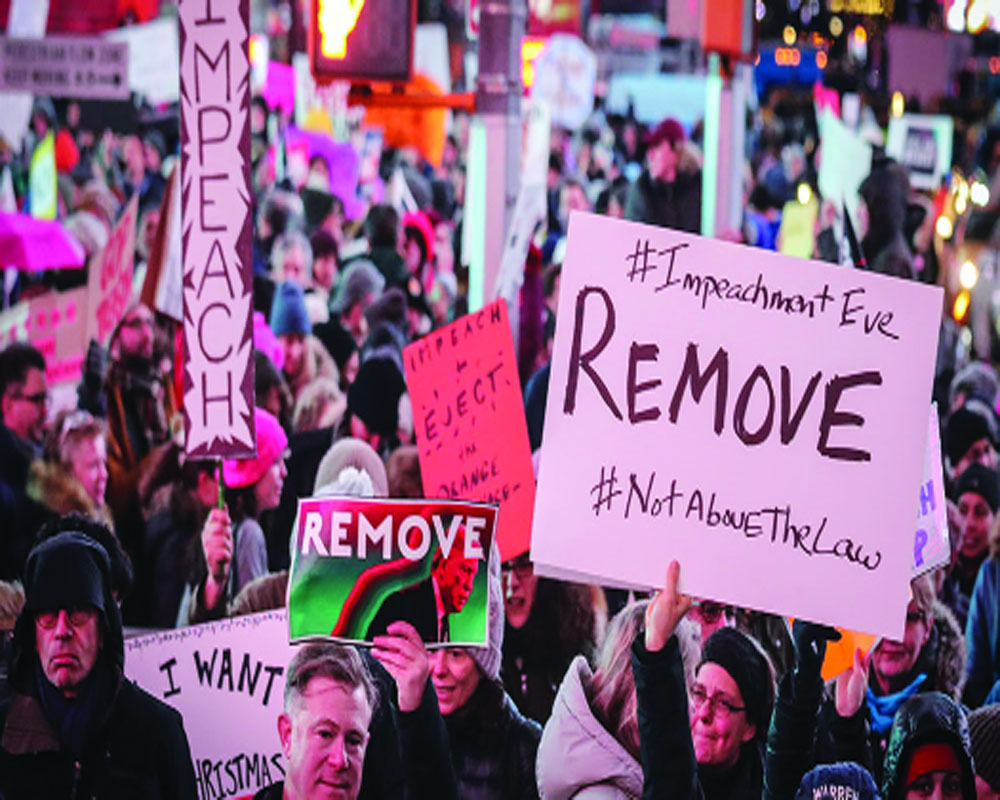 The infamy of a second impeachment is a fitting denouement of Donald Trump's presidency. If he were a man of honour or good sense, he would have quit

In a historic decision, the US House of Representatives which had initiated the process to impeach US President Donald Trump over the recent Capitol Hill attack — that was unprecedented in the country’s history — passed a resolution urging Vice-President Mike Pence to invoke the 25th Amendment to remove the President from office. The resolution, which called upon Pence to mobilise the Cabinet to activate the 25th Amendment was voted by 223 to 205 votes. The voting was mostly on party lines, with one Republican voting in favour of the resolution and another five abstaining.

The 25th Amendment, adopted more than 50 years ago in the wake of President John F Kennedy’s assassination, provides a mechanism for the succession of the President for his replacement in the event he proves unfit to serve. Under the amendment, the Vice-President and a majority of either the Cabinet or some other body designated by Congress may remove the President from office.

Wednesday’s resolution came after Mike Pence wrote to House Speaker Nancy Pelosi that he would not invoke the 25h Amendment. Earlier, the House Judiciary Committee Chairman Jerrold Nadler released a majority staff report for the impeachment of Trump. The 50-page report made a strong case to impeach the Republican President.

At a time like this, one cannot help but be reminded of the warnings issued by Mitt Romney, a Republican Senator. He had forewarned prophetically during the presidential campaign in March 2016 that Trump was a “fraud who had neither the temperament nor the judgement to be President.”

Other elder Republican Senators like John McCain and Lindsey Graham, too, had warned against Trump becoming the President. During the campaign, Trump had threatened: “If I become President, the media is going to have a problem.” He had gone on to describe the media as “among the most dishonest groups of people I have ever met.”

In a February 2017 tweet, Trump, then the President, called the media the “enemy of the American people”, a term, the critics noted then, was used by Stalin and Mao Zedong. It’s intriguing that despite the complex electoral procedure established by the makers of the US Constitution to ensure that the office of the President does not “fall to men with low intrigue and the little arts of popularity”,  Trump was elected the 45th President of the country.

The shameful assault on the Capitol Hill, the seat of the US Congress, by the rioting supporters of Trump on January 6, when the Congress was in joint session to take count of the votes of the Electoral College, proved the proverbial last nail on his presidency. The premeditated violence was so egregious that even the Republican Senate Majority Leader Mitch McConnell appealed to the lawmakers to finish the count in the wake of “the failed insurrection.”

The votes were counted and the results were declared by Mike Pence, the ex-officio President of the Senate. Biden was declared elected, despite Trump hectoring: “Do  it  Mike,   this  is   time   for    extreme  courage.”

Lawmakers, mostly Democrats and some Republicans, have accused Trump of “fomenting the violence with his relentless falsehoods” and want him impeached or removed.  Albeit, a few days are left for the inaugural of the new presidency, yet Democrats and a considerable number of Republican leaders and officials want Trump to be removed from office before January 20. They accuse Trump of abuse of power to the effect that he “wilfully made statements that encouraged and foreseeably resulted in imminent lawless action at the Capitol.”

The draft impeachment mentioned Trump’s prior and consistent efforts to “subvert and obstruct” the results of the election and referenced his call to the Georgia Secretary of State asking him to find more votes after losing the State to Biden.

The draft went on to say: “Trump has falsely claimed there was widespread fraud in the election, and the baseless claims have been repeatedly echoed by congressional Republicans... President Trump gravely endangered the security of the United States and its institutions of Government... He threatened the integrity of the democratic system, interfered with the peaceful transition of power and imperiled a coordinate branch of the Government. He thereby betrayed his trust as President, to the manifest injury of the people of the United States.”

Impeachment is not something which is new to Trump. He was impeached by the House on December 18, 2019, on two counts: Abuse of power and obstruction of Congress. Of course, he was acquitted by the Republican, the Grand Old Party, (GOP)-controlled Senate on February 5, 2020. Yet, Trump faces the ignominy of a second unprecedented impeachment bid at the fag end of his presidency. Normally, there is an impeachment investigation by the House and the evidence is sent to the House Judiciary Committee, which holds hearings, drafts articles and sends them to the full House. The impeachment of Trump by the House in 2019 took three months.

However, this time, with so few days left, there was a feeling among Democrats that there was little need to investigate what happened, since most members of the Congress were in the Capitol Hill when the mob broke in.

Speaker Pelosi held a floor vote with no hearings or reference to the House Judiciary Committee.  Now that the House has moved a resolution urging Mike Pence to invoke the 25th Amendment to remove the President from office, the article and evidence would be sent to the Senate, where a trial would be held and there would be final votes to convict or acquit. It would outlast the tenure of Trump.

However, even now, many Republicans, even those who have criticised Trump, say impeachment would be unhelpful, as it would do “more harm than good.” But Democrats and some Republicans, too, feel that: “It must be made clear that no President, now or in the future, can lead an insurrection against the US Government.”

No American President has ever been removed from office by the impeachment process, and no President has been impeached by the House more than once. Impeachment proceedings were launched against four Presidents, namely, Andrew Johnson (1868), Richard Nixon (1974), Bill Clinton (1998) and Donald Trump (2019) but the motions failed.

Nixon resigned before the proceedings were launched. Legal experts are divided into three camps over the desirability or otherwise of the impeachments proceedings against Trump. According to one view, “A President can be impeached only while in office.” Another opinion is that, if the House votes to impeach while the President is in office, the Senate can proceed to a trial even after the President has left office.  And, a third view is that the entire process can begin even after the President is out of office.  No President has ever been impeached after leaving office.  But as the House Speaker, Pelosi, said: “Democrats will preserve every option” to force Trump from office, either through the 25th Amendment or impeachment. In the end, whether Trump is impeached or not, only time will tell. However, the infamy of a second impeachment is a fitting denouement of Trump’s presidency. If he were a man of honour or good sense, he would have quit. But a dignified exit is not Trump’s style of functioning. He will make a mess of it and go down fighting.

(The writer is former Additional Secretary, Lok Sabha. The views expressed are personal.)