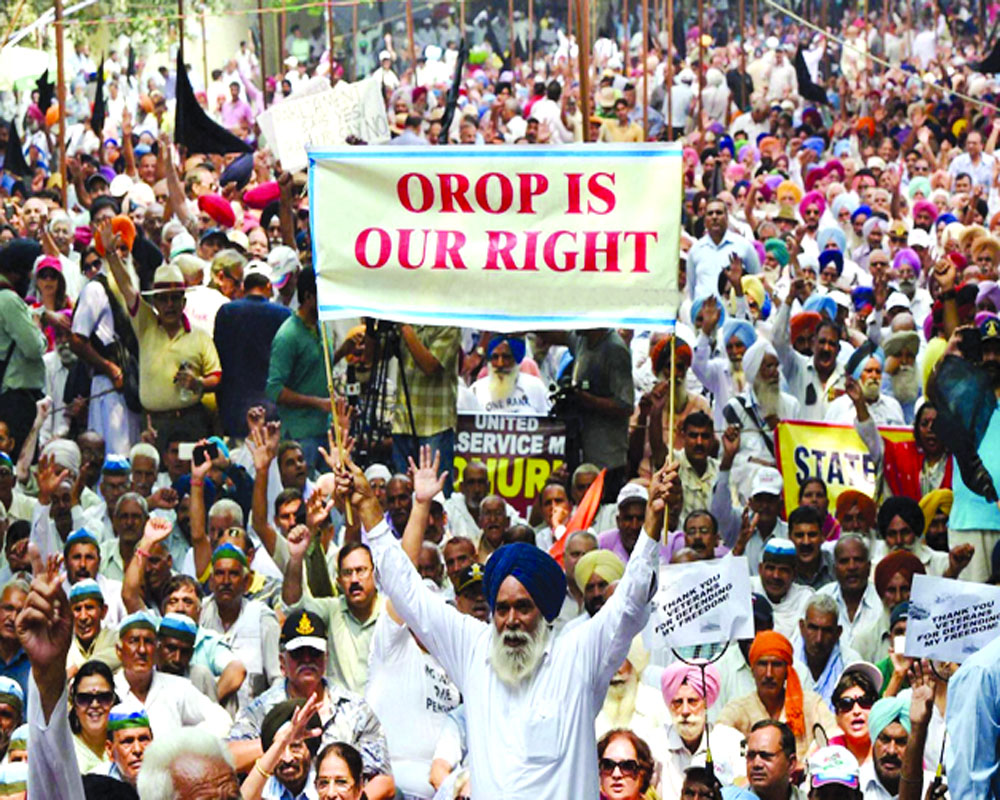 The ‘One Rank One Pension’ imbroglio is tormenting our Defence personnel and veterans, who continue to lose hope each passing day

One issue that distinguishes the Narendra Modi Government from its earlier iterations is the manner in which it has used the military, quite successfully at that, to portray an apparently muscular foreign policy, not least for the domestic audience. This has allowed it to reap rich dividends at the hustings. Yet ironically, apart from praising the military in public, Modi has done little for them on the ground, displaying little concern for the morale or well-being of its personnel.

Take the issue of welfare of our servicemen. The Government has reduced Canteen facilities, is intent on opening up and monetising Cantonment lands, adding to the insecurity of families of servicemen separated over long periods due to their spouses being deployed either operationally or on training. In addition, he has refused to authorise the Non-Functional Financial Upgrade (NFFU), which is authorised to other Central Government services, including the Central Armed Police Forces, thereby lowering their status and emoluments in comparison to the other services. The plain fact is that the grant of NFFU to bureaucrats allows them to get OROP, through the back door as it were, because nearly all of them now retire in the Apex Grade.

All these little pinpricks rankle and more so this Government’s unwillingness to implement OROP in letter and spirit as envisaged by the Parliamentary Committee headed by veteran BJP MP Bhagat Singh Koshyari: A definition that had been accepted by both Houses of Parliament and the then UPA Government in power. What is particularly galling is that Modi used this very issue to galvanise the serving and veteran community during the 2014 general elections.

His sanctioning of a distorted version of what had been promised earlier forced the veterans to launch peaceful protests on June 14, 2015, which continue to this day. The fact that the Government has done nothing to resolve matters, and instead resorted to issuing misleading statements and even violence against them, is undoubtedly a precursor as to how this Government will handle the farmers’ protest in the long run.

At the end of the day, the issue is very simple. All that the veterans demand is a chance to live out their retirement with dignity, feasible only if their pensions are protected from rising inflation as the majority retires relatively young; that this Government is unwilling to do so reeks of hypocrisy.

For example, even while this Government opposes OROP for its military veterans, it lost little time in ensuring that all Members of Parliament receive pensions calculated in much the same manner that military veterans have been demanding. In 2018, it amended Clause 8A of ‘The Salary Allowances and Pension of Members Act, 1954’, to provide for an increase in the authorised pension every five years on the basis of the Cost Inflation Index, which clearly links pensions for all former members to what is received by the incumbent.

This unfair treatment, especially the Government’s refusal to put in public domain the Justice Reddy Committee (to look into anomalies in OROP) Report, submitted in October 2016, forced the military veterans to approach the Supreme Court. Over four years later, the case has made tardy progress mainly due to the Government’s efforts to delay.

By not taking cognisance of this issue, the Bench has not been kind to the veterans, who continue to suffer and lose hope as each day passes. What is worse, the Justices hearing the case, now in the final arguments stage, have repeatedly postponed the hearing on the grounds they have not had the requisite time to study and understand the case in detail. The next hearing is in a few days and one hopes the Bench will actually hear the case and not kick it down the road.

Oddly enough for the vast majority of us, not particularly conversant with the intricacies of the judicial process, this hearing in itself appears to be completely superfluous. This is because the Supreme Court had on September 9, 2008, in its judgment in the case of Union of India and Maj Gen SPS Vains and Others, ruled: “No Defence personnel senior in rank can get lesser pension than his junior irrespective of the date of retirement and similarly placed officers of the same rank are to be given the same pension irrespective of the date of retirement.” These are directions that the Defence Ministry has yet to fully implement and which in no uncertain terms accede to what the veterans have been demanding.

Interestingly enough in 2014, when the Supreme Court was passing directions to the Government to correct the anomalies in the pensions of High Court Justices, then Chief Justice of India P Sathasivam directed that “one rank one pension must be the norm in respect of a constitutional office”, a benefit which Justices of the Supreme Court already enjoyed.

Finally, can it really be the case that in a democracy like ours, the constitutional authorities do not see themselves as mere public servants and believe themselves to be superior to other Government servants and ordinary citizens?