Lungs of the world going up in smoke

Lungs of the world going up in smoke 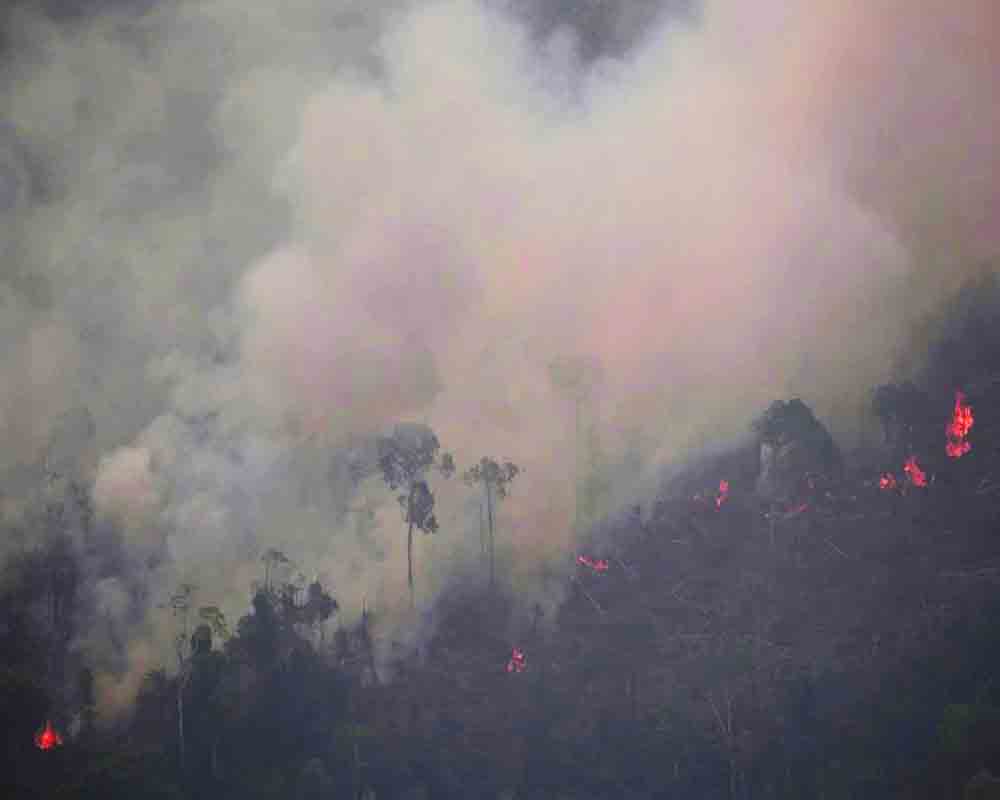 Unlike last year when Brazil’s President Jair Bolsonaro refused to accept his own Government’s data on Amazon forest fires, this time he has declared 120 days ban on unauthorised outdoor fires as annual burning season in the Amazon region is coming up. However, his half-hearted efforts in preventing and stopping the forest fires threaten to wipe out thousands of insect, animal and medicinal plant species

Better known to the world community as the Amazonia, the Amazon jungle or the Amazon, the world’s largest remaining rainforest has been facing a huge devastating fire almost every year.

When the Amazon was burning last year, and the international critics blamed the Brazilian Government of Jair Bolsonaro for not doing enough, but the latter simply rejected the charge. The “lungs of the planet”, the Amazon is facing a grave threat to its survival.

Subsequently, it is igniting a bitter debate about who is to be blamed for the raging blaze that ravages the rainforest each year. Despite scathing attack on Bolsonaro by international environmental groups and governments, his approach towards the forest fires has remained fundamentally unchanged.

According to the report of the World Meteorological Organization last year, satellite images display smokes emerging from the Amazonia reaching across the entire Latin America and fast approaching the Atlantic Coast. Surprisingly, he has described Brazil’s rainforest protection as an obstacle towards the economic prosperity of the nation.

Why are these rainforests destroyed? The rainforests in the Amazon are being devastated because the value of the rainforest land is judged only by the value of its timber. And this has become a regular practice by the short-sighted governments, landowners, mafias and a vast network of multi-national logging companies.

Experts estimate that as rainforests are fast depleting, we are in the process of losing nearly 137 insect, animal and plant species every day. This equates to about 50,000 species a year. Again, as medicinal rainforest species are disappearing, this may lead to creating critical problems for curing many life-threatening diseases as well, claim experts.

At present 121 prescribed medicines distributed and sold worldwide are manufactured from plant-derived sources. Further many of the big pharma companies in Western countries completely rely on rainforest ingredients. The saddest part of the deforestation, fire and subsequent land grabbing in the Amazonia is that without any compunction the Brazilian Government, the mafias and giant MNCs are ruining the densest rainforest in the globe.

The Bolsonaro Government simply blames the media for exaggerating the problem to undermine the credibility of his Government. He peddled a theory that some non-governmental organisations were involved in setting the forest on fire in retaliation for losing funds from his Government. Last year, the World Wildlife Fund challenged Bolsonaro’s claim that the NGOs were behind the forest fires in the Amazon.

Currently, Brasilia is up in action. Amid the massive fires in the Amazon and drought in the country, Bolsonaro has declared 120 days ban on unauthorised outdoor fires as annual burning season in the Amazon region is coming up. Meanwhile, he has ordered the deployment of the armed forces in the region to stop forest fires.

It is for the third consecutive year that he has been deploying army to safeguard the critical rainforests. The primary job of the forces would be to fight forest fires and prevent deforestation.

However, the military deployment will be simply restricted to only 26 municipalities in four affected States — the Amazonas, Mato Grosso, Para and Rondonia. It is to be highlighted here that earlier military was deployed for the entire Amazon region so as to prevent fire and deforestation. This all happened in 2019 when there was an international uproar over Amazon fires that trapped vast amount of greenhouse gases leading to global climate change.

Environmental experts comment that such deployment of the army will not lead to a permanent solution to the raging issue of forest fires. Of course, it could be a short-term strategy to deter illegal forest felling, but the forces can nowhere replace the role of the environmental agencies in the Amazon region.

Today, Brazil is reeling under the worst drought in decades. And this drought is wreaking havoc on hydroelectric dams and crops. The drought is badly threatening the nascent Covid-19 recovery of the biggest economy of South America.

Many in Brazil’s central and west believe the drought is being brought by the massive destruction and depletion of the rainforest in the Amazonia. The experts say deforestation has driven away or lowered the level of the clouds generated by the Amazon for decades in the past.

And in fact, these clouds are the prime source of rain across South America. Last one decade or so, the destruction of the rainforests has led to decline in rainfall in the whole of central and the western Brazil. It is a part of the larger global issue of climate change, and it is now seemed to be chronic for a country like Brazil.

In the first three months of 2020, the deforestation in Brazil’s Amazon rainforest rose to 51 per cent in comparison to 2019. According to the National Institute for Space Research (INPE), an area seven times larger than London was cleared last year right under the administration of Bolsonaro. Even in 2019, there were more than 72,000 individual blazes in comparison to previous years.

Data collected from national research organisation indicate that deforestation has increased by 25 per cent in the first five months of this year compared to the previous year. Therefore, the scientific experts and forest observers have rightly warned the Bolsonaro administration of the risk of massive fire on much bigger scale.

August and September are too crucial when it comes to forest fires. Already more than 23 fires have been recorded this year. And all these fires are recorded in the State of Mato Grosso, on the South-Eastern tip of the Amazonia. Besides, the dry season creates favourable conditions for the spread of fire.

But experience shows that starting a fire is the work of the humans, either by accident or deliberately. Interestingly as per media sources, the National Institute for Space Research in Brazil Instituto Nacional de Pesquisas Espaciais (INPE) has been counting such blaze incidents only since 2013.

We are fast losing biological resources as human civilisation is surrendering to its everyday greed. Once the rainforests used to cover more than 14 per cent of the earth’s surface; today, for various reasons and the foremost could be man-made factors, we are left with around 6 per cent of such heavy rainforests across the globe. Recent scientific studies conclude that the remaining rainforests could be depleted in less than 40 years or so from now.

The Amazon region has a long history of human settlement. The evidence uncovered in the last one and a half decade reveals that the Amazon rainforest was once home to large sedentary populations. Besides the well-known empires of the Inca people and their predecessors, millions of other people lived there in the Amazon jungle.

Their descendants, the indigenous people of the region are facing serious threat to their life and living today. Some five centuries ago, there were an estimated 10 million indigenous Indians living in the Amazon region. Sadly, today only 200,000 are left. Since the 1900s, the arrival of the European invaders led to the destruction of 90 indigenous tribes in Brazil. With the disappearance of them, the world has lost centuries-old treasures of indigenous knowledge.

Nevertheless, fire in the Amazon is not an uncommon feature with the communities living in the Amazon and nearby using fire to maintain their farmlands and pastures or to clear forest lands for other commercial purposes. Typically, these kinds of activities peak in early September and stops mostly by November. And also, when the rainy season starts in October, the dousing of the fire begins.

Another trend is that the criminal networks employed by various agents first cut down the trees and then set the entire area on fire. This eventually clears vast areas for cultivation as well as land grabbing by mafias.

Is Bolsonaro really burning the future of the Brazilians? Frankly speaking, forest felling and fires are sharply rising under him. Brasilia is failing to address the root of the problem. No policy has been successful in reducing forest fires or deforestation in the Amazon. The current conservative government is just trying to cover up the larger problem of global warming. Brazil is contributing to an unfolding global catastrophe as the Amazonia is burning at an unprecedented pace.

About 60 per cent of the Amazon Basin lies in Brazil. If the fire is not stopped, the health and wealth of the Amazon will become history for sure. Wake up Bolsonaro!