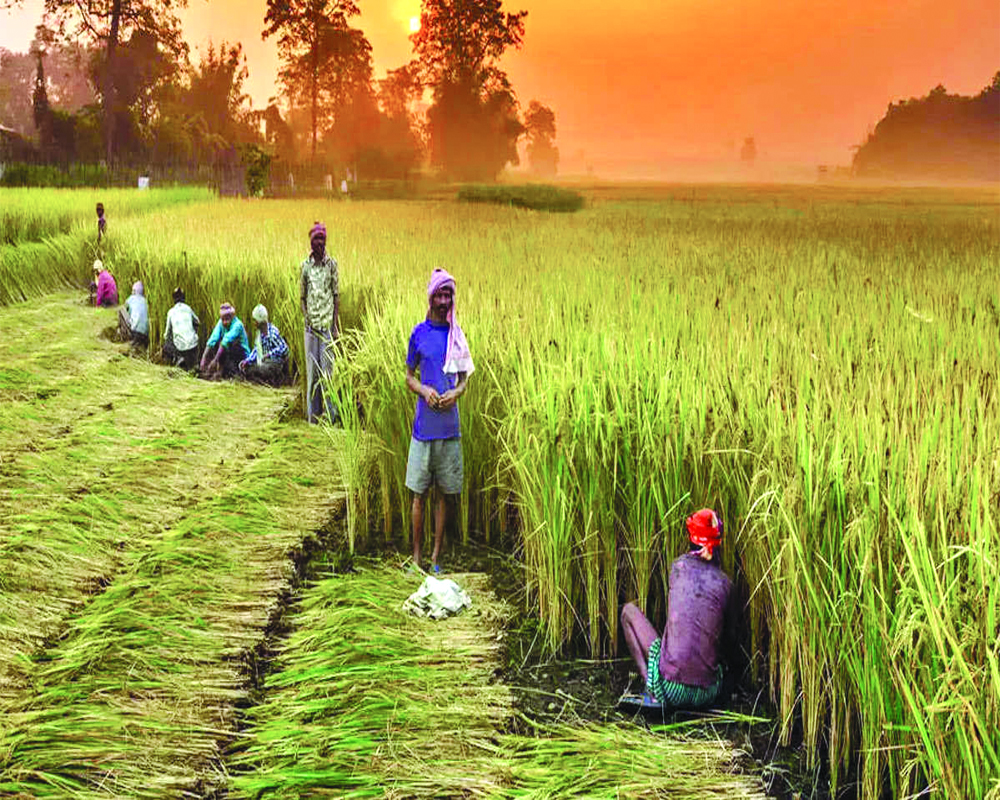 Current focus of public discourse in agriculture is on marketing system in the backdrop of the three contentious farm laws enacted last year. Early this year, the Supreme Court ordered a temporary stay on their implementation and appointed an expert committee whose report is lying unactioned since March. The Government's offer to seek suggestions on specific changes in the law have fallen on deaf ears and the protests seeking outright scrapping of laws have now turned distinctly political.

This focus on marketing has eclipsed attention on important issues of growing water deficit, soil erosion and environmental degradation - particularly nitrogen pollution or air and water — caused by current farming practices. Here is a brief explainer of issues and concerns.

In a pandemic-stricken world, time-bound eradication of hunger and malnutrition by 2030 in an environmentally sustainable manner is an international priority and commitment under United Nations Sustainable Development Goals (SDGs). The Food Systems Summit is due to be convened soon to review global preparedness. Action is required to ensure access to safe and nutritious food for all; shift to sustainable consumption patterns; boost nature-positive production; advance equitable livelihoods; and build resilience to vulnerabilities, shocks and stress.

India has offered to use its over-flowing granaries to tackle extreme hunger but India can do much more and be an agricultural power but we are presently tapping only a fraction of our strength. Here are some suggestions to achieve this mission.

By the mid-1960s, hit by back-to-back droughts, India was a “ship to mouth” economy waiting for PL480 wheat imports from USA. Today, India is the largest exporter of rice and the second-largest producer of both wheat and rice, after China. Except for oilseeds and pulses, the country is now self-sufficient in foodgrain production.

This feat has been achieved by ushering 'Green Revolution' in the 1960s. One of the important fallouts of Green Revolution was increased use of chemical fertilisers, mainly urea for nitrogen and others to provide potassium and phosphorus.

Textbook science tells us that bacteria in the roots of leguminous plants (pulses) help in ‘nitrogen fixation’, conversion of atmospheric nitrogen into nitrogenous compounds that serve as fertilisers. These plants therefore naturally increase the nitrogen content of soil. Traditional agriculture practice of ‘crop rotation’ was to sow the legumes in between other crops to restore depleted nitrogen content of soil.

Green Revolution changed many of these practices. It boosted production with three major failings. First, its impact was confined to a few cereal crops — mainly wheat and rice — and to water surplus regions of Punjab, Haryana and parts of UP. These are no more water surplus and the water table has gone very deep. Further, the new varieties require chemical fertilisers and pesticides and there is a risk of the chemicals seeping into air and water.

Three crops (rice, wheat and sugarcane) corner 75 to 80 per cent of irrigated water.  Diversification of cropping patterns towards millets, pulses, oilseeds, horticulture is needed for more equitable distribution of water, improving sustainable and climate-resilient agriculture and most important of all, addressing the problem of nutrition deficit. Too much of cereals and sugarcane at the cost of pulses, fruits and vegetables is not good for health.

At a time when some misguided environmentalists have aligned with misguided farmers in perpetuating over-production of cereals in an environmentally unsustainable manner, it is apt to recall the report released by UN agencies (FAO, IFAD, WHO, UNICEF, WFP) on State of Food Security and Nutrition in the World on July 13, 2020.

The UN Report has estimated that if last five years' trends persist, the number of undernourished people will exceed 84 crore by 2030 whereas the goal is to reduce it to zero under SDGs.

Then there is the issue of pollution caused by chemical fertilisers and pesticides. Nitrogen pollution has implications for global warming as well.

The farmers were initially impressed by four-to-ten-fold increase in productivity of wheat and rice. They kept on increasing fertiliser use, particularly of cheaper urea. The soil kept losing its natural health and became 'addicted' to urea. With the fertiliser use efficiency on the decline, farmers used more fertiliser (than minimum required] in the hope of raising yield. Scientists found that crops generally use up only 30 per cent of nitrogen fertilisers sprinkled in the fields; the rest seeps into the environment, harming health and adding to climate change.

The “nitrogen use efficiency” of the global food system integrating crop and livestock production systems is very low, just about 15 per cent. This means that 85 per cent of nitrogenous chemicals used are lost to air, groundwater or surface runoff, threatening the quality of air, soils, and fresh waters, driving climate change, and thereby endangering ecosystems and human-health (2013 Study).

Nitrous oxide is a particularly potent greenhouse gas as it is over 300 times more effective at trapping heat in the atmosphere than carbon dioxide. Agriculture leads to about 70 per cent of nitrous oxide emissions in India. Of this, 77 per cent is contributed by fertilisers, mostly urea, according to the Indian Nitrogen Assessment published in 2017.

Cereals consume over 69 per cent of nitrogen fertilisers in India and fertilizer consumption shows a continuously growing trend, with a yearly increase of about six per cent since 1970.

Concerned about excessive use of urea and its adverse effect on environment, a major policy intervention has been introduction of neem-coated urea — coating of Neem on urea granules means the urea does not readily dissolve in water and the soil gets additional natural insecticide.

This should help but eventually we need to gradually return to chemical-free agriculture. Obviously, we cannot proceed like Sri Lanka which banned import of chemical fertilisers in the face of a serious shortage of dollars with them. It has affected food production and supply leading to imposition of emergency.

Chemical-free farming or organic farming or zero budget natural farming is yet to pick up in a big way. Currently, 38 lakh hectares of cultivable area is organically farmed by 30 lakh farmers with an export and domestic demand of Rs.7,000 crore and Rs.4,400 crore, respectively. The domestic market is growing at 17 per cent and the projected demand of organic food market is likely to cross Rs. 87.1 crore by 2021 from Rs. 53.3 crore in 2016. The export market size of organic products has increased by 42 per cent during 2021 compared to last year and the volume of organic products exported from April 2020 to February 2021 was  819,250 MT with value of $948 million.

‘Sresta Natural Bioproducts’ is a sustainable livelihood venture that has enabled 45,000 farmers turn to practicing organic farming across the country. The company has converted two lakh acres of land across 15 states. Over 200 products are sold in 10,000 stores and exported to 50 countries under the brand name 24 Mantra. A ‘jaivik kheti’ web portal in fact connects farmers to consumers for better prices.These are encouraging but still baby steps. Organic farming, perceived as a fad of the rich and expensive, cannot become a mass movement unless organic products are verifiable and affordable.

When shall we see a 'mahapanchayat' discussing these challenges before Indian agriculture?

(The writer is former Special Secretary, Ministry of Commerce and Industry, GOI. The views expressed are personal.)