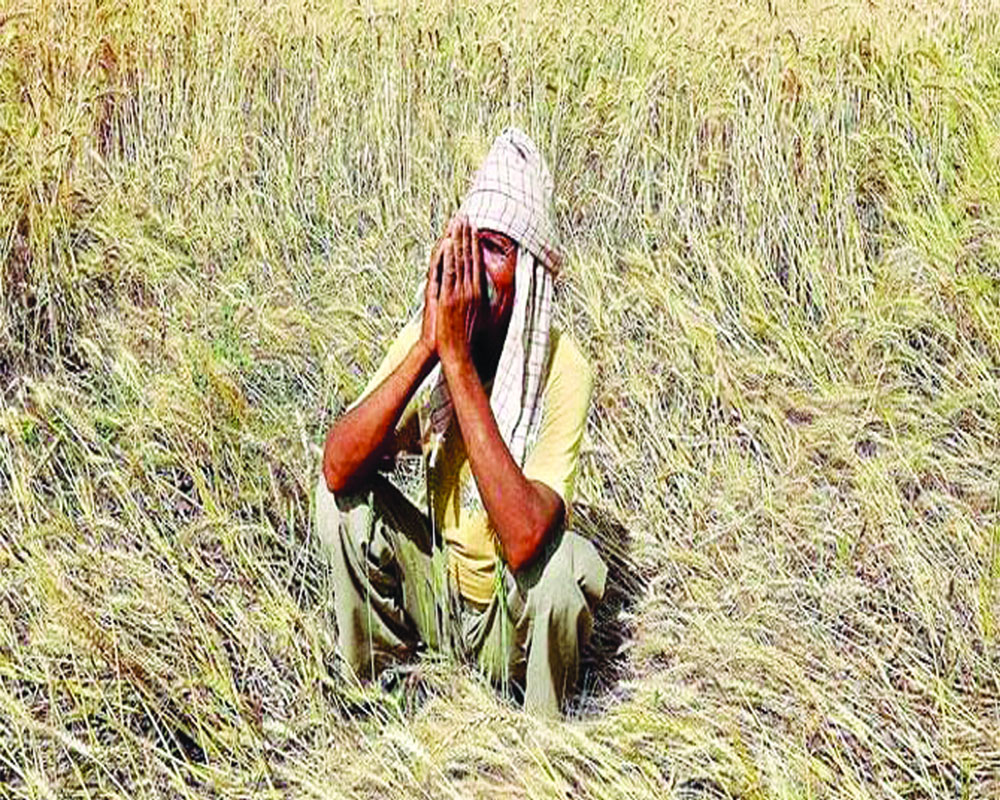 The message from the Union Budget 2021-22 is clear — Credit, Corporatisation and Disinvestment. Rahul Gandhi promptly tweeted “crony capitalism” while the protesting farmers fulminated over an “empty Budget” as the share of agriculture and allied activities in the total Budget came down from 5.1 per cent to 4.3 per cent. The allocation fell from Rs 1.54 lakh crore to Rs 1.48 lakh crore. Even agricultural neo-con economists are finding it hard to defend Union Finance Minister (FM) Nirmala Sitharaman’s agenda.

Keeping aside the “self-promotion” of the Narendra Modi Government’s schemes — the MSP (public procurement), property card, eNAM and so on — the two focus areas for the Government seemed to be agriculture infrastructure and agricultural credit. The FM stressed on the need to improve rural agri infrastructure, and it will be done by paying more tax! A new agri infra cess will be applicable on many items, practically making these products less competitive in the global market, and the Government will increase the Rural Infrastructure Development Fund from Rs 30,000 crore to Rs 40,000 crore with an additional Rs 5,000 crore for the Micro Irrigation Fund with NABARD. When it comes to credit, the COVID-19 tranches on agriculture already provide loans to various sectors within agriculture and the FM has enhanced the agricultural credit target to Rs 16.5 lakh crore.

What the Minister omitted in her speech was the burden of a failed crop insurance scheme which was once again allocated a whopping Rs 16,000 crore when urgent agriculture issues of water and soil conversation were given only Rs 28.3 crore. Degrading soil and water pollution will be the biggest challenges not just for the farmers, but for our national security. Reading the Budget’s fine print can inflame any farmer as the tax-payers’ precious rupee is squandered on the Prime Minister’s pet projects — for example, PM KISAN gives as little as Rs 17 per day for the farm household, which has failed to ameliorate the agrarian crisis. Many farmers allege that the agri Budget is a public relations exercise at best as it fails to address the issues of high indebtedness, falling incomes, soil degradation and agronomic challenges before the country.

The Government also missed an opportunity to alleviate the fears over the MSP, as it mainly reported statistics on the support price without making any budgetary allocation for more public procurement of crops or additional guarantees. The Government’s own data state that the MSP is given to only about six per cent of the farmers. Without any Budget empowering the Food Corporation of India (FCI) or public procurement, the Modi Government is toeing the WTO and World Bank’s restructuring line: End the MSP, price support, dismantle public distribution systems, end stocking limits, and so on. Aping the West, Modi too wants to shift from negative subsidies to direct bank transfer for Indian farmers, but one shouldn’t hold the breath waiting for a successful outcome.

With no Budget for loan waiver, the Government has shrewdly passed the buck to State Governments. This step will be unpopular among the farmers and may distance the BJP from its allies and regional leaders. Keep in mind that Indian farmers are already under high debt, with the average debt in the green revolution belts — Punjab, Haryana and western Uttar Pradesh — ranging between Rs 2 lakh-Rs 3 lakh per farmer. The NSSO data, read with debt-related suicides, illuminates a new “highway to hell” from Maharashtra to Punjab. Any additional credit to the farmers may actually increase their troubles as most of these funds will be used to re-finance bad loans on the Kisan Credit Card. Instead of deracinating the problem, Modi has goaded the rural economy towards speculation and eminent crash. Given the problems of Indian agriculture, after, say, a period of five years, many loans will become NPAs and foreclosures, evictions and auctions will come to rural India too. Albert Einstein said that repeating an experiment and expecting a different result is stupidity; similarly additional credit into the same system of debt-producing agriculture will sound the death-knell for our farmers.

On the matter of development funds, the Government has given bold expense targets but how much of it will actually convert into infrastructure development remains to be seen. It appears that the Government may sanction these funds to private players or FPOs to implement infrastructure projects. In a nutshell, the tax-payers’ money may again be used for private profits. This may also entail providing big grain giants, supermarket chains or the “Indian robber barons” to build super-warehouses and corporate infrastructure with our money. The tax-payers and farmers should closely monitor this fund and ask the Government for accountability.

Finally, the Budget’s promises should be taken with a pinch of salt as these tall claims many not be fiscally sound. The State Governments had already locked horns with the Centre over non-payment of GST funds; the Government had to borrow from the RBI to repay the dues.

If Modi or Sitharaman were at all serious about agriculture, they may have looked at VP Singh’s Budget of 1990 which pumped all available resources (about 50 per cent) into agriculture, not into loans and credit and thus profiting banks and not farmers.

(The writer is the Director — Policy and Outreach, National Seed Association of India. The views expressed are personal.)