Persecuting Uyghurs under guise of war on terror!

Persecuting Uyghurs under guise of war on terror! 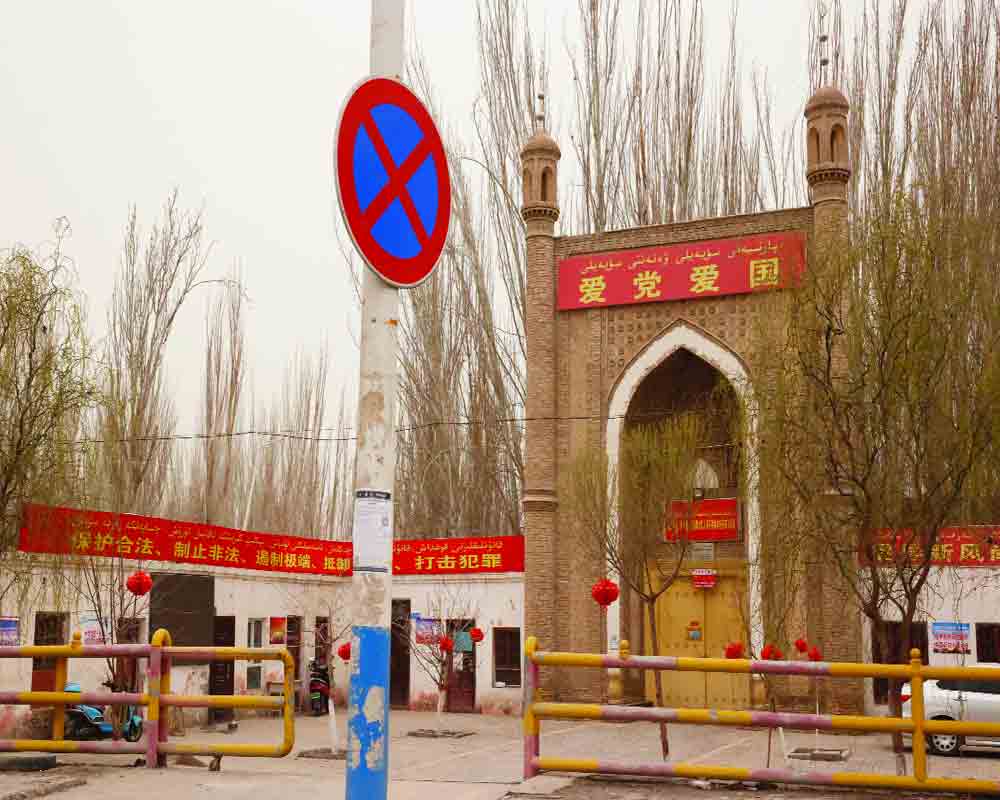 What is happening in Xinjiang is worrisome, anti-human and is kind of genocide by the Chinese authorities just under the guise of controlling Islamic terror in the province. The actual power and dignity of a modern nation lies in securing the basic rights and freedom to its own people first. It is time for Chinese President Xi Jinping to learn and practise. Instead of inculcating his line of thought into the Chinese children, he must see to it that the Hongkongers, the Tibetans, the Uyghurs and millions of Chinese people clamouring for basic rights in the mainland get their due

China’s mass detention of the Uyghur Muslims and other minorities in the western province of Xinjiang has sparked condemnation and alarm around the world. It is now no secret that the Xi Jinping regime is up in arms against these hapless minorities. Today, the brutal surveillance over the minorities in this province is done with sophisticated weapons, spying and policing, directly controlled by Beijing. Officially known as the Xinjiang Uyghur Autonomous Region (XUAR), it is the largest provincial unit of China today. It accounts for almost one sixth of the territory of modern China. However, though not recognised by Beijing, the Uyghur Muslims call this land as the East Turkistan, instead of XUAR.

This week has witnessed a roar of more than 40 nations at the UN General Assembly raising concerns over China’s continued torture of the Uyghur Muslims and other minorities in Xinjiang. The 43 countries that signed the statement criticising China expressed strong concern at credible reports of the existence of “re-education camps” in Xinjiang which Beijing flatly denies. It was the third time in the last three years that the US and all its European allies used the Human Rights Committee of the UN General Assembly meeting to criticise China over its torture of the Uyghurs. Meanwhile, Cuba, another communist nation from South America, immediately asserted, with a group of 62 nations, saying that Xinjiang is an internal matter of China. However, what Cuba is wrongly forgetting is that human rights violation is an international affair, and securing such rights is very much inscribed in the UN Charter itself. Such attempts by Havana and other nations are against the basic tenets of international human rights, and send a disturbing signal to the millions, including the Uyghurs, who are crying for justice. Precisely, China’s architecture of repression must be put to an end.

Mainly, the Uyghurs have to undergo a unique training in “re-education camps” by the communists in Beijing in which, apart from other tortuous activities, it is compulsory for the Xinjiang residents to participate in compulsory unpaid labour known as “Hashar” in the region. The officials do not pay them for their labour and they have to bear the cost of their own transportation. Unfortunately, the Uyghur families that do not have an able working member are also not exempted from the system. Men and women those who are above 70 years and children as young as 12 years are dragged to work in these horrifying camps. Sometimes it so happens that the Uyghur secondary school students are forced to work in the camps just to fulfil the work quotas devised by the local authorities in the XUAR. Besides, the police in the area keep a strong vigil over the use of internet (though it is almost banned), particularly by the youths for attempting to do something subversive or extreme. Sadly, the local authorities have forced the Uyghur farmers to sell their agricultural produce below the market price to them. This is pushing thousands of Uyghur families into abject poverty. Now it has become a commonplace trend that most of the Uyghur assets, including farmlands and other assets, are first confiscated by the Government agents and then redistributed to the Chinese migrants coming to the region from various parts of the mainland. And if the Uyghurs complain or try to resort to legal remedies to reclaim their ancestral properties, they in turn are arrested for violating ethnic harmony in the XUAR.

Much more than what is the most disturbing trend in the XUAR is the extreme suppression of religious freedoms of the Uyghur Muslims. They are even not allowed to grow their beards and the number of hours they can spend in the local mosques is also restricted. According to the Chinese Government agencies, keeping a beard is a sign of being an extremist. The saddest part of the region is that most of the old Uyghurs are not aware about their basic rights. The reason behind is that they have never been given these rights and the lack of basic education play a big role in the whole saga of torture. Again, the Xi regime came out with an order that strictly bans keeping beards and conducting the traditional marriage ceremony of the Muslims called Nikah in the Xinjiang province. In fact, the Chinese authorities announced a system of rewards, some exceeding more than 50000 Yuan (USD 7500), for whistleblowers who reported on Uyghurs’ religious activities, including keeping beard and practising Nikah. Even the Uyghur parents are not allowed to give their newborns Muslim names. Many of the Muslim shop owners are forced to sell alcohol and cigarettes in the Hotan Prefecture so as to weaken the spirit of Islam in the region. No one is allowed to teach the Quran outside the mosques. And children below 18 years cannot enter the mosque and often imams are punished for practising Islam at home. During the time of the holy month of Ramzan, each year popular festivities related to it are banned in the XUAR. The workers are forced to participate in educational activities on atheism. The Government servants, students and anyone working for the Chinese Communist Party are prohibited from celebrating the Ramzan. Finally, the Uyghur women are sometimes  forced to abort their children so as to keep an eye on the growth of their population. And today, the Uyghurs are not permitted to leave China. What is happening in Xinjiang is worrisome, anti-human and is kind of genocide by the Chinese authorities just under the guise of controlling Islamic terror in the province.

The Uyghurs are of Turkic origin ethnic group and are predominantly Muslims. Most of them live in around Central and East Asia. As per the latest estimate, nearly 12 million Uyghurs live in China’s Xinjiang region. They are primarily Sunnis. However the origin of the Uyghurs has become a contested piece of history between the Uyghur scholars and the Chinese historians. According to the Uyghur experts, they lived in the Tarim basins on the edges of the Taklamakan desert for more than a millennium. They say they have been inhabiting there for thousands of years now. But the Chinese scholars claim that the Uyghurs migrated to China only in the 9th century. In fact, the Uyghur Khaganate or the Uyghur Empire (self-defined as Toquz Oghuz country) ruled over the vast swathes of the present Xinjiang, Manchuria, Mongolia and the adjacent territories in the 8th and the 9th centuries. Records show that it was one of the largest empires created in Medieval Eurasia. At its height in the early decades of the 9th century, it stretched from Western Central Asia to Korea. China first gained control over the Tarim Basin during the Han Dynasty in the 2nd century BC. But once again China controlled that region during the regime of the Tang Dynasty in the early Middle Ages. Today China claims that the region belonged to it much before the very presence of the Uyghurs there.

Finally, China conquered the Xinjiang in the middle of the 18h century during the region of the Qing Dynasty, the last empire that existed before the advent of the People’s Republic of China under the legendary Mao Zedong. Since then the Uyghurs and the other minorities living in the Western Province have been organising various independent movements to move out of China’s control. Of course, these attempts have been brutally suppressed by Beijing with its large military and now with intelligence apparatus. Thus, the Uyghurs are finding no way out except bearing the brunt of the red China.

So far many of the global human rights bodies and organisations have revealed classified Chinese Government directives that laid operational plans for carrying out detention and other anti-human activities against the minorities. Interestingly all these are backed by extensive data collection by secret government agencies which take the help of artificial intelligence as well.

Will China listen to the world? Can there be basic freedom for the minorities in Uyghur? China will never listen to any international organisations, including the UN and its agencies. At present, there can be no hope that the Uyghurs will be given their due rights to live a civilised life. But then Beijing is projecting itself as a world power and fast trying to take over the mantle from America. What Xi is planning displays his utter foolishness. The sadist agenda will take China nowhere. Extreme form of aggression and an attitude to influence each corner of the world does not really show the real strength of a civilised nation in the 21st century. The actual power and dignity of a modern nation lies in securing the basic rights and freedom to its own people first. It is time for Xi to learn and practise. Instead of inculcating his line of thought into the Chinese children, he must see to it that the Hongkongers, the Tibetans, the Uyghurs and millions of Chinese people clamouring for basic rights in the mainland get their due. Today, the Chinese Communist Party, Xi and his cronies are simply spreading terror and extreme form of aggression over the Uyghur Muslims, nothing else.