Syrian quagmire: How long and for what?

Syrian quagmire: How long and for what? 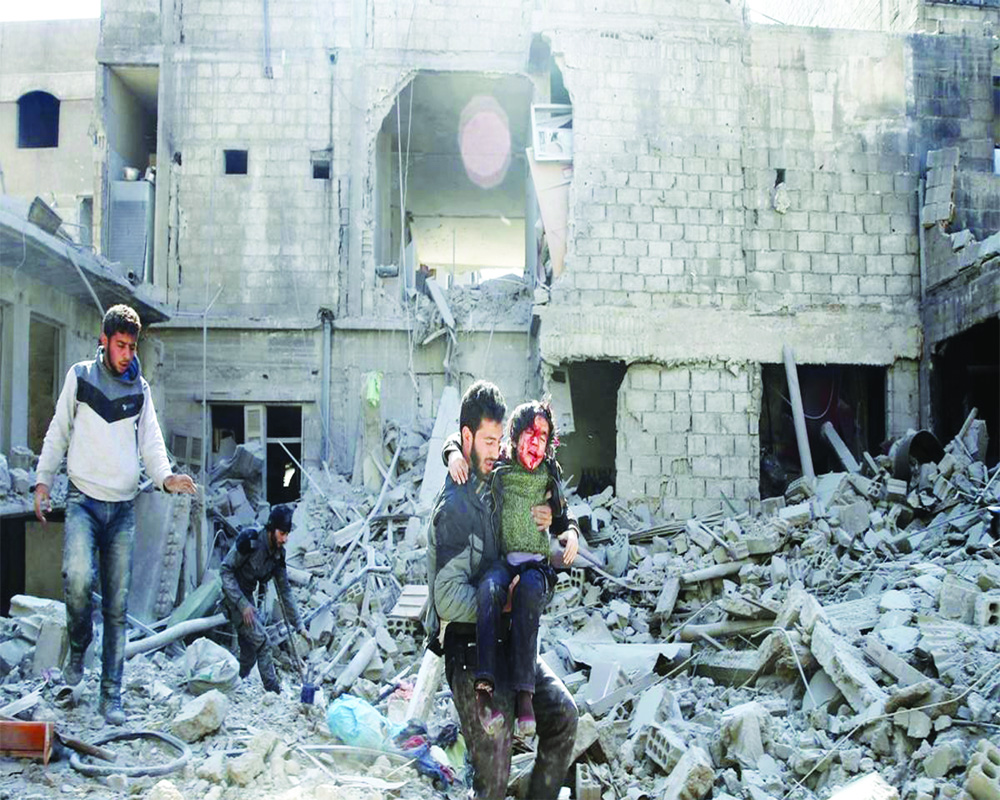 The failure of the UN-led efforts to bring the warring parties to the negotiation table last month in Geneva has once again brought war clouds over Syria. Only with the collective efforts of the US, Russia, Iran and Turkey, peace can be brought to war-torn Syria. Also it demands a new approach with a purely humanitarian concern

The Syrian Civil War started as a non-violent uprising in the middle of March 2011. Today it is a full-fledged war which involves several nations and world’s prominent jehadi outfits such as Islamic State (ISIS), al-Qaeda and splinter groups of these two mainstream groups. However, the Baathist Syrian Arab Republic headed by President Bashar al-Assad has survived a decade in power despite military challenges from all corners of the country.

Estimates emerging from various human rights agencies and independent media reports say that by end of December last year, the death toll in the war was between 3,87,000 and 5,93,000. The UN reports that more than 5.6 million have already fled the country and over 6 million have been internally displaced so far.

Although many complex events pushed the Syrians into this war, one that stands out is the historic Arab Spring, started in the early months of 2011. This 21st century movement mainly inspired by digital platforms across North Africa through the West Asia finally triggered the uprising in Syria. But then quickly, the Arab Spring had turned into mass gathering in the form of non-violent protests against the authoritarian and family-ruled regimes in all these countries.

In Syria, in the month of March, 15 schoolchildren were arrested and tortured for writing graffiti which was rightly inspired by the Arab Spring. One of the boys was killed as well. The arrest of these schoolchildren sparked outrage across Syria. Soon after, people came out on the road and demanded the release of all the children and raised slogans for basic freedoms for all in the country. The Assad regime responded by killing many protesters and this led to the demand for his resignation by the demonstrators. Subsequently, the clashes broke out between the masses and the supporters of the Government. This gradually spiralled into the full-blown war, what the whole world is witnessing today, involving terror groups of various nations of the world. But at its heart, the conflict highlights the tragic Shia-Sunni divide among the Muslims in the entire region.

The failure of the UN-led efforts to bring the warring parties to the negotiation table last month in Geneva has once again brought war clouds over this West Asian nation. The United Nations should take the lead and restart the Geneva process. So far, the UN strategies have broadly failed for Syria. If it moves in the same direction, can it be so that the organisation is complicit in the crimes committed by the Assad regime?

Now, what America is doing to bring peace to Syria is that it is back again. The latest American strike in Syria has signalled President Joe Biden’s new war game in West Asia.

The so-called messenger of peace and reunion of America badly divided by former President Donald Trump, Biden is now targeting Iran-backed militias in Syria. His administration is justifying the attack as the missile sallies are directed towards rebels that are propping up the Assad regime. The US Air Forces dropped 500-hundred-pound joint direct attack munitions at a crossing used by Iranian backed groups reportedly killing 17. The particular groups hit by the limited US strike are Kataib Hezbollah and Kataib Syyaid al-Shuhada. Meanwhile, Deniss Ross, a former Senior US official and West Asian expert, says the attack was designed to show that there would be a military response if US forces were targeted, or the militias continued to strike. The Assad administration was quick to remind Biden that the American attacks were a cowardly act and urged Biden not to follow the law of the jungle.

The country’s Foreign Ministry condemned the attack on areas in Deir al-Zor, near the Syrian-Iraqi border. The statement released by the Ministry highlighted that Biden Administration is supposed to stick to international legitimacy, not to the law of the jungle as did by the previous administration.

It’s really ironic that Biden and Harris, the duo is repeating what once Trump simply did. When Trump ordered a strike on Iran in 2019, Biden sharply reacted and tried to offer a sermon to him: “Trump’s erratic, impulsive actions are the last things we need as Commander-in-Chief. No President should order a military strike without fully understanding the consequences. We do not need another war in the Middle East, but Trump’s actions toward Iran only make that likely.”

And what Biden is doing now? He knows very well how an American President responds to the crisis zones in the “Middle East”. Precisely, nothing has changed in Washington, except the man giving orders. What Obama did, Trump followed and now Biden is taking it forward. America clearly has no strategy for the West Asia and North African (WANA) region. Its policy towards the region is outdated and dangerous. It’s meddling carelessly with Iraq, Iran and Syria. Washington has no coherent policy to deal with Tehran, Damascus and Baghdad. So obviously, finding out a solution for the Syrian war demands a new approach with a purely humanitarian concern.

Only with the collective efforts of the US, Russia, Iran and Turkey, peace can be brought to war-torn Syria. Biden’s engagement with Putin, Erdogan, Rouhani and Kadhimi (Iraq) would matter the most in bringing a permanent solution to the chaos in Syria. That is why the stability in West Asia demands more than a deal with Iran from Washington. The experts and policy practitioners opine that regional issues in this part of Asia could no way be comprehensively addressed.

They all agree that Iran would no way concede its sustained support for regional proxies and halt its ballistic missile programme in the near future. It is widely felt that isolating Iran was purely counterproductive. So to address, Tehran’s troublesome behaviour in the region, it is better to handle each regional conflict through separate and parallel platforms at the same time.

Why is Moscow equally concerned about the chaos in Syria? It is not only to save the embattled Assad regime, an old ally of Russia, but also to stave off the growth of the Islamic terror in Russia. Hence, the Syrian conflict is not just a faraway battle for Putin regime. The life-time monarch is longing for stability at any cost. He knows fully well that the jehadists may get enough ground for their subversive models in his vast country. Of course, this might alter Putin’s long-term strategies to keep the opposition and western pressure at bay. His regime is not best equipped to counter the  ISIS, the way it is raging its ugly head in the WANA region. Russia’s relationship with Syria dates back to 1950s and the Cold War. In those days, the USSR used to train the top brass of the Syrian military.

What lies ahead in Syria? By 2020, the Syrian civilians faced another year confronting life-threatening challenges. It is all about their survival as all of them are fighting for basic amenities such as food and medicines.

However, the last year saw the discernible decrease in violent conflicts across the country. But this does not mean that warring groups are retreating. No single rebel group is considering withdrawing from the war zones. The reason behind is that all these groups are backed by strong allies and they want to pursue the war till the fall of the Assad Government.

The Human Rights Watch notes, “With the unprecedented depreciation of national currency, the imposition of further international sanctions and crises in neighboring countries, the Syrian economy went into freefall for much of 2020. For ordinary Syrians, this translated into an inability to procure food, essential drugs, and other basic necessities. As a result, more than 9.3 million Syrians have become food insecure and over 80 per cent of Syrians live below the poverty line.”

This correctly reflects the situation on the ground and insurmountable challenges faced by the millions who are caught between warring zones.

Only way to solve the imbroglio in Syria is to establish a UN-backed transitional regime and pressurise Assad to step down. A presidential election is meant to be taking place in Syria this summer. It would be a total disregard to millions of those who are suffering and a sham on global governance platforms such as the UN. The world body is not talking anything about this. And it is abandoning the Geneva peace process.

In fact, the Syria Constitutional Committee that demands a political process would be useless if the UN does not stop the upcoming presidential poll for Assad. This election would offer full immunity and legitimacy to the torturous and autocratic regime in Damascus. It’s time to act. Ensure that no more civilians die. There is no need to secure peace when hardly anyone will be there to share the joy of the same. Washington should not employ the old tactics to handle the dictators in WANA.